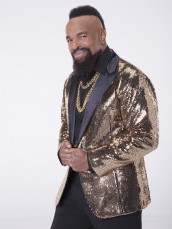 DWTS' Most Memorable Night had lots of tears before booting Mr. T out of the competition 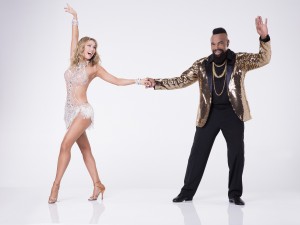 By far my favorite night on DANCING WITH THE STARS is “The Most Memorable Year” night. Filled with emotion and honesty, it’s the night where we truly get to see the contestants for who they really are and where they came from, whether it be twenty years ago or, in the case of Mr. T, sixty four years ago. Sadly, Mr. T ended his run on DWTS tonight, along with his partner Kym Herjavec, but, oh what a run it was indeed. We saw a vulnerability in him that few have ever seen which is what the show demonstrates so well, a truthfulness and honesty in bearing your soul to the world. Rashad Jennings & Emma Slater epitomized that in their beautiful Contemporary that scored them an “almost” perfect score, thanks to Len Goodman. Heather Morris and her fill in partner, while Maks Chmerkovskiy is still on the mend, Alan Bersten came in third with 35 points while Simone Biles & Sasha Farber ended the night in second with 36 points. Stay tuned, next week is Disney night.

Heather Morris (Dancer) and her partner (Alan filled in for an injured Chmerkovskiy) Maksim Chmerkovskiy
Exuberant! Carrie Ann Inaba said she was on point with her Cha Cha. Len Goodman said it was sharp. Julianne Hough said she nailed it and Bruno Tonioli said she was perfect.
Scores: Inaba – 8, Tonioli – 9, Hough – 9, Goodman – 9, Harland – 9

Mr. T (TV personality) and his partner Kym Herjavec
Proud. Inaba was brought to tears. Goodman called him and his partner the A Team. Hough was choked up too while Tonioli thought his Waltz deserved a lot of love and respect.
Scores: Inaba – 7, Tonioli – 7, Hough – 7, Goodman – 7, Harland – 7

David Ross (Major League baseball player) and his partner Lindsey Arnold
So sweet! Inaba called him uplifting. Goodman gave him the thumbs up sign. Hough said he was on his game with his Viennese waltz. Tonioli said he is a vital competitor.
Scores: Inaba – 7, Tonioli – 8, Hough – 8, Goodman – 8, Harland – 8

Simone Biles (Olympian Gymnast) and her partner Sasha Farber
Lovely. Inaba said her Viennese Waltz was breathtaking. Goodman called it her best. Hough said it was one of her favorites. Tonioli called her adorable.
Scores: Inaba – 9, Tonioli – 9, Hough – 9, Goodman – 9, Harland – 9

Nick Viall (Bachelor star) and his partner Peta Murgatroyd
His best! Inaba said he was more grounded in his Rumba. Goodman said he still has a way to go. Hough saw a calmness within him. Tonioli said they finally connected.
Scores: Inaba – 8, Tonioli – 7, Hough – 8, Goodman – 7, Harland – 7

Rashad Jennings (Football player) and his partner Emma Slater
Wow! Inaba told him he was a born dancer. Goodman loved the concept. Hough had no words and Tonioli was mesmerized by his Contemporary.
Scores: Inaba – 10, Tonioli – 10, Hough – 10, Goodman – 9, Harland – 10

Who Went Home: Mr. T and Kym Herjavec
Who Has Legs to Take Home the Mirror Ball: Three words – Rashad, Rashad, Rashad! Simone in an Olympic gymnast two-peat or Normani, although Heather is creeping up to all of them.