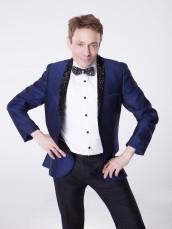 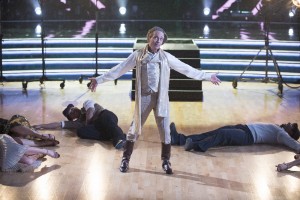 It’s only week two on DANCING WITH THE STARS: Season 24 and already we have an injury – Maks Chmerkovskiy hurt his calf, a potential romance – Bonner Bolton & partner Sharna Burgess are heating up the dance floor and a crazy person trying to disrupt the show – Charo every chance she gets. And, oh yea, there was grumpy Len Goodman who was more Scroogelike with his scores tonight giving mostly fives and sixes. Speaking of poor scores, the first kicked out of the competition this week was sorely based on low, low, low scores – Chris Kattan & Witney Carson ended their run prematurely and yet appropriately. At the top of the leader board Rashad Jennings & Emma Slater and Normani Kordei & Val Chmerkovskiy tied with 32 points each. Stay tuned for next week.

Heather Morris (Dancer) and her partner (Alan filled in for an injured Chmerkovskiy) Maksim Chmerkovskiy
Up her alley. Carrie Ann Inaba called her fierce. Len Goodman said her dance was not a Jive but rather Hip Hop. Tonioli said half of it was brilliant. Hough thought it was great.
Scores: Inaba – 8, Tonioli – 8, Hough – 8, Goodman – 6, Harland – 8

Erika Jayne (Dance club artist) and her partner Gleb Savchenko
Solid. Inaba said she had good balance. Goodman said it was full of glitz. Hough said she has such a presence. Tonioli said it was beautiful.
Scores: Inaba – 7, Tonioli – 7, Hough – 7, Goodman – 7, Harland – 7

David Ross (Major League baseball player) and his partner Lindsey Arnold
Awesomely fun. Inaba wanted him to get bigger in his Cha Cha. Goodman told him to work on his footwork. Hough called him charismatic. Tonioli said he put on a show.
Scores: Inaba – 7, Tonioli – 7, Hough – 7, Goodman – 6, Harland – 7 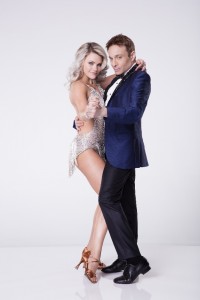 Charo (TV personality) and her partner Keo Motsepe
Flashy. Inaba said she loved her. Goodman said she had fire and flair. Hough thought she had great energy. Tonioli thought her Paso Doble was like a tornado.
Scores: Inaba – 6, Tonioli – 5, Hough – 7, Goodman – 6, Harland – 6