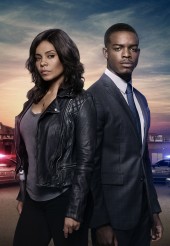 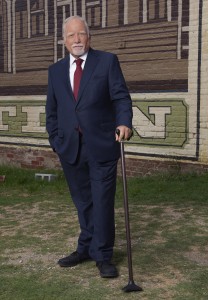 Fox Network’s ten-episode Wednesday-night limited series SHOTS FIRED is created by the married filmmakers Gina Prince-Bythewood and Reggie Rock Bythewood. The show deals with the fallout in a small North Carolina town when the police force’s only black officer shoots a white teenager, shortly after a black teenager has been killed. A special prosecutor (Stephan James) and his tough investigator (Sanaa Lathan) are brought in to handle the police shooting, as the situation becomes more complicated and volatile by the hour.

Prince-Bythewood and Bythewood are also executive producers, writers, directors and show runners on SHOTS FIRED. Prince-Bythewood is known for writing and directing LOVE & BASKETBALL, BEYOND THE LIGHTS and THE SECRET LIFE OF BEES, and directing the HBO adaptation of Terry McMillan’s novel DISAPPEARING ACTS (LOVE & BASKETBALL and DISAPPEARING ACTS both star SHOTS FIRED lead Lathan).

GINA PRINCE-BYTHEWOOD: Yeah. It’s really two reasons. One, in terms of it being the “in” to our show, it was about, it’s very easy for people to see these shootings on the news, and if you don’t identify with these victims, who are black, it’s very easy to turn the channel, because you’re not identifying with them. So we thought, “If we switch the narrative, those that don’t normally go through what we go through can feel what we feel.” And if you can do that, you can start empathizing. But we are also dealing with two murders – the murder of a white teen and the murder of a black teen – in the same show. So it also gave us an opportunity to show the difference of how these two cases are handled, with both the community and the media, which you see reflected in real life as well.

AX: Once you had those two plot anchors, was it difficult to figure out what all of the connective tissue should be?

PRINCE-BYTHEWOOD: We put together a seventy-page bible which had the whole story. So going in, before we wrote any scripts besides the pilot, we knew where we wanted to go. So, obviously, I’m not going to ruin it, but we know how they’re connected. The hardest thing was, we have so many characters and so many character arcs, how do you weave that in with the two mysteries and the social drama aspect of it?

AX: How do you collaborate with Reggie Rock Bythewood?

PRINCE-BYTHEWOOD: We’ve been collaborating on everything since A DIFFERENT WORLD, our first job. That’s how we met. So our whole relationship has been working together and really trying to make each other better as writers. This is the first time we’ve worked this closely. I’ve produced one of his films [BIKER BOYZ], he produced BEYOND THE LIGHTS, but this is both of us doing everything together. And TV is really, really hard, mostly because you do everything at the same time – writing, directing, producing, and editing. The fact that there were two of us, and that we trust each other, so I could be on set, and he could be in the writers’ room, and I know he’s handling it there, and he knows I’m handling set, it just made it so much easier. And also, our vision is so similar. It has to be. So we’re both on the same page about everything, and it’s just a comfort. You always have to fight, and you know you have somebody who has your back.

AX: What was your writers’ room like on SHOTS FIRED?

PRINCE- BYTHEWOOD: We had a small writers’ room, and we were very particular about who we wanted in it. At their core, they had to be passionate about the material. So it was exciting to put the room together. One of the writers was a police officer in Chicago for a year. One woman, her father was a mayor. And so just putting these pieces together, it was exciting, because you want to create a really great room.

AX: In doing research for SHOTS FIRED, was there anything that really surprised you?

PRINCE-BYTHEWOOD: A lot of it was pulling from our personal lives, but the research that we did was very extensive. One of the most important things was, we met with Wanda Johnson, who’s the mother of Oscar Grant [a young black man who was killed by police], who the movie FRUITVALE STATION was made about. Meeting with her for two hours was so – we were all in tears. It grounded all of us and showed us the responsibility when you’re putting a story like this out, how important it is to get it right, and just some of the things that she said as a mother who lost a child, and you have all this rage, because the people who did it are not being punished. That definitely added to the storytelling.

Also, the woman who Sanaa’s character [is based on], we got a lot of things from. She’s an investigator for the DoJ, and she is a badass, and she worked the cartels, and her view on life is so fascinating, given everything that she’s seen, and being able to put so much of her life experience into Sanaa’s character adds something really exciting.

AX: You have two different grieving mothers in SHOTS FIRED. Do you find that grief is universal?

PRINCE-BYTHEWOOD: Absolutely. That’s what was so beautiful about the relationship between Shameeka and Alicia, [who are respectively played by] DeWanda Wise and Jill Hennessy. And to see the evolution of their relationship throughout the ten hours, and honestly, the actresses’ friendship, because they were doing the same research and feeling the same things and leaning on each other – grief is universal, and it’s one of the things that Wanda Johnson spoke about that DeWanda and Jill talked about, which is, they’re suddenly members of a club that nobody wants to be a part of, and only the people in the club can understand what you’re feeling. So that was a very big bonding thing for them.

AX: With what’s going on politically in the United States right now, what do you think the responsibility is of filmmakers, and is there anything that you’re looking at doing differently because of what’s happening?

PRINCE-BYTHEWOOD: I can’t speak for all filmmakers. I know for me personally, and for Reg, I went through all my stages of grief, and now I’m ready to fight. And the way that we can fight is through our art. When you’ve got art as a weapon, and one, we’re excited that SHOTS FIRED is going to be put into the world, and counter some of the things that are going to be said by [the current administration]. We have to fight as artists, but we’re excited about SHOTS FIRED and the conversation that it sparks, and also, we both have projects that we’re going to do that are also going to help speak [to what is going on].

AX: Can you say anything about your next project?

PRINCE-BYTHEWOOD: I can’t say yet, but it’s a film.

AX: And what would you most like people to know about SHOTS FIRED?