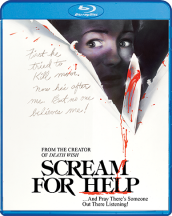 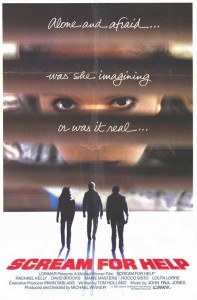 Essentially an R-rated Afterschool Special, the film focuses on teen Christie Cromwell (Rachael Kelly) who is deeply suspicious of her mom’s new husband Paul Fox (David Brooks). With strange events happening around the house, she starts to suspect he’s trying to kill her and her mom for inheritance money.

During the first half of the film, Christie plays amateur detective, catching Paul cheating on her mom among other questionable things. The film takes a wild mid-way point detour and suddenly becomes a home invasion movie where Christie’s suspicions come true and she and her mom are held captive until Paul and his criminal cronies plan their deaths to look like a burglary gone wrong.

Toss in some pre-HOME ALONE resourcefulness on Christie’s part and SCREAM FOR HELP is intermittently interesting, but otherwise suffers under the weight of the misguided direction of Winner. The director doesn’t know whether he’s making a teen angst film, a horror film, a thriller or a black comedy. This is even more apparent in the over-the-top performances by everyone involved.

Brooks is a stand-out, playing slimy, creepy and doting husband quite effectively and the only other notable thing about the film is a script from FRIGHT NIGHT helmer/scribe Tom Holland. 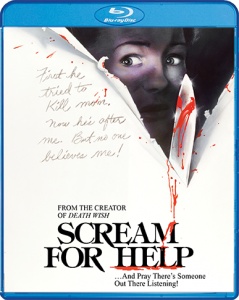 While SCREAM FOR HELP went largely forgotten for many years, there’s been a resurgent and re-evaluation of it over the last decade – but primarily for being so campy and bad.

Still, Shout! Factory treats this film with the same respect it does other re-releases. Boasting a nice film transfer, the movie also has some illuminating interviews with actor Brooks and Holland. Holland in particular is brutally honest in how bad the film turned out compared to his script. This frustration led to him demanding he direct his script for FRIGHT NIGHT which is probably the biggest positive that came out of SCREAM FOR HELP being produced.

Additionally, there’s audio commentary from Hysteria Lives! which have a podcast and website devoted to reviews of cult slasher films and more.

SCREAM FOR HELP may not be the top of any slasher film aficionado’s must-watch list, but you can’t fault Shout! Factory for shedding light on another overlooked 1980s thriller.