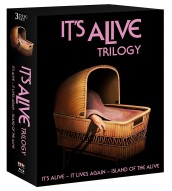 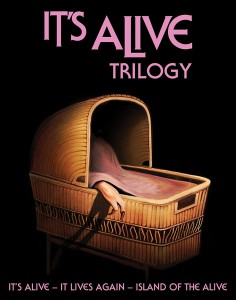 Writer-Director Larry Cohen (Q, THE STUFF, GOD TOLD ME) has made some pretty amazing films throughout his eclectic career and he’s done so by experimenting with genre tropes and twisting them into films that always feel out of the box and quite unique.

Outside of the MANIAC COP movies (which he wrote and produced, but did not direct), his biggest franchise as a director was the IT’S ALIVE trilogy of films which now make their Blu-ray debut in a wonderful new set from Shout! Factory. 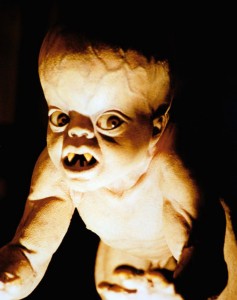 1974’s IT’S ALIVE is a suspenseful, creepy horror film about a couple Frank Davis (John Ryan) and his wife Lenore (Sharon Farrell) give birth to a hideous monster due to use of faulty contraceptive drugs.

Upon birth, the claw-hand baby takes out the doctors and nurses brutally before the Los Angeles police department goes on a manhunt. Frank has a hard time accepting the baby as his child and has a cold detachment towards it, especially as everyone is trying to kill it, but Lenore still has motherly instincts and the baby eventually finds its way back home.

While the movie has its share of horrific moments, the movie is also interested in mixing in social commentary and other left field notions of what is human and what is a monster. Ryan is particularly good as the conflicted parent and Cohen wisely keeps the Rick Baker created monster in the shadows – leaving much of the horror to the imagination. It’s the JAWS approach, which is the less you show, the more you think you see. Add to that a memorable score from Ennio Morricone, and IT’S ALIVE holds up as a solid 1970s horror film. 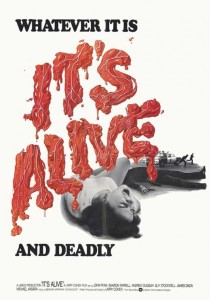 IT LIVES AGAIN followed in 1978 and picks up the pieces from the first movie. This time Ryan visits Eugene and Jody Scott (Frederic Forrest, Kathleen Lloyd) in Arizona to warn them that their future baby may end up just like his. They don’t believe him initially, but soon realize Ryan is telling the truth. With warring factions (those that want to destroy their baby, and those that want to keep it alive to study it), IT LIVES AGAIN is another interesting and unexpected journey. Cohen doesn’t play it safe, and IT LIVES AGAIN could even be called Cronenbergian, even though Cronenberg’s major commercial successes were still a couple of years away.

Almost a decade passed before the final film arrived in 1987 – IT’S ALIVE III: ISLAND OF THE ALIVE. Warner Bros. wanting to jump start their direct-to-video division gave Cohen a two picture deal to create a third IT’S ALIVE film as well as the RETURN TO SALEM’S LOT sequel. Both of those films starred Cohen’s 1980s muse Michael Moriarty 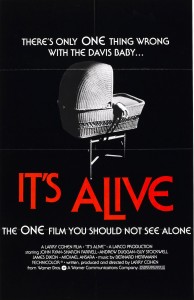 ISLAND OF THE ALIVE is much goofier that its predecessor featuring a wonderfully twisted and idiosyncratic performance by Moriarty as Jarvis, a failed actor whose mutant offspring is part of a high-profile court case where he pleads to save his unborn child. It’s a great kick-off to a film that soon finds the Judge sparing the kid’s life and sending “It” along with other mutant progeny to a remote island. Five years later and an expedition is turns into a bloodbath as we discover the “babies” have evolved. They eventually hijack a boat (steered by Jarvis) to Cape Vale in Florida where their real purpose is revealed. 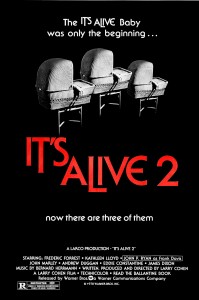 ISLAND OF THE ALIVE is strange and gloriously addicting including some bizarre detours including Jarvis finding himself in Cuba. Once again, the effects are kept to a minimum, to not draw too much attention to the low budget nature of the creature effects, but it really is Moriarty’s performance that keeps the film “alive” so to speak. ISLAND also commits a similar sin that 1989’s FRIDAY THE 13th VIII: JASON TAKES MANHATTAN did in that even though it’s called ISLAND OF THE ALIVE, like MANHATTAN, only a small portion of the runtime is set where the title promises it will take place. 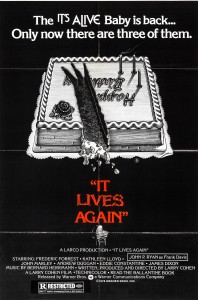 The Shout! Factory Blu-ray is quite nice featuring commentary by Cohen on all three films, a clips from a 40th Anniversary screening at the Nuart theater in Los Angeles, trailers, TV and radio spots, a making of featurette and stills gallery.

The most interesting aspect of the featurette is the discussion of the rather curious history of IT’S ALIVE, which was buried during its original 1974 release. Warner Bros. had no faith in it, barely released it and only once the previous regime was fired did the film get dusted off in 1977, given a new campaign and became a huge hit for the studio. Rarely do films get a second chance, particularly three years after its initial release, but that was the power and strange charms of this offbeat movie. The second campaign was also stellar and still quite potent to this day – the baby crib with a mutant hand hanging over the edge. The other admirable thing is how much blood, sweat and tears Cohen put into these movies. He created the clever title sequences in a very low-budget way, and a good portion of the first two films were shot on his property. 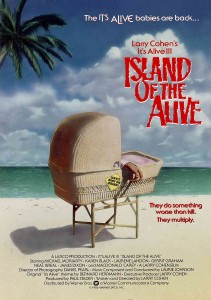 IT’S ALIVE may not have the instant recognition as other 1970s horror films THE EXORCIST and THE OMEN, it still packs a considerable punch and it’s great that they’re finally available in HD on Blu-ray and are given the opportunity to “live” again.