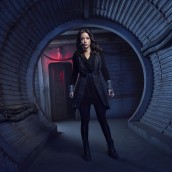 The actors talk about the latest season of Marvel 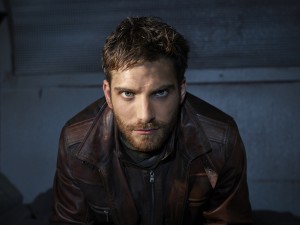 MARVEL’S AGENTS OF SHIELD has its fifth-season finale on Friday, May 18, with an episode ominously titled “The End.” However, fans should take heart – ABC has announced that Season 6 will air in the summer of 2019.

Meanwhile, Chloe Bennet and Jeff Ward have both had an eventful year on MARVEL’S AGENTS OF SHIELD. Bennet plays Daisy Johnson, aka Quake, a super-powered Inhuman who accidentally wound up with her friends in a future where she learned that she’d literally broken the world. Now that she’s back in the present, she’s been working to prevent that from happening. Ward (CHANNEL ZERO: NO-END HOUSE) plays Deke, a resident of the future Daisy visited; when she and the gang return to our era, Deke is surprised to find that he’s tagged along, and enjoying everything our world has to offer, from fresh air to bar snacks.

Bennet and Ward are hanging out together at a party thrown by ABC for the Television Critics Association (TCA) press tour, so they give a joint interview.

ASSIGNMENT X: Season 5 has had aliens, man-eating space “roaches,” spacecraft and time travel, which gives it more conventional science-fiction aspects than it’s had before …

CHLOE BENNET: Interesting. The more sci-fi that we’ve been going, the more grounded I feel like my choices have been – not something that I’ve intentionally done, but the more insane the scenarios are for our characters, it’s felt more organic to play, “This is crazy,” and ground that, however crazy, whatever world we’re in, whether we’re in the Framework [a real-seeming virtual world, or dealing with] Ghost Rider.

AX: At first, I had the impression that Deke, who is human, might actually be an alien …

JEFF WARD: I could be. I’m waiting for the scene where I rip off my skin face. We don’t know.

AX: Your costar Clark Gregg, who plays Phil Coulson, directed the “Fun & Games” episode this season. How is he as a director?

BENNET: Clark Gregg as a director is incredible. Throughout the series, I’ve always looked at Clark as a guide creatively and as a mentor on set, because every eight days, we have a new director come in and out. He’s really been a staple for me throughout the series, so having him direct an episode didn’t feel that crazy, because I’ve always kind of looked at him as a leader, on and off screen. The only difference was that he basically gave us permission to play more, and to bring different nuances to scenes that I wouldn’t have probably had the opportunity to do before or have thought to do before, and because he’s spent so much time with us as actors and he knows where we thrive, whether it’s bringing out a comedy bit, or being like, “Why don’t you really mean this, rather than say this sarcastically?” So there were a lot of little tricks – he had a good strategy with us, and I think he really elevated the script in a way I don’t think any other director could have done.

WARD: And Chloe crushes it in that episode. I got chills.

AX: Daisy is often sort of the audience focal point and point of normalcy. Do you ever wish you could be an LMD – that is, a life-model decoy, aka an android copy of Daisy – or a Framework character, or do you enjoy being the relatively normal character?

BENNET: I think having the superpowers is enough craziness. I guess you’re right. I was an LMD for a brief moment. I guess the bigger one was when I was under Hive’s spell. I really did not like doing that, so no, I do not wish I could do that, I wasn’t a fan of that.

AX: Who is the character on your t-shirt? 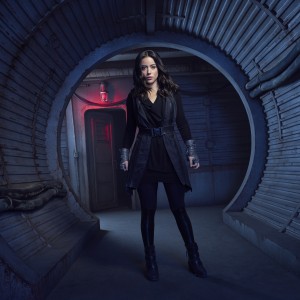 AX: You just joined MARVEL’S AGENTS OF SHIELD this season …

AX: Were you watching MARVEL’S AGENTS OF SHIELD before you became involved with it?

WARD: A little bit, but not as religiously as I have since joining. I’ve become a very big fan of the show.

WARD: Well, it was good, because I think if I had watched the show, I probably would have been nervous, I would have been very nervous for it. Now that I know everything about Fitz [Iain De Caestecker] and Simmons [Elizabeth Henstridge] and the Framework and all the LMDs and the Ghost Rider, I know the whole thing, so it’s a big mythology there now.

AX: Have you worked before on shows where there is this much CGI?

WARD: Not like this, not that we interact and see as much. I’ve done some stuff like that, but it was more practical, so this is the first time that I’ve had so much CG. I think [visual effects supervisor] Mark Kolpack and the whole VFX team, they’re incredible. Because on a TV budget, they get some movie-looking CGI, so it’s cool. 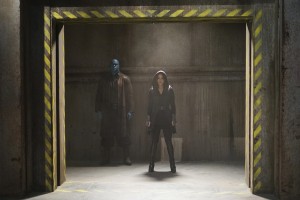 BENNET: Yeah. I did a movie called VALLEY GIRL, which is a remake of the original from the ‘80s, with MGM. That comes out June 29.

AX: And what would you most like people to know about Season 5?

WARD: That I honestly think that it might be the best season of the show yet, and there is some great stuff that fans and people new to the show will like. It’s great, it’s a fun ride.

BENNET: Season 5 – if you are a long-term fan of the show, it really delivers on an emotional front. It’s one of the biggest, most drastic seasons that we’ve had so far.