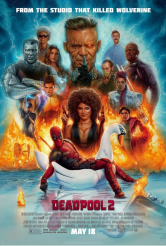 Funny, but arguably a little too meta for the running time 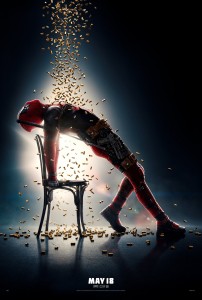 DEADPOOL 2, should there be any doubt, is the sequel to 2016’s DEADPOOL. Both are based on the comics created by Rob Liefeld & Fabian Nicieza. The original DEADPOOL, with its blend of comic book action, snarky meta humor, bloody violence and quick-sparring romance was just about perfect. Ryan Reynolds topped things off with a joyously sarcastic performance as the title character, aka Wade Williams, who dons the mask after receiving burns all over his body in an incident that also makes him exceptionally hard to destroy.

For DEADPOOL 2, Reynolds is back in the lead, and has officially joined the original screenwriting team of Rhett Reese & Paul Wernick. David Leitch has taken over the directing reins from the first film’s Tim Miller. The results are mixed. All of the first film’s elements are here, but they’ve been calibrated a little differently, and the meta aspect threatens to swallow everything else, except that the plot is played straight. It’s as though the filmmakers don’t want us to look too closely at what’s actually going on, even as they seem to be nudging us repeatedly, asking if we’re buying this.

Without giving too much away, as the film opens, Deadpool is beside himself, figuratively and about-to-be literally. His by-the-book X-Man friend Colossus (voiced by Stefan Kapicic) gets Deadpool back on his feet, and the two of them try to find out what’s going on with Russell (Julian Dennison), a teen who calls himself Firefist and is majorly acting out. Another character, Cable (Josh Brolin), is determined to kill Russell for reasons we eventually learn, and Russell has issues of his own. 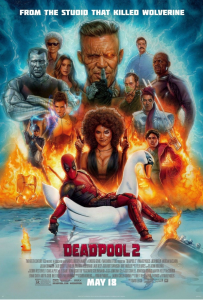 DEADPOOL was super-funny, super-gory, super-violent, and super-profane, but somehow it managed to choose its serious moments wisely, so that we could laugh and cringe and still feel invested. In DEADPOOL 2, there are only a couple of serious moments, which are undercut by the meta commentary. Then there are moments we’re meant to take seriously, which isn’t quite the same thing. They’re not funny, but they don’t fully land emotionally, so that instead of affecting us, they’re just moments without jokes.

It should immediately be said that most of the jokes are hysterical, with the best of them things you can’t possibly see coming (the mid-end credits sequence has a couple of zingers that are brilliant, although people should take note that there is no tag at the very end). Director Leitch comes from a stunt background and the action is admirably kinetic. A section focusing on Zazie Beetz as Domino, a woman who describes herself as having “luck,” is particularly funny and bracing.

Reynolds still displays crack timing and charm, Beetz is engaging, and Dennison is up to his multidimensional role. Brolin plays his taciturn death dealer with solid conviction.

If your idea of fun is clever wisecracks and inventive bloodshed, DEADPOOL 2 provides these in abundance. It’s just that when it’s over, it feels like less than the sum of its parts.