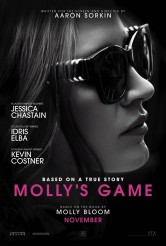 A witty look at an under-the-radar story 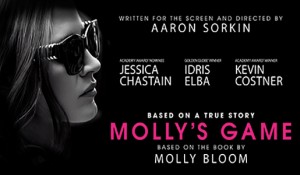 MOLLY’S GAME is the theatrical film directorial debut of Aaron Sorkin, who also wrote the screenplay, based on Molly Bloom’s autobiographical book. Sorkin created THE WEST WING and THE NEWSROOM, won an Oscar for his screenplay for THE SOCIAL NETWORK and is widely considered one of the best screenwriters working today. While it’s not all that he does, Sorkin has written a number of fact-based, somewhat biographical features – besides MOLLY’S GAME and THE SOCIAL NETWORK (about Facebook and Mark Zuckerberg), he also worked on STEVE JOBS, CHARLIE WILSON’S WAR and, most relevant to the current film, MONEYBALL.

MONEYBALL, for those who haven’t seen it, is about the Oakland A’s baseball team and its manager Billy Beane. It’s also a fascinating movie, whether one is a huge baseball fan or completely indifferent to the sport, because it gets so thoroughly into the human dynamics of who wants what and why that the game is simply the engine that causes the characters to move.

MOLLY’S GAME is similar in that the arena is high-stake poker, but that is not why we will or won’t become engrossed with its protagonist’s story. Molly, played as an adult by Jessica Chastain, introduces herself in voiceover. She is nowhere near a poker table at the time, but rather poised for a fateful Olympic-qualifying ski run under the watchful eye of her coach/father Larry (Kevin Costner).

Awhile later, Molly finds herself in Los Angeles and gets a job as an assistant to a would-be movie producer who is much more successful at getting high-profile high rollers together for a weekly poker game than he is at any creative endeavors. Crucially, he leaves the invitations, the scheduling and the bookkeeping to Molly. It’s not long before Molly figures correctly that both her wallet and her self-esteem would be better off if she ran her own game.

Molly herself doesn’t gamble, though both the expected and unexpected demands of her lifestyle take quite a toll. She also runs afoul of the law – not much of a spoiler, since much of MOLLY’S GAME is told in flashback as Molly confers with Charley Jaffey (Idris Elba), a lawyer she’s trying to talk into representing her.

It’s a testament to the skill of everyone involved that Elba’s principled Charley registers so powerfully as a character when he’s essentially part of a framing device. Sorkin keeps us guessing as to both how Molly got into the mess she’s in when we meet her, and whether (and how) she can get out of it. Complications are added when we find out what is at Molly’s core.

Chastain is ideal in the role, giving her just enough vulnerability to make us care about how things affect Molly, while conveying inarguable intelligence and determination. Elba, called upon to be the consummate good guy, does not disappoint in any way. Costner and his character Larry both offer surprises. Michael Cera and Chris O’Dowd both impress as two very different players and Graham Greene is great when he shows up late in the running.

MOLLY’S GAME shows us a world we may have seen before, but from a different perspective. This provides us with intriguing details and riffs, but the selling point here is that Sorkin has given both the story and its human center a coherent through-line, reasons to make us care, and of course his trademark heightened but ever-engaging dialogue.

Exclusive Interview: Summer Glau protects THE CAPE
Exclusive Interview: Mark Ruffalo talks THE NORMAL HEART
GRACEPOINT actress Jessica Lucas on the Fox series and the EVIL DEAD r...
WHAT WE DO IN THE SHADOWS: Natasia Demetriou vamps it up in Season 2 -...