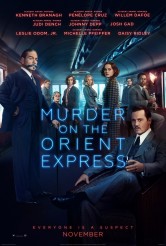 Entertaining, but missing a few pieces 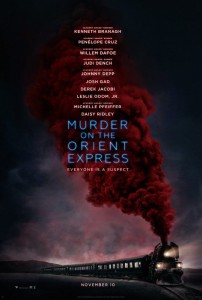 Agatha Christie’s durable mystery novel MURDER ON THE ORIENT EXPRESS has been adapted as a feature film in 1974, a telefilm in 2001, an episode of the series AGATHA CHRISTIE’S POIROT, and more. It’s also been unofficially adapted, ripped off and parodied so often that even someone who’s missed all the earlier versions will surely recognize the elements on hand here.

In brief, we have a famous detective, a trapped train, a murder and a bunch of suspects. In the new edition of MURDER ON THE ORIENT EXPRESS, it’s 1934. Belgian sleuth Hercule Poirot, played by Kenneth Branagh, who also directed here, quickly proves his mettle to us by solving a crime in Jerusalem. Then Poirot is summoned to England by his old friend Bouc (Tom Bateman). The two board the Orient Express in Istanbul, along with a disparate assortment of passengers. The more familiar people playing them include Daisy Ridley, Leslie Odom Jr., Penelope Cruz, Josh Gad, Johnny Depp, Derek Jacobi, Michelle Pfeiffer, Judi Dench, Olivia Colman and Willem Dafoe, though the lesser-known folks are likewise well-cast.

Soon enough, the title event happens. Then the train is blocked by an avalanche as it sits on a precarious-looking bridge over a deep crevasse. Poirot is prevailed upon to identify the killer before the authorities get involved.

This Poirot, as played and directed by Branagh and as scripted by adapter Michael Green, is a good deal warmer than how the character is generally depicted. Purists may be unhappy, but it certainly works in this one-off situation. His abruptness and idiosyncrasies are still present, but Branagh tunes these so that Poirot appears to be courteous according to his own lights, rather than imperiously rude. The change serves to heighten Poirot’s climactic moral crisis.

Green’s screenplay preserves the shape and most of the characters of Christie’s original. This MURDER ON THE ORIENT EXPRESS is a bit more action-oriented than its predecessors – they aren’t stuck over a giant gorge for nothing – and has some social urgency to it, as Bouc fears the authorities will reflexively pin the crime on one of the minority passengers (not a factor in earlier versions). All of this lands pleasingly and naturally.

However, there has been quite a lot of cutting, either in the scripting or editing stage (or both). We still get to see Poirot come to brilliant deductions, but a lot of the clues have been stripped away, so that we don’t get to detect alongside him. We also don’t get recaps of the hints we have been given, so viewers who miss these as they appear don’t get the usual “aha!” moment later. Even for those who already know what’s happening, this is a little disappointing.

As a filmmaker, Branagh employs a lot of overhead shots and views through beveled glass that give us opaque and/or multiple images of the characters. It’s stylish and thematically valid. He also gets sturdy work out of his large cast, and modulates them so they all seem to be part of the same story.

A bit more time spent on how Poirot figures out who someone’s father is or another character’s real first name would have been welcome. Still, MURDER ON THE ORIENT EXPRESS is a consistently entertaining whodunit, and Christie’s ending still holds up nearly a century after she first wrote it.