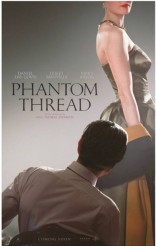 Lots of surprises, not so much engagement 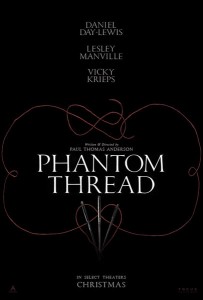 PHANTOM THREAD manages the difficult but not entirely laudable feat of being both unpredictable and staid. We can’t guess where this tale of an elite dressmaker and his smitten muse is going, but the thread doesn’t remain shiny all the way through.

Written and directed by Paul Thomas Anderson, PHANTOM THREAD is set in 1950s London. Everyone is still feeling the impact of WWII, but the wealthy and the royal still have the need for style. Reynolds Woodcock (Daniel Day-Lewis), dressmaker to the elite, has his own fashion house, where he designs and manufactures dazzling garments for his patronesses. Reynolds is creative, tasteful and precise. He is also oversensitive when it comes to his own needs, insensitive when it comes to others, finicky and leaves everything real-world to his sister/secretary/confidante Cyril (Lesley Manville). This includes sending away mistresses who no longer captivate him.

When Reynolds goes for an outing to his country abode, he meets waitress Alma (Vicky Krieps). She is young and lovely and, crucially, possesses perfect proportions to be a dress model. Reynolds is charming, Alma responds. Alma is disconcerted but doesn’t flee when she finds that Reynolds wants her as a combination inspiration/tailor’s dummy/model and that Cyril is always around. Alma joins Reynolds’ household, which fills up every day with seamstresses and servants. Alma shares in Reynolds’ triumphs and in his despairs. However, when she finds that she is not getting the kind of attention she wants and expects, she does something about it.

It’s hard to know exactly how to respond to PHANTOM THREAD. The production design by Mark Tildesley and the costume design by Mark Bridges are sumptuous – we don’t wonder that women from all over want gowns from the House of Woodcock. The sound design by Christopher Scarabosio deserves special mention – if you’ve never thought that the sound of toast being buttered could be a severe provocation, think again.

Krieps is splendid as Alma. She conveys spirit, curiosity, tenderness and steely fury with ease. As for Manville, she is so quietly commanding as Cyril that there are more than a few moments when we wish the film could change course and be about her character instead of the central couple. Day-Lewis gives an extremely detailed performance that is without vanity for the most part.

And here is where things get tricky. Because Reynolds is so fussy and oblivious to the feelings of others, he uses up our patience a lot quicker than he does Alma’s. We’re inclined to understand the first time she goes off the rails with him. After that, though, while it’s realistic enough that she doesn’t simply leave – real life is full of plenty of examples of people who stay for much worse than this – the dynamic gets old. There’s also a moment where Reynolds has a change in behavior that is so unlike what has come before that it’s hard to credit. Here we see Day-Lewis do something that is interesting and works on its own, but doesn’t seem part of what has come before.

By the end of PHANTOM THREAD, we feel a little like we’ve learned a lot about people who become less engaging as we get to know them better.