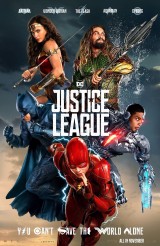 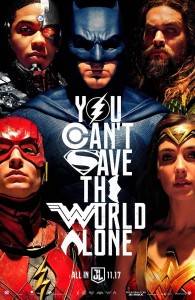 JUSTICE LEAGUE has been awaited with some skepticism. Part of this is due to the fact that a lot of people weren’t too wild about its direct predecessors, MAN OF STEEL, which brought forth Henry Cavill’s Superman/Clark Kent, and BATMAN V. SUPERMAN: DAWN OF JUSTICE, which had Superman squaring off against Ben Affeck’s Batman/Bruce Wayne. Yes, JUSTICE LEAGUE also has Gal Gadot’s Wonder Woman/Diana Prince, who won practically everybody over with WONDER WOMAN earlier this year. However, WONDER WOMAN was directed by Patty Jenkins, whereas JUSTICE LEAGUE is helmed by Zack Snyder, who was also the director of MAN OF STEEL and BATMAN V. SUPERMAN. Those other two films had very dark, ponderous tones that didn’t necessarily bode for much fun in their continuation.

Another cause for apprehension is that JUSTICE LEAGUE is intended as a launching pad for three – count ‘em – new DC Comics film franchises: Aquaman/Arthur Curry (Jason Momoa), the Flash/Barry Allen (Ezra Miller) and Cyborg/Victor Stone (Ray Fisher). That’s a lot to ask of a movie that’s got to have its own identity.

As for Affleck’s brooding Caped Crusader, he’s developed a wee bit of a sense of humor and a big sense of purpose, which drives the plot here. Since Superman’s Earth-saving self-sacrifice at the climax of BATMAN V. SUPERMAN, Batman/Bruce has come to believe it is his responsibility to save not just Gotham City, but all of humanity in the absence of its Kryptonian protector. With what appears to be an alien invasion occurring, Bruce enlists Diana in trying to recruit others rumored to have power.

Despite Arthur and Victor’s extreme reluctance, we know from the title (and from the poster, and from comics lore, and story logic, and so on) that they will eventually join the League. Barry’s instant enthusiasm is both amusing and welcome. Without getting too spoilery, there is another major character who is handled with a comparatively light touch.

JUSTICE LEAGUE has a lot of genuinely likable qualities. The screenplay by Chris Terrio and Joss Whedon, from a story by Terrio and Snyder, lets the characters realize the value in one another, and also makes a point of letting the mighty heroes care about civilians (their negligence in this area has been a sore point for many regarding MoS and BVS). There are plenty of grace notes, and a choice supporting turn from Jeremy Irons as Bruce Wayne’s extra-dry aide Alfred. J.K. Simmons, Amy Adams, Joe Morton and Connie Nielsen also show up to good effect.

The overall storyline gives all of the characters chances to show off their chops both physically and emotionally; the latter works better for some than others. The general narrative, about trying to keep destructive extraterrestrial Steppenwolf (Ciaran Hinds) from obtaining a trio of objects, doesn’t do anything new, but it works in terms of keeping the stakes high and the action moving.

Problems with the film include a less-than-well-defined villain who is also completely CGI (he’s humanoid, they could have just as easily let top actor Hinds use his own face) and overactive editing that makes it sometimes difficult to follow the moment-to-moment action.

There’s also what sometimes threatens to be a brood-off between Batman and Aquaman. One major gloomy protagonist is plenty for a story with this much exposition. There are glimmers of Bruce inferring from his own dealings with Arthur how tough it is to deal with him some of the time. Given that part of the film deals with Bruce/Batman coming to terms with what it means to be part of a team, and what it takes to make a team work, this thread might have been productive if it had gotten a little more attention. Cyborg is not exactly a ray of sunshine either, but Fisher plays him with more reserve than melancholy, and the character proves so useful so quickly that we’re inclined to give him a pass.

By all means, stay for the two post-credits scenes. One appealingly addresses a longtime fan debate, and the other sets up what we’re likely to see in future films.

JUSTICE LEAGUE isn’t a roaring success, but it’s consistently watchable, playing to its strengths with Wonder Woman and the Flash, and rehabilitating some faux pas of the past.