The actress goes on a galaxy quest with Seth MacFarlane 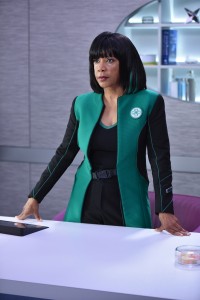 In Fox Network’s new Thursday-night series THE ORVILLE, which has already been picked up for a second season, we’re on the title spaceship in the future. Captained by Ed Mercer – played by series creator Seth MacFarlane – the Orville is commissioned as a fairly ordinary transport ship, but the galaxy being what it is, there are a lot of adventures.

Some of the Orville’s crew are humans and some are aliens. The ship’s chief physician, human Dr. Claire Finn, is extremely capable of treating them all. Claire is played by Penny Johnson Jerald, who has experience playing people in charge (NYPD precinct captain Victoria Gates on multiple years of CASTLE), playing a medic (Nurse Practitioner Lynette Evans on E.R.) and even playing a captain in an outer space franchise (Kassidy Yates on STAR TREK: DEEP SPACE NINE). Jerald is also known for her villainous turn as U.S. First Lady Sherry Palmer in three seasons of 24.

We caught up with Jerald for a chat about her new mission aboard THE ORVILLE.

PENNY JOHNSON JERALD: On THE ORVILLE, I am the doctor. I think I have the coolest props out of everyone, because they create them and they give me a tutorial on them, and then I’m part of when I get something new for the first time, trying to decide how I’m going to use that. Seth is really good at particulars. He’s very precise in that, and so I have the best gadgets ever. I’m not only the medical doctor, I’m the head doctor, too, so I can get inside the psyche of all the characters.

ASSIGNMENT X: Would you say THE ORVILLE is more of a true ensemble than CASTLE was?

JERALD: CASTLE was an ensemble in the way we grouped together off-camera. But on the page, no. You had Stana [Katic as homicide detective Kate Beckett], and you had Nathan [Fillion as title character Richard Castle], and then you had the dynamic duo [Jon Huertas as Javier Esposito and Seamus Dever as Kevin Ryan], and then the rest of us converging on it. This I must say is truly a company of actors, and it is an ensemble, because it will highlight and feature many of us in different episodes. We all can talk about our specific episode or episodes, and Seth is very generous in allowing us to have that opportunity and to let us shine.

What’s special about playing [Claire] is that I’m a part of a cast that, I kid you not, we for real love on one another. For real. We keep each other in check and I think we’re in for a long period of time where we’re going to have to spend a lot of time together, and continuing that.

AX: Your doctor’s costume is largely green, and you have a green streak in your hair and green fingernails. Whose idea was it for your hair to be dyed to match your outfit?

JERALD: [laughs] Now, you know the answer to that. I’m into specifics. I’m thinking franchise. I’m thinking dolls, I’m thinking green in the hair, green on the nails. Just make sure you know when you look at green, you’re thinking of Dr. Claire Finn.

JERALD: That it’s not STAR TREK, and that it’s something that STAR TREK fans will definitely appreciate because of that.