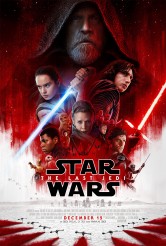 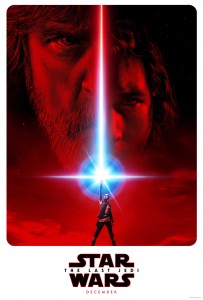 By now, it is evident that any kind of adaptation of pre-existing material – sequels, books into films, films into TV series, and so on – is going to get a very strong reaction from people who have strong sentiments about the original. This means that often these adaptations are judged on the basis of how well or poorly they uphold what people liked about the earlier version. For some, it’s like an interpretation of a religious text. This is true of just about everything (look far enough and you’ll find at least one person who takes some story extremely seriously), but the reactions are more visible and audible and numerous with material like STAR WARS.

The trouble is, without knowing what any particular viewer loved or hated about STAR WARS to begin with, it’s impossible to say whether STAR WARS: THE LAST JEDI is going to delight or infuriate. Directed and written by Rian Johnson, this eighth entry in the STAR WARS direct chronology (there are more if you count last year’s ROGUE ONE and the animated additions) looks and sounds like STAR WARS. It has battles in deep space, it has robots and lightsabers and cool alien creatures, it has characters who represent good and evil.

STAR WARS: THE LAST JEDI has a few more shades of gray than we may remember from the original, which is in keeping with current storytelling. It also cannot possibly have the impact of the original STAR WARS, because there have been so very many films and television series and books and operas and you name it between 1977 and now with those same assets. For people heavily invested in the original characters, and those characters introduced in 2016’s STAR WARS: THE FORCE AWAKENS, STAR WARS: THE LAST JEDI will either gratify or disappoint hopes regarding the continuation of the saga.

At the same time, STAR WARS: THE LAST JEDI does depend on familiarity to some extent. It relies on us coming in wanting to know more about these people, as it would rather spend its time delving deeper into what’s happening than have to do a lot of set-up. We have to care enough to want to know what’s going to happen next and accept the conventions of this specific universe, while at the same time, not caring so much about particular interpretations and outcomes that a deviation will ruin the whole movie for us.

In short, it may help to be somewhat STAR WARS agnostic. For people who are allergic to adventures set at any time in other galaxies, THE LAST JEDI has nothing in it that will reinvent that wheel. For people who like this kind of thing, or at least are open to it, STAR WARS: THE LAST JEDI is a perfectly good movie. It is well-made, well-paced, looks good and, with one significant exception, well-cast. It also has a timeliness that may have been unintentional. Where once the STAR WARS talk of fascism and rebellion seemed to be all generalities, events in the real world currently make the entire enterprise seem very pointed.

Given the ending of THE FORCE AWAKENS, it shouldn’t be too spoilery to state that part of THE LAST JEDI involves what happens when Rey (Daisy Ridley), who has found she is strong in the ways of the Force, makes her way to now hermit-like Jedi master Luke Skywalker (Mark Hamill).

There are some side quests as heroes clash over the best thing to do and others try to find outside solutions. All of these wind up serving the overall story arc, though not always in the way that seems intended at first.

Hamill and Fisher both have a great deal to do here, giving their side of things an air of well-earned maturity and grounding. Ridley is ardent, Boyega and Isaac are both dashing in different ways and Kelly Marie Tran makes a strong impression as a dedicated Rebel mechanic. There are a number of surprising and welcome guest turns. John Williams once again contributes the musical score, which remains one of STAR WARS’ most essential components.

The one issue (again, all things being equal, some people may find the performance mesmerizing) is Driver as one of the most dangerous beings in the galaxy. He conveys inner conflict well enough, but the way he portrays ambition is at odds with the acting styles of those around him.

This aside, STAR WARS: THE LAST JEDI works. It’s macro and micro stories entertain, either if you’re predisposed to like what it has to offer, or at least not actively resistant to it. And for a lot of viewers, its message of hope will be welcome at the end of a very tough year.