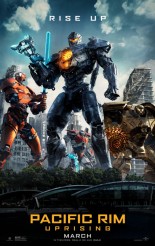 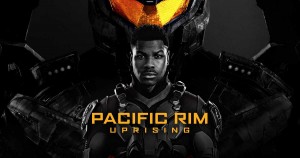 PACIFIC RIM: UPRISING is the sequel to 2013’s PACIFIC RIM, which was directed by Guillermo Del Toro. The new film is directed by Steven S. DeKnight. Someone else said one difference between the two is that the first film was a monster movie with giant robots, where PACIFIC RIM: UPRISING is more a giant robot movie with monsters. That’s a little reductive, but it’s fair. The sequel is also aimed at a younger audience. Besides the inclusion of a lot of teen characters, there’s more declarative dialogue and a generally sunnier attitude. This last actually makes sense, as the characters haven’t been coping with an apocalypse for years at the time the story starts.

PACIFIC RIM: UPRISING is set ten years after the end of the original PACIFIC RIM, when the giant robots known as Jaegers, so big that they required two pilots to operate them from within, conclusively defeated the enormous monsters called Kaiju, which burst through a dimensional rift to attack our world.

With no more Kaiju to fight, Jaegers are now used for law enforcement. However, something sinister is afoot, and – we see Kaiju in the trailers, it can’t be too spoilery to say that they eventually show up to wreak more havoc.

Our main characters are Jake Pentecost (John Boyega) and Amara Namani (Cailee Spaeny). Jake is a once-promising Jaeger pilot and son of war hero Stacker Pentecost (played in the first film by Idris Elba) who washed out and is reluctantly dragged back into the program by his foster sister Mako Mori (Rinko Kikuchi, reprising her original role). Amara is a scrappy adolescent orphan who has built her own (albeit smallish) Jaeger out of spare parts and who is only too happy to be admitted to the Jaeger Academy as a cadet after she’s arrested with Jake.

No surprise that both Jake and Amara learn the value of team spirit and bonding. To the credit of the screenplay by director DeKnight & Emily Carmichael & Kira Snyder and T.S. Nowlin, based on characters created by Travis Beacham, there are a couple of genuine plot twists. (There’s brilliant use of Foreigner’s “I Wanna Know What Love Is” that may forever color viewers’ reaction to the song.) Charlie Day and Burn Gorman are both back as the original PACIFIC RIM’s squabbling scientists, livening things up and enforcing necessary story points.

One major physical difference between the earlier movie and PACIFIC RIM: UPRISING is that the new film is literally sunnier. Where PACIFIC RIM played out under cover of clouds, slashing rain and near-permanent darkness, the skies are clear here. This means both that the generally strong CGI displays its weaknesses at times, and that the mood of dread is less prevalent. This goes along with having nervous but hopeful adolescents rather than battle-hardened adults as the leads. Yes, Jake and fellow pilot Nate Lambert (Scott Eastwood) are in their twenties, but even they haven’t been traumatized like the warriors in the first film. They are worried but essentially upbeat. Because we don’t get as much Kaiju as before, there’s also a bit more oohing and aahing over the Jaegers than may be comfortable for adult audience members.

Boyega has a lot of charm and presence, which he deploys very much in the spirit of Elba (appropriate, since they’re meant to be son and father). Spaeny is credible as the largely wide-eyed Amara and Tian Jing is notable as an impatient businesswoman.

PACIFIC RIM: UPRISING skews lighter and younger than its parent, but most people who liked the first film will like this one, as will kids who like giant robots, giant monsters and the two kicking the heck out of each other.