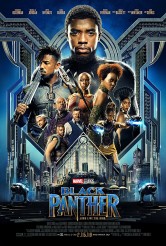 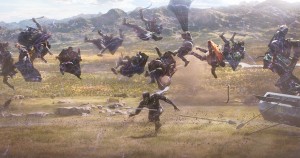 BLACK PANTHER is a study in how to use comic-based material to do something that is both very entertaining and very heady. In fact, BLACK PANTHER is arguably as entertaining as it is precisely because it talks about recognizably real issues, even if it’s using science-fiction tech and a fictional country to do so.

BLACK PANTHER is based on the Marvel Comics character created by Stan Lee and Jack Kirby in the 1960s. The comic title and its world have had various runs since then. The film, written by its director Ryan Coogler & Joe Robert Cole, reportedly drew particular inspirations from BLACK PANTHER comics arcs created by Christopher Priest and by Ta-hanisi Coates.

As viewers of the Marvel Cinematic Universe know, King T’Chaka (John Kani) of the African kingdom Wakanda was assassinated during the events of CAPTAIN AMERICA: CIVIL WAR. T’Chaka’s son and heir Prince T’Challa (Chadwick Boseman), having worked with the Avengers during the earlier film, now returns to Wakanda for his coronation as the new king. Thousands of years ago, Wakanda was hit by a meteor full of vibranium. Vibranium is an extraordinarily powerful substance. The Wakandans have harnessed vibranium to create the most technologically advanced civilization on Earth, but they’ve disguised this fact successfully. From the air, Wakanda looks like a country full of working farms. Only those in the know, almost all of them native Wakandans, know that Wakandan cities boast buildings that are towering spires, rapid-transit rail, hoverbikes and much more. The outside world knows only that Wakanda has not been colonized. T’Challa has also taken on the mantle of Black Panther, Wakanda’s historic protector, who has super-powers derived from something innately Wakandan and amplified by a super-suit.

An action-packed story follows, full of vivid, passionate characters and a wide range of moral positions. Some of what BLACK PANTHER discusses is specifically relevant to the African-American/Afro-Euro experience; other aspects of what the film deals with are more broadly about how a civilization of “haves” feel about the benefits and dangers and ethics of interacting with “have-nots.” The skill of the filmmakers is that they don’t have to mention either race or any real-world countries for us to comprehend exactly what’s being considered here and what’s motivating the people, no matter what side they’re on.

Refreshingly for women, there’s no discussion of sexism, at least in Wakanda, because it’s all over. T’Challa is perfectly comfortable with his bodyguard and primary army being the all-female corps of the Dora Milaje, headed up by the imposingly fierce General Okuye (Danai Gurira of THE WALKING DEAD fame). Likewise, no one in Wakanda bats an eye at the fact that their current most advanced scientific mind is T’Challa’s younger sister Shuri (the ebullient Letitia Wright). T’Challa isn’t even especially worried about the ability of his love Nakia (the ardent Lupita Nyong’o) to defend herself, but rather that her crusading altruism will carry her too far away from him.

Boseman has long since proved that he can carry a film, and he’s everything that both BLACK PANTHER the movie and Black Panther the character need and want – dignity, presence, charisma and intellectual credibility. Michael B. Jordan as T’Challa’s principal adversary provides a worthy balance, brimming with such pain and surety that we feel for him even though we want T’Challa to prevail. Other luminaries in the cast include Angela Bassett, the personification of royalty as T’Challa’s queen mother, Sterling K. Brown, GET OUT Oscar nominee Daniel Kaluuya and, in a rare non-motion-capture performance, Andy Serkis.

Coogler directs the action sequences to get maximum thrills, and makes striking use of color at every opportunity. Special mention should be given to costume designer Ruth Carter, who does dazzling work with each character.

BLACK PANTHER is a terrific movie, able to discuss profound topics with ease and accessibility. Coogler and Company have created people and a world that many viewers will want to return to again and again. As most of the characters say, Wakanda forever!