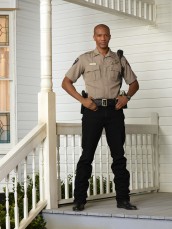 The actor also discusses ANGEL and writing/directing on GIANTS 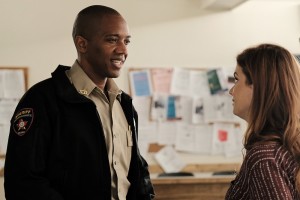 In ABC’s freshman Tuesday-night dramedy KEVIN (PROBABLY) SAVES THE WORLD, Kevin (Jason Ritter) is a former financial whiz who returns to his hometown to live with his twin sister Amy (JoAnna Garcia Swisher) and her daughter Reese (Chloe East) after his life implodes. Kevin is startled to discover that he is tasked by a Heaven-sent entity (Kimberly Hebert Gregory) with actually saving the world, essentially by helping other people in small but crucial ways.

J. August Richards plays local sheriff’s deputy Nate Purcell, who is sweet on Amy and baffled by Kevin. Richards, originally from Washington, D.C., has some supernatural series in his past, costarring as demon-fighting Charles Gunn on five seasons of ANGEL and more recently recurring as Mike Peterson/Deathlok on AGENTS OF SHIELD. He’s also played a lot of lawyers, with series regular gigs on CONVICTION, RAISING THE BAR and NOTORIOUS. Richards has also expanded into writing and directing, with THE HYPNOTIST and Season 2 of GIANTS.

ASSIGNMENT X: What does Nate think of Kevin’s odd-seeming behavior? Is Nate at all aware of Kevin’s quest?

J. AUGUST RICHARDS: He’s not aware of the quest specifically, but he’s always defending Kevin. I think Nate really likes Kevin, just like J. likes Jason. I think he’s charmed by him, I think he thinks he’s funny, and I think that Nate can see that he’s well-meaning.

AX: How is Nate’s courtship of Amy going? She started out seeming unaware of his interest …

RICHARDS: Well, as I like to call the show, “Nate (Probably) Gets the Girl.” It’s going well. On [one] episode, Amy attempted to ask me out on a date, but it was thwarted by Kevin kicking her in the head with a roller blade. So we are sort of star-crossed lovers. But I think everyone will know which way the relationship is going.

AX: What is going on with your Web series?

RICHARDS: Oh, that’s going great. That’s called GIANTS, and it premiered in February on the Issa Rae YouTube channel. I directed the first two episodes, I wrote the fifth and the sixth, and I act in the sixth episode as well. It’s a fantastic show, I’m so honored to be a part of it. It’s created by this really talented young guy called James Bland, and it’s really great to be sort of the older, experienced guy on the project. It’s just been an amazing experience.

James is telling his story and the stories of other black millennials so truthfully that I couldn’t help but get involved. He wrote and directed most of, if not all, the episodes of Season 1. The show was such a success he was able to expand to having a writing staff of four, one of which is me, and a team of directors. I directed two episodes. As an actor, you don’t have a lot of power in deciding what stories are being chosen to be told. I am moving into a phase of my career where I’d like more choice in deciding what stories I am a part of telling. It’s really important to me at this point in my life to tell my story and support people who don’t usually get the opportunity to tell their stories truthfully.

RICHARDS: I know that we’re moving forward, because actually working on GIANTS and watching the work of Issa Rae and Donald Glover, what I love right now is, I feel like artists of color are creating the content, and I think a lot of times, we don’t create our own characters, we don’t speak for ourselves in that way, so that’s really where I’m hoping to go next in my career. I would really like to be a part of creating other spaces for African-American and Latino and Afro-Latino characters, too, come from an honest cultural place.

AX: Do you have any input into Nate?

RICHARDS: No. And I like it that way. I think acting is a very specific job. Acting is an interpretive art. And when I’m acting, I don’t like to be involved in that aspect. I like them to create the world that they want to create, and then I interpret it.

AX: Do you have any thoughts about the eighteenth anniversary of ANGEL?

AX: And what would you most like people to know about KEVIN (PROBABLY) SAVES THE WORLD?

RICHARDS: That it’s inspiring at a time when we need it.