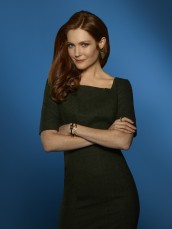 SCANDAL: The cast gives the scoop on the final season 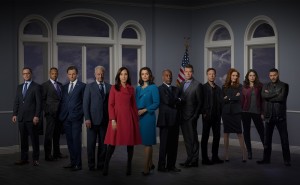 In its seventh and final season, ABC’s Thursday-night Shonda Rhimes creation SCANDAL crosses over with ABC’s HOW TO GET AWAY WITH MURDER, which Rhimes executive-produces. Specifically, HOW TO GET AWAY WITH MURDER’s lawyer Annaliese Keating, played by Emmy winner Viola Davis guests on SCANDAL opposite the latter series’ leading lady, the Emmy-nominated Kerry Washington, who plays D.C. political fixer Olivia Pope.

Most of the SCANDAL characters have plenty of other things to worry about, but the cast is keenly aware of and excited about Davis’ visit. Actors Guillermo Diaz (Huck), George Newbern (Charlie) and Darby Stanchfield (Abby) discuss this, how they feel about SCANDAL coming to an end and much more on the set of their characters’ joint workplace, the offices of QPA.

ASSIGNMENT X: Are you looking forward to the crossover with HOW TO GET AWAY WITH MURDER?

DIAZ: The table read was sick, it was so good. Having Viola Davis, the power that was in that room, hearing Viola Davis and Kerry Washington read opposite each other was memorizing each other.

AX: You’ve all been with SCANDAL for years now. Does it still feel special, or does it feel like work?

DIAZ: It isn’t for me. We’ve talked about this a lot, how rare this job is, and every day, I just want to lick the satin [that is part of the set], just touch it [laughs] –

STANCHFIELD: Thank God the other day we actually had a scene with a lollipop –

NEWBERN: I did, there was some licking candy. No, it’s bittersweet in the sense that actors don’t work consistently on one thing for so long, and I like when people are employed. What a lovely idea, to go to a job for seven years. I really get that. Bittersweet in that sense, great people and great material. You just can’t beat that.

STANCHFIELD: Like you guys, I haven’t been on a seven-season ride with any character. So this is new to me, I don’t really know what to expect. I can only anticipate, like you say, saying goodbye to the character, saying goodbye to the cast. I mean, I have a general rule of thumb in this business of not saying “goodbye” to anybody, but just saying, “See you next time,” or “See you later,” I think simply as a self-preservation tool [laughs].

STANCHFIELD: There’s this thing of, I know we’re not going to see each other every day at five in the morning for fourteen hours a day next year, but we have become very close and are friends. I don’t think there’s anything that I’ve experienced that is like this.

AX: What has surprised you most about your characters over the run of the show? Because it feels like everybody on SCANDAL has gone through some whiplash turns.

STANCHFIELD: I was actually very pleasantly surprised by, Abby had a really dramatic arc in terms of when Abby left the OPA and became press secretary at the White House, and then had to gingerly find her way into the bubble at the White House, and then get the president’s ear, and then as she became chief of staff for a season-and-a-half, and then grappled with power, that dramatic of an arc. I was not expecting that. I was just expecting that Abby would be more a detective, an investigator, sort of dysfunctional, and she wouldn’t grow as much and be challenged as much and evolve as a character as much. So I’d say the overall arc was quite surprising, and such an honor.

NEWBERN: I think it’s surprising that the writers have really given us three-dimensional storylines, backed with a lot of good back story, and character quirks and traits and things that you can do in a seven-year show. So the surprise was the depth to which the writers delved.

DIAZ: What surprised me the most was that Huck was the wedding planner for Charlie and Quinn’s [Katie Lowes] wedding. [laughs] I was like, “What?” I’m running around, telling people where to put the macaroons and telling David he had a speech to memorize. So that was very surprising.

AX: What do you hope SCANDAL’s legacy will be?

NEWBERN: Well, we spoke a little bit about it earlier, just that on so many levels, it will be an iconic show, because of Kerry, first of all, and second of all, it sort of ushered in this television style, a dramatic style that Shonda has been working on for awhile, and I feel like it culminated in this show in many ways, hitting all the different pistons of political and sexy and almost farcical and then soap elements, and then serious, that indeed it did ultimately become less interesting than Washington. [laughs] I mean, who could have ever guessed? But I think it will be known for Shonda’s great work, and Kerry, and I think the world that we got to be part of.

STANCHFIELD: Yeah. And I think also a really titillating, pop culture experience at a certain moment in time that includes social media and was one of the backbone elements of the TGIT [Thank God It’s Thursday] for ABC. It was not only a TV show, but very much like George said, with Kerry being the lead, African-American female, and it being so wildly successful, and then the social media element, it just had a really special moment in time in terms of the style of the show, and the content, too, I think, where it landed where we were politically was interesting.

AX: The show always had that black hat/white hat dichotomy, to put it in SCANDAL terminology, and each one of your characters at different times has been kind of a black hat, almost a villain at times. Is it more fun to play a black hat or a nobler version of the character?

NEWBERN: I think I’ve had a gray hat the whole time, so that’s been a blast. It has been black, but I’ve spent my career playing the good guy, the nice guy, the dad, the husband, so to get to play this part, and have him be not one way or the other, has been a dream come true for me.

STANCHFIELD: I love it – you torture people, and you’re a super-professional spy/killer, and you call that gray area [laughs].

NEWBERN: No, I just mean stylistically. I get to be funny and have a little bit of a life.

DIAZ: I love wearing the black hat, if you will. For me, it’s more exciting. It challenges me. In the first three seasons, I think, Huck was in that dark, dark place of not wanting to torture people, but then craving it and wanting to do it so badly. It was just fun, it was just fun to play. I got off on it and I really enjoyed it, so there you go [laughs].

STANCHFIELD: I feel like Abby, as a whole, has been easier for me to center on a moral compass, because I feel like that’s where she started off from. When Abby did have a couple of power struggles, whether it was with Olivia Pope and sneaking around behind her back early on, I’m trying to think, she was working with David Rosen, in Season 3, there were a couple of moments where they were maybe not exactly on the same side, but especially Abby’s moment when she’s in the White House and she feels like she can really grab at the gold ring and get the power. Those moments were actually very challenging to play, only because she has such a judgy sense of black and white, and this is right and this is wrong. And she came from such an abusive past, yet there was this clear idea of how things go. But nevertheless, it’s really fun to play, delicious. But a struggle. And that’s what’s so great. It’s not a show that’s been boring.

AX: Do you think the character of Olivia Pope can be redeemed at this point? She seems on a dark trajectory right now …

NEWBERN: I think it’s possible. I think she could be redeemed, for sure. But I couldn’t say she is.

AX: Do you hope it ends on the white hat note, or that we learn a lesson about a moral compass gone askew?

DIAZ: I hope it’s a combination of both.

NEWBERN: There’s no way for her [Olivia] to ever have a happy ending on this show, right?

STANCHFIELD: I do know the moments of, say, forgiveness between the characters, to me, in the show, especially the darker that it goes, those little moments of forgiveness or understanding or compassion are still very relatable and touching. My question is, is anyone beyond being forgiven? It’s a great question in general about humanity. But I do know the more messed up these characters are, the more powerful, if they can find a moment to connect, it seems. But there’s this judgy side of me that’s very much like, “They don’t deserve a happy ending!” [laughs]

AX: Over time, your characters have become less united. Do you think they’ll become more united as SCANDAL moves towards its conclusion?

DIAZ: In the last few episodes, I think I can say this, it feels like we’ve been more united than ever before. Even for myself and Abby, Darby’s character, I feel have had a lot more grown-up scenes, if you will, where they have a connection. And Katie Lowes’ Quinn being the head of QPA, I feel like we’ve always been super-united in the last few episodes. But who knows? Who knows if it’ll stay that way? I don’t know if there’s going to be a break in that somehow, or a glitch in that relationship, but we’ll find out.

AX: SCANDAL has always been a show about female empowerment, and while you’re certainly important in it, how has it felt to be on a show that’s led by women, both in the cast and in the production?

DIAZ: It feels like it’s about time. The latter was boring, I think. After awhile, it was like, really? Another lead, white tough dude? So it’s refreshing.