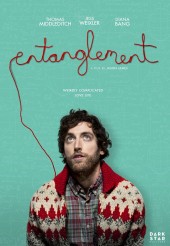 An indie romcom with a twist

ENTANGLEMENT starts out as one of those low-budget movies with a few name actors that centers around a middle-class, unemployed white guy going through age-thirty-life crisis. There’s nothing inherently wrong with this ever-growing genre, but it takes some ingenuity to stand out in it. ENTANGLEMENT becomes a kind of rom-com, then something else, with a plot twist at the two-thirds mark, but it doesn’t stray far from that initial sensibility. The movie is well-made for its budget, with a couple of nicely-executed special effects, but it never weaves the kind of web that ensnares our emotions or even great curiosity.

Ben Layten (Thomas Middleditch) is newly divorced and deeply depressed. After a failed suicide attempt, Ben learns from his mother Betty (Marilyn Norry) that his parents had just adopted a adopted a baby girl when they discovered Betty was pregnant with Ben. Betty says this meant they legally had to give the baby back (it’s not clear if she’s lying or if we’re supposed to buy this nonsensical rule). If only they’d adopted just a little sooner, or had the pregnancy just a bit later …

Ben becomes obsessed with the idea that having a sister would have made all the difference in his life. He enlists the help of his friend Tabby (Diana Bang) to find the now-grown almost-sibling. Before Ben can spend a lot of time looking for his briefly-adopted sister, she turns out to be Hanna (Jess Weixler). Hanna has been stalking Ben since they encountered each other in a drugstore. Hanna is gorgeous and free-spirited, so Ben doesn’t ponder why she’s so keenly interested in him, even before he reveals their missed-connection bond.

A mild spoiler: ENTANGLEMENT does not turn into a horror movie. The aforementioned plot twist takes Ben’s thick-headedness into consideration, but not in a way that makes us feel as though we’ve learned something about him or ourselves. Middleditch is an appealing performer, but there’s only so much an actor can do when a character is written like Ben. Writer Jason Filiatraut and director Jason James don’t seem to realize that their protagonist is appallingly self-absorbed. Even when Ben falls in love with Jess, he doesn’t exhibit the kind of fascination with her that most people associate with romance. In Ben’s defense, Hanna is written as a fantasy girlfriend – ENTANGLEMENT doesn’t seem to know how to enact Ben’s brother/sister ideal, even for a scene – with practically no depth. Weixler is lovely and spirited, but again, the structure doesn’t provide layers for her to play. The loyal Tabby doesn’t fare much better, though Bang manages to elicit some sympathy for her.

One of ENTANGLEMENT’s issues is that all of the main characters engage in some form of stalking – with no harmful intent, but still without any sense of boundaries. The filmmakers seem to find this more charming than most viewers likely will.

What’s really annoying about ENTANGLEMENT, though, is that it teases exploring the interconnection of all things, but can do no better than coincidence. That’s not quantum entanglement, that’s flat storytelling.