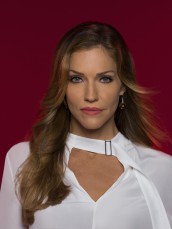 The actress talks about playing the Goddess and Charlotte 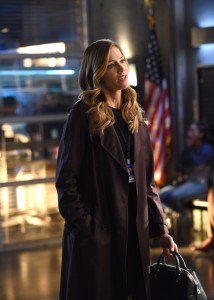 In the previous season of LUCIFER, on Fox Network Monday nights, Lucifer’s Mom escaped from where she’d been held prisoner in Hell. Mom, a celestial being, took over the body of recently-deceased defense lawyer Charlotte, played by Tricia Helfer. Charlotte loves her sons, including fallen angel Lucifer (Tom Ellis) and regular angel Amenadiel (D.B. Woodside). Even though she mostly despised humans, she had an affair with extremely bewildered LAPD Detective Daniel Espinosa (Kevin Alejandro), the ex-husband of Lucifer’s detecting partner Chloe (Lauren German).

At the end of Season 2, Mom left Earth to Create her own universe (she has that much power). In Season 3, an extremely confused Charlotte comes back to life. While she doesn’t know about hosting Mom, Charlotte eventually realizes that she died, went to Hell and is now determined to be a better person so that she’s not sent back there.

Helfer, who played the similarly complex Number Six in Syfy’s BATTLESTAR: GALACTICA series, talks about playing both Charlotte and a Supreme Goddess.

ASSIGNMENT X: It seems like originally when the Mom character went away to invent her own new Creation, you as an actor were gone from LUCIFER. Did you have a long conversation with the producers about coming back and how you would come back?

TRICIA HELFER: I actually knew early on in the [second] season that I was coming back. I wasn’t quite sure how, but I knew two episodes in that I was actually going to come back the following season if we got the pick-up. So where it goes from here, we don’t know, but it’s been fun, even though Charlotte’s not integral to the story in the long-term, what happened to her I think is interesting. The Goddess of Creation doesn’t take over too many humans, so it’s kind of fun to see the fallout from that.

AX: Which version of Charlotte have you enjoyed playing more, Mom or Charlotte-Charlotte?

HELFER: Oh, that’s a hard one. Mom was just so much fun and deliciousness to play. I really enjoyed the first couple of episodes of Charlotte back, and I’m enjoying her struggle, but kind of in the middle, she just sort of floats for awhile, because she thinks she has things under control, so as an actor, that’s less interesting to play, but it’s ramping up towards the end of the season. The next run of seven episodes, for me, it’s going to ramp up again. So it’s like she’s on an identity journey, and your peaks and valleys are interesting as an actor to play. The plateau isn’t so much, but the bomb’s about to drop. So it’s going to be really fun for me finishing up the season.

AX: Can you contrast playing Mom on LUCIFER with playing Number 6? I don’t think the real Charlotte has that much in common with Number 6 …

HELFER: No. I think the difference between Mom and Number Six was, Mom’s whole purpose was her love for her kids – I know a lot of the audience thought she was manipulative, but it came from a basis of love and wanting what was taken from her, revenge on her ex-husband [God], and wanting to see her children. With Number Six, she was more programmed and more indoctrinated into what her side, the Cylon side, thought was right. And it was only her interactions with humans, and depending on the interaction – if they were harsh or enjoyable – it started skewing that individual Six’s viewpoint. With Mom, she hated humanity. That was one of the most fun points for me, the fact that she hated humanity and was stuck in a human form, but then throughout the season started to understand there’s some benefits to this, and there’s some enjoyment. So it was kind of a learning process for her, but while she was still the Goddess of All Creation and could be grandiose.

AX: Did you think at any point that Mom might come back, maybe because she’s having divine writer’s block with her new Creation?

AX: Do you have any questions about how LUCIFER the show depicts the criminal justice system? It seems to frown on defense attorneys knowingly defending guilty clients, even though that is the basis of our legal system.

HELFER: Well, you know, Charlotte was a high-powered criminal defense attorney who has basically discovered she went to Hell because of her job, even though she’s not inherently bad. So maybe that has something to say with morality and doing your job above everything else. I personally am not a religious person, so I just look at it from an acting perspective, but the criminal justice system does certainly take a bit of a hit in the show, yes.

AX: Kevin Alejandro is going to be directing the LUCIFER season finale. Are you looking forward to that, or is it disconcerting when the actor is sort of jumping behind the camera, in front of the camera?

HELFER: Not at all, because Kevin is incredibly talented as a [filmmaker]. He has a short film in the festival circuit this year, he got into some festivals, it’s called BEDTIME STORY, and I played one of the characters in it. So I’ve already worked with him as an actor, and he also shadowed directors last year and this year. And he’s got an incredible eye, and he’s one of the loveliest human beings I’ve met, and I think he’s going to do incredible things as a director, so I’m looking forward to it. Again, I worked with him on a short film, separate from LUCIFER, and I really enjoyed working with him, so actually working with him on the LUCIFER set I think is going to be really fun, because we already know, we already have that shorthand as the characters, right? So I’m really looking forward to it, and I think he’s got a huge directing career ahead of him. 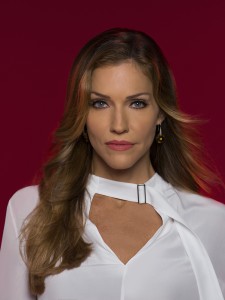 HELFER: I do. I’m producing a show called HEARTSICK, based on a series [of novels] by Chelsea Cain, international bestseller, six books, two on the way. I’ve been working behind the scenes for about two years, and it looks like we might finally be about to look for show runners. So it looks like it’s finally on the fast track.

AX: And what would you most like people to know about LUCIFER the show?

HELFER: LUCIFER the show has a particular tone that gets it right. Some of the episodes are a little lighter, some of the episodes are a little darker, but it’s based on a graphic novel/comic book, and it’s a fun show. You can watch it, get some interesting insight into the look of your own family, but from a celestial aspect, and it’s just fun to watch.