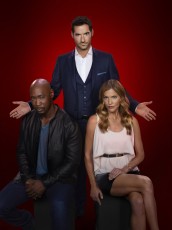 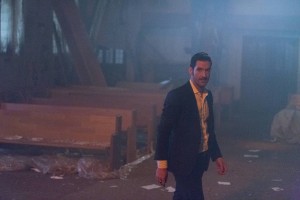 In Fox Network’s LUCIFER, now in its second season Mondays at 9 PM, Tom Ellis plays the title character. Lucifer Morningstar is literally the Devil, but he’s on an extended vacation as owner of the swanky nightclub Lux in Los Angeles and doesn’t want to go back to running Hell. However, Lucifer has fallen for human police detective Chloe Decker (Lauren German) and, at the end of Season 1, made a deal with Dad, aka God, that he’d do what he was asked for if God would spare Chloe’s life.

This gives Lucifer, and his brother the angel Amenadiel (D.B. Woodside), quite a problem. God has asked the boys to recapture their Mom, currently residing in a human body known as Charlotte (Tricia Helfer) – and Mom is quite a powerful being herself.

LUCIFER executive producers Joe Henderson and Ildy Modrovich are the Season 2 show runners. They sit down at a party thrown by Fox for the Television Critics Association to talk about the show that Tom Kapinos adapted from the comic book series by Mike Dringenberg and Sam Kieth, which itself is a spinoff of Neil Gaiman’s SANDMAN graphic novels.

ASSIGNMENT X: Now that Lucifer has promised God that he’ll do God’s work, how is that going to affect Lucifer’s routine, as it were?

JOE HENDERSON: Well, I think what’s so interesting about the end of Season 1 is, Lucifer has never really handed out a blank check. And he ended up having to hand out a blank check to the person he wants to the least. And so of course that comes back to haunt him in the form of Dad asking him to do something he doesn’t want to do. One, because Mom actually, genuinely scares him, and Two, because of the history they have. So the big part of that is, for one, Lucifer realizing that he backed himself into a corner because of his moment of emotional vulnerability, but two, owing his Father something. Now, the thing is, Lucifer is the Devil, he is the ultimate man to sign a contract with. So the question is, how does Lucifer try to get out of it or adapt it to his own needs, if it comes to that impasse?

AX: How does this affect LUCIFER the show on a weekly basis, as far as Lucifer’s adventures with Chloe?

HENDERSON: The show is still very much Lucifer and Chloe investigating cases and all of that. That is still the spine of the show. But what this gives us when it comes to the mythology of the show is an incredibly rich opportunity to explore Lucifer and Amenadiel and their relationships. Also, we get to the point of Mom meeting Chloe, who is this woman that seems to bring out this different side in her son. Imagine the Mom from Hell, except literally. It plays against expectations. She is a goddess. She is a divine being, or a formerly divine being. And so all of that is the sort of mess of a wonderful amount of story that we get to play with as she basically becomes our piece of dynamite that blows up everything between the two.

AX: Does Mom/Charlotte get involved in the crime-solving as well, or is she in a different part of the story?

AX: Now that we’ve met Mom, are we ever going to meet Dad?

HENDERSON: As of now, there is no plan to meet Dad. And the reason is, Dad is in the show. Dad is one of the most important characters. But it’s partially to do with absence. What is interesting is, [as with] all of us, God doesn’t talk back to Lucifer either. And so Lucifer’s challenge, similar to all human challenge is, how do you interpret what God wants? And to me, what’s so [interesting] about the season is, God in Season 1 was this distant, otherworldly figure that no one really could know. Well, Season 2, here’s Mom. She’s standing next to you. So you really get a contrast – the nurturing mother and the distant father. And that is the dynamic that drives Season 2.

AX: Does Mom have an origin story?

HENDERSON: We do postulate this at the very beginning. We establish who God is, who Mom is, and how they all relate. So we have our origin story, if you will, which we don’t necessarily think contradicts, but we’ll say builds out the mythology. Although I’ll tell you the beginning of it, which is, a boy met a girl and they fell in love, and together they built a house named Heaven. So that’s sort of our beginning point. But they built it together, they built a lot of this together. Now us [humans], that’s a different conversation. But the earlier celestial stuff, that’s them, they had children, those are the angels. Earth is more of a God thing, but they very much are of an equal ability and an equal power. At very least, early on. We care about telling a family drama that happens to be in the trappings of the greatest story of all time.

AX: Does Mom say something to Lucifer and/or Amenadiel to the effect that, “Your Father turned out to be a jerk towards me, but at the time, there were no other options”? Or were there other options?

HENDERSON: Are there other equals to Mom and Dad? Not right now. It’s Mom and Dad.

ILDY MODROVICH: You know what’s great about casting is, the first day Tricia Helfer worked, she did this little thing where she was talking about God, her ex, and she looked incredibly wistful. And I went, “Oh, she really loved God.” And what we always try to do in the show is to ground it. Even though it’s God, and the Devil, and angels, we try to make it a nuclear family. It’s about a family.

AX: If God and Mom are both deities who were there before Creation, how does God have the power to throw Mom into Hell? And are we supposed to read something about the origins of misogyny into that?

MODROVICH: That’s a good question. And I think we haven’t actually addressed it exactly [on air], but we’ve addressed it in the [writers’] room.

HENDERSON: We have the answer. The question is, when do we make that part of the story? We haven’t yet, but it is part of the ongoing story of, what’s the push and pull between them? Because as much as we play them as divine beings, we also play them as people. So to an extent, they have their own flaws and their own games they play, despite them being omnipotent, or, you could argue, their flaws are actually part of their long-term omnipotent games, because God is flawless, so any mistake he makes is actually part of his plan. You get into that whole crazy but fascinating game. But ultimately, what you’re asking is a larger part of the story we want to tell.

We had a long conversation, and Ildy really drove it, about making sure that the female energy wasn’t negative, making sure that it wasn’t weaker, making sure of all these other things. Obviously, on our show, we’re meeting [Mom/Charlotte] in a position of weakness, but that’s part of the long cycle of their relationship. So we’re just meeting her at a moment.

MODROVICH: No, no, no. That’s a great, great way to respond. Because right now, Mom, if you will, is losing. Or she lost the last battle. That’s not to say that Mom didn’t win about a hundred others before this. And because we’re speaking about millennia, and thousands of years at a time, maybe she’ll win the next battle.

HENDERSON: We’re finding her at a moment.

AX: Are there any female angels?

HENDERSON: And we are already plotting to meet them at some point.

AX: Is Chloe’s ex-husband Dan, the police detective played by Kevin Alejandro, ever going to twig to what’s really happening, or does he just think this Lucifer guy is annoying and very healthy?

MODROVICH: Here’s the thing – we like to torment Dan as much as possible, because he takes it so well. We like to see how much we can possibly pile upon that guy.

MODROVICH: Season 2 is Chapter 2 of that, really.

HENDERSON: We don’t let up on Dan.

MODROVICH: However, we do give him a victory. He will have a huge moment of awesome excitement.

AX: Chloe and Dan have a little girl, Trixie, who’s played by Scarlett Estevez. How are you dealing with the young actress growing faster than her character may be growing.

HENDERSON: She is growing at a wonderfully normal rate, and we’ll always write to it, because she’s absolutely fantastic. We will adapt to whatever age she gets to.

HENDERSON: She brings so much. She looks pretty similar. And we’ll just keep writing to her. And we like to build a sense of time passing throughout the season, so it will actually feel very natural. We have her age a year within the season. She’s like, “Hey, I used to be this age, now I’m a year older, so …” She’s growing up in the show.

MODROVICH: And really, it’s just more story for us, because when she gets to be a tween, that will just be more fun to address.

AX: Has there been anything about the way the show has been received that’s surprised you or particularly gratified you?

HENDERSON: Yeah, actually. Honestly, what was surprising and gratifying was, we expected a lot more backlash. We expected a lot more fans to be, “This isn’t our Lucifer, this isn’t our comic book.” And instead, they accepted what it was. They got it. If they watched the pilot, they understood that we’re playing with a similar character and a similar set of themes in a very, very different way. And I think we were different enough to allow them to separate the two, in a way where they could say, “My comic book exists. This isn’t stepping on it, this is walking a whole different path, and I can enjoy that.” So I give a lot of credit to the fans, to be honest, for being willing to sort of step aside and go, “Okay, this can occupy a whole different space, and I can still like it in a different way.”

AX: How was your Comic-Con experience.

HENDERSON: Season 1, we showed the pilot for the first time, so it was like, “Do you guys like it?” And they did, and it was incredibly gratifying. But Season 2, the fans came. And that was incredible. To have the people who love the show come to support it is amazing.

MODROVICH: Yeah, it was a very different experience, because it was all speculation before we had aired. We didn’t know how people would receive it. And this time around, we had people who had camped out to see us. And we were like, “Really?!”

HENDERSON: Whatever you expect it to be it isn’t, and hopefully in the best way possible. We are a weird mix of every single show, in the way that I absolutely love writing.

MODROVICH: Yeah. Weirdly, you can relate to it, even though it’s the Devil solving crimes. What we try to do is tell stories about humanity, things that everybody can relate to.

HENDERSON: In between the d**k jokes and the crime-solving, we try to tell, dare I say it, stories about humanity and faith and being a good person. The funny thing is, for all the protests we got, Season 1 and everything, we’re actually a show that reaffirms the idea of being a good person. We just happen to do it through the filter of the Devil.