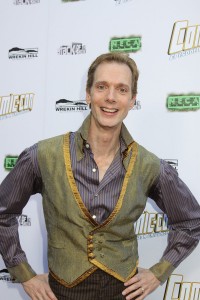 Doug Jones, one of filmmaker Guillermo Del Toro’s favorite actors (he’s the Faun and the Pale Man in PAN’S LABYRINTH, Abe Sapien in the HELLBOY movies, an unknown character in Del Toro’s upcoming THE SHAPE OF WATER and more), plays Lt. Saru, a member of an alien species not seen before in the STAR TREK universe. Jones has played aliens before, including Cochise on the last several seasons of FALLING SKIES and Dominique Wilkins on THE NEIGHBORS, as well as one of the terrifying Gentlemen on BUFFY THE VAMPIRE SLAYER.

Michelle Yeoh, the heroine of CROUCHING TIGER, HIDDEN DRAGON and many other feature films, has an extensive background in martial arts. She plays Captain Georgiou of the Starfleet ship Shenzhou. Yeoh has also starred as real-life leader Aung San Suu Kyi in THE LADY and in the series STRIKE BACK and MARCO POLO. Earlier this year, Yeoh costarred in the sci-fi thriller MORGAN.

Anthony Rapp, known for his work on Broadway in the original productions of RENT (reprising his role in the film version) and IF/THEN, has been cast as the astromycologist Lt. Stamets, the Starship Discovery’s science officer, who specializes in extraterrestrial fungus. Rapp feature credits include DAZED AND CONFUSED and A BEAUTIFUL MIND.

STAR TREK: DISCOVERY is set on the starship Discovery approximately ten years before the events chronicled in the original STAR TREK series, which chronicled the adventures of Captain Kirk, Mr. Spock, et al, aboard the USS Enterprise. Gene Roddenberry created STAR TREK, which originally ran 1966-1969. No one involved had a clue that it would spawn (so far) five live-action TV series, three feature film franchises, libraries full of novels and more pieces of merchandise than there are stars in space.