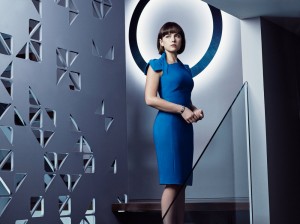 In Syfy’s new Wednesday night drama INCORPORATED, the world is run by corporations. Green zones are pleasant and belong to the rich; red zones are overcrowded dystopias filled with the poor. Ben Larson, played by Sean Teale, must play a dangerous game to conceal his ties between the two. Julia Ormond and Dennis Haysbert also star.

INCORPORATED comes from executive producers Matt Damon, Ben Affleck and Jennifer Todd’s Pearl Street Films. The series was created by Catalonian brothers Alex Pastor and David Pastor, who also wrote the films THE LAST DAYS, SELF/LESS and CARRIERS. Ted Humphrey, who also executive produced THE GOOD WIFE, is one of the EPs on INCORPORATED and serves as show runner.

ASSIGNMENT X: How do you, as brothers, divide up creative responsibilities between the two of you?

ALEX PASTOR: Well, we are very much used to working together. We talk together, we direct together, so we are used to working as a team. But it is true that what we’ve learned is that a television schedule is so brutal that we sometimes need to split responsibilities, one being with the writers in the writers’ room, breaking episodes, while the other one is in a phone meeting, Ted is in the editing room. So the fact is that it’s not only two. Ted’s show-running allows us to switch places sometimes.

AX: One of the key roles was reportedly recast after you shot the pilot. Did you reshoot the entire pilot, or just the scenes with the new actor? Did you change anything else?

TED HUMPHREY: We didn’t reshoot it entirely. We reshot the scenes that were recast, but we did shoot some additional scenes, moved some things around, added some things, based on test screenings we had of the pilot, trying to make it as good and as comprehensible as we could.

ALEX PASTOR: No, it is a show about people and the moral choices that they make, so we don’t want to blame it on the technology. Technology can be used for good or for bad, but at the end of the day, whoever pulls the trigger is a human being behind it, and we don’t want to lose sight of that.

AX: So there aren’t any computers disguised as people?

ALEX PASTOR: No, we don’t have anything like that coming up.

TED HUMPHREY: There’s not a brain floating in a jar [laughs].

AX: How much of the storyline do you have plotted out in advance? Through the end of the season, through multiple seasons …?

ALEX PASTOR: We do have a long-term game plan, big tent poles that we want to hit, but the truth is that one thing that I’ve learned being in the writers’ room, and one thing that I’ve learned just listening to different people like Vince Gilligan is, you have to keep yourself open, that sometimes people lock themselves in a narrative and they start building on towards that, and they realize that it’s not working, and they keep going forward in the same direction. Just reading that Aaron Paul’s character was supposed to die in Season 1 of BREAKING BAD, and they didn’t kill him, and now you cannot even imagine that show without the father/son f***ed-up dynamic that these two characters have. Seeing that reminds you that you have to keep your mind open and see what the other writers bring to the table, what the actors bring to the table, how the story unfolds while you’re working.

AX: Are there things you can point to that you changed from your original concept for INCORPORATED?

ALEX PASTOR: As Ted was saying, we reshot some scenes from the pilot and we added some stuff, and there’s a character that didn’t exist, Hendrick [played by Damon Herriman], who was the guy who we see Ben meeting at the park in the pilot, because we realized that we needed somebody in there with him, not only that could talk, but could have this twisted father and son relationship and a past together. And you just learn that there are certain things that you need. Even if you have in broad strokes a game plan, you want to be able to keep discovering things, or else you get very bored in the writers’ room.

AX: In creating INCORPORATED, were you influenced by any older works of science fiction?

ALEX PASTOR: Yeah. I would say that this is like the uber-capitalist version of 1984, instead of being the Stalinist version of the George Orwell book that I loved as a kid. It terrified me, it was the scariest book I read when I was twelve. But movies like SOYLENT GREEN – I think there’s a little bit of SOYLENT GREEN in there, there’s a little bit of ROBOCOP, hopefully. We’re going to try to keep that satire and that sense of humor that [Paul] Verhoeven brings to his stuff.

AX: Is there also a sense of humor in the show?

ALEX PASTOR: Yeah, yeah. I think that humor is a very powerful weapon to make points and to talk about the reality, and just because sometimes the themes can be dark or dour, doesn’t mean that the show needs to be a downer all the time. I think that the catharsis of being able to laugh – there’s nothing more incisive than THE SIMPSONS for twenty years, or THE DAILY SHOW. And you have a laugh while you’re watching it.

AX: INCORPORATED opens with a title card. Did you feel like you needed to be very straightforward, essentially saying, “Here is the world, let’s go”?

DAVID PASTOR: Yeah, we wanted to be very straightforward. We always wanted to start small and progressively move through the characters, start seeing glimpses of the world, and open up through the opening sequence. So yeah, it was always designed like that. I think the title card changed a little bit in terms of how much information do we want to give, how little, how much is comprehensible enough, watching the pilot. Plus, the information is something that you fine-tune at the end.

ALEX PASTOR: You ask the audience to just enjoy the show. If you look at LOOPER, LOOPER starts with an opening voiceover saying, “Somebody invented time travel, and we use it for this and that and that,” but that’s not what the movie is. It’s about something else.

ALEX PASTOR: We want the audience to enjoy the show and not be asking questions.

TED HUMPHREY: The ultimate point of the show is to be an entertaining show. [Someone asked a question about what the world in the show is like internationally], and it occurred to me, the real answer to that is to look at places around the world where there is a world like we show in INCORPORATED. In other words, where wealthy people live behind gates, and they drive on protected highways, and everybody else lives in slums. And then imagine what it’s going to be like when American cities are like that. That in a way is what the show is about.

TED HUMPHREY: It’s set in Milwaukee, which I think was chosen just because it’s kind of any American city, in a sense. It’s not New York, it’s not Los Angeles, it’s …

ALEX PASTOR: It’s a city in the north. The United States has become this dark hole, and it’s pretty much uninhabitable. L.A. will probably be gone. Miami, forget about Miami. People will be moving north and away from the coasts.

HUMPHREY: Which is really the point [in the story] of the illegal people living in Canada. It’s less a comment on, yes, immigration’s the oldest trick in the book in terms of riling up the electorate, but it’s more a comment on people fleeing climate change.

AX: Can you talk about your central protagonist and the journey he’s taking this season?

DAVID PASTOR: We wanted a character that navigated both worlds, then was our guide between the red zones and the green zones, somebody who embodied that dichotomy and the schizophrenic divide that we presented the world. One of the things that we wanted to do is striking this balance between a world-building show and a personal show. And this is a tricky balance that we are always trying to achieve – how to keep the stories human, but at the same time, giving hints of what the vision of the world, the scope of the world that we’re building is. So I hope that during the show, people are going to start getting bigger glimpses of what happens in the south of the country, what’s happening in Canada, what do the other corporations look like, but always seen through our heroes, and not forgetting the human story of a guy like Ben, who is embodying that temptation of forgetting about the dark side of the country, the red zones, leaving that behind, and maybe embracing a life of luxury behind gates that, if you close your eyes and you just focus on that beautiful screen that projects a forest around your road, you can kind of forget about it.

AX: What would you most like people to know about INCORPORATED?

TED HUMPHREY: That it’s an exciting, fun story to watch, that you’ll hopefully ask some questions about. In the tradition of what I think is the best speculative fiction, it’s as much about the present day as it is about the future. This is not laser beams, this is not flying cars. This is a very grounded future – the show takes place in 2074, it’s only sixty-some years away, and it’s very much a commentary on the world as we see it now and where it could be going. And in addition to that, hopefully it’s a fun ride.

This interview was conducted during Syfy’s portion of the summer 2016 Television Critics Association press tour at the Beverly Hilton Hotel.