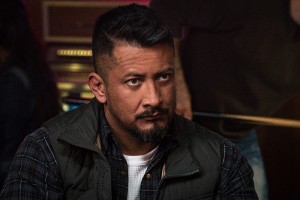 The SUPERNATURAL Season 11 episode “The Chitters” presents us with a relatively intriguing monster of the week. Meet the Bisaan, a “cicada-based” species that, like the locust, comes along infrequently but wreaks devastation when it does.

There’s a nice little fakeout at the beginning of “The Chitters.” We’re on the outskirts of a small town in Colorado, where we meet 12-year-old Jesse (Valin Shinyei) and his older brother Matty (Connor Stanhope, who played the young Lex Luthor on SMALLVILLE). The two boys are walking in the woods. Jesse is eager to leave their small town. Matty would like to leave as well, but he’s primarily concerned that Jesse may get beaten up by his schoolmates if they find out he’s gay. Then Matty is grabbed by something horrible.

Dean Winchester (Jensen Ackles) is losing sleep trying to figure out a way to save Castiel. Amara has Cass’ body because her nephew Lucifer is inside it. Amara is mightily angry at Lucifer, and Dean and brother Sam Winchester (Jared Padalecki) are both worried Amara may kill Cass in frustration. Since no solutions are forthcoming, Sam finds a case in Colorado – where a woman saw her female friend get abducted by something horrible.

The local sheriff (Kandyse McClure) does concede that every twenty-seven years since the town’s founding, a bunch of people seem to go missing. The survivor of the attack says that her friend was attacked and dragged off by a being that was hairless and lacked genitalia. Then the friend came back with glowing eyes, making a buzzing, hissing sound – and the survivor ran for it.

Then there’s another attack at a skate park, where several kids are killed. Sam checks out the skate park and Dean goes into the woods. (Really, Dean? Going by yourself into the woods? Are you in a generic slasher movie? Oh, never mind …) Dean of course gets attacked, but is rescued from certain death by a pair of Hunters, Cesar (Hugo Ateo) and the now-grown Jesse (Lee Rumohr).

Jesse and Cesar are a couple. They’ve heard of the Winchesters, but believed the brothers died awhile back (needless to say, they have no idea that this is correct, many times over). Cesar and Jesse also know all about what Sam and Dean are hunting. These are Bisaan, cicada-like Malaysian forest spirits. They kill humans, but they also require human hosts in order to mate, lay eggs, then stay in the ground for twenty-seven years. Jesse and Cesar have spent a lot of time doing their hunting in Mexico, but now they’re here so that Jesse can get revenge for Matty.

The teams split up – Sam goes with Jesse, and Cesar stays with Dean. Cesar is concerned about what will happen once this is over, since revenge won’t fix what’s broken in a Hunter. He and Dean find the Bisaan nest and do battle with the creatures protecting the eggs.

Jesse and Sam go to confront the town’s former sheriff. Jesse is furious that the sheriff actually knew about the Bisaan at the time Matt was killed. The Bisaan infected the sheriff’s daughter and he had to kill her. After that, the sheriff was too broken-hearted to do much of anything.

Sam and Jesse catch up to Dean and Cesar in the nest. Jesse finds Matty’s body (he recognizes it by the rare coin that’s still with the corpse) and grieves. The guys burn the nest, preventing a new generation of Bisaan from plaguing the population in another twenty-seven years.

Dean and Sam think it might be a good idea to join forces with Jesse and Cesar, who are pretty handy with weapons and lore. However, before they can suggest this, Jesse and Cesar declare that they’d agreed that this would be their last hunt. Now that Jesse has some closure on his brother’s death, he and Cesar are going to raise horses in New Mexico. The Winchesters don’t have the heart to ask the other two men to abandon their happy ending.

Since SUPERNATURAL has gay subtext you couldn’t cut with the First Blade, it’s good to see the show make it text for once with an actual gay couple. Moreover, the two men in question are standup heroes who make it out alive. No stereotypes or gay tragedy tropes here, which is all to the good.

Sam and Dean obviously see parallels to their own situation in terms of Jesse being driven by brotherly love for the deceased Matty and in finding another inseparable pair of Hunters. It doesn’t resonate all that much, mainly because what “The Chitters” has to tell us about the Winchesters is stuff we already know. However, the Bisaan mythology is fun and makes sense, in a monster-sense way, and we’re in good company throughout.