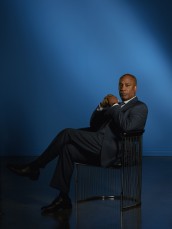 The actor also talks about the series' legacy 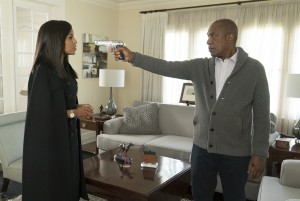 ABC’s SCANDAL is now in its seventh and final season on Thursday nights. Shonda Rhimes created the series about Washington, D.C. fixer Olivia Pope, played by Kerry Washington in a twice-Emmy-nominated performance.

Olivia’s morally flawed, superpower behind-the-scenes father Rowan Pope is played by Joe Morton, who won the 2013 Guest Actor Emmy for his work before he was made a SCANDAL regular. Morton, originally from New York, was nominated for a Tony Award for his work in the 1974 production of the musical RAISIN. He starred in the title role in filmmaker John Sayles’ cult film BROTHER FROM ANOTHER PLANET and has worked steadily since in movies, stage and television, including TERMINATOR 2, THE GOOD WIFE, EUREKA and the recent JUSTICE LEAGUE feature.

When ABC arranges a SCANDAL set visit for the Television Critics Association (TCA) press tour, Morton is on hand to talk about the charms and challenges of playing Rowan Pope.

ASSIGNMENT X: This character has called for you to deliver some very heightened dialogue. Do you sell it by just believing in what you’re saying enough …?

JOE MORTON: That is the job.

AX: It seems like Shonda Rhimes puts a lot of faith in your ability to sell things that a lot of people probably could not, and I wonder what that feels like.

MORTON: I take that, thank you, as a compliment. Because I used to say the same sort of thing about Peter O’Toole, that Peter would do things that I thought, “Oh, my God, no one else could do that.” In BECKET, at one point he says, “If you say something to hurt me, I’ll scream,” and then later on, he does, and you think, “No other actor could get away with that.” So there are moments when I think the actor and the material sort of meet, and it all seems to work.

AX: There’s a particular cadence to the dialogue. Do you ever find yourself talking like Rowan away from set?

MORTON: I think probably for most of it, it’s SCANDAL speed, so that you go to another show or you’re doing a film, you have to remember, “This is not SCANDAL, I don’t have to talk that quickly.” So I think that’s probably the biggest thing that we try to do differently outside of SCANDAL.

AX: Is it hard not to take SCANDAL home with you sometimes?

MORTON: Take it home? No, for me anyway, once I’m done with the scene, I leave it here at the studio. Because television is not like doing a play or doing a film. I did TURN ME LOOSE, which is a play about [civil rights activist] Dick Gregory, and that I had a tendency to bring home, because it was so political and so about something that he talked about forty-five years ago, that we’re now facing again today. So to do a play like that and to turn on the news, I’d be in it. Whereas I can do this and go home and turn on the news and think, “Yeah, we talked something about that, but not exactly the same” [laughs].

AX: When Rowan is talking about dinosaur bones, do you ever have EUREKA flashbacks, given that that sci-fi show had things like dinosaurs at times?

MORTON: No. EUREKA was a whole different character, a whole different world. No, not at all. It was about a group of geniuses who were trying to figure out who they were and what the future was going to be and working for the DoD, et cetera, et cetera, whereas with this man and this dinosaur in his life and around all of that, it’s the most important thing other than his daughter and the Republic to him.

AX: Is it harder to do something like SCANDAL, where you have a super-heightened reality, or something where you’re doing something that’s straight-out sci-fi or fantasy, in terms of setting a reality level?

MORTON: Right. Melodrama is tricky, because it is melodrama, because it’s over-the-top dramatics. And so you need to know the technique of how to deal with it, which means what you said before, you have to embed yourself in as much truth as possible. Otherwise, it comes across as an old black-and-white “Heh-heh-heh” movie. And nobody wants any moustache-twirling in this show.

AX: How many times have you been sure that Rowan was about to die? He’s been in so many dire situations …

MORTON: See, it’s funny – I’ve never thought that he was going to die, and I think everybody else had. I’m trying to remember what season it was, maybe it was four or five – but I got stabbed, and I found out that there were prayer circles, out in the real world, in hopes that he would stay alive. So that kind of confidence made me just think, “He’ll always be alive.”

AX: How do you respond to hearing that there are prayer circles out in the real world for your fictional character?

MORTON: In that sense, I think it’s fine. I think it only gets scary when real politics get spoken of in terms of SCANDAL. Then you have to remember that, “No, no, no, that’s real, this is a show.” But in terms of audience members wanting the fictional character to stay alive to the extent that they do prayer circles I think is wonderful. I think that’s a wonderful thing.

AX: Do you think that one of the reasons SCANDAL has to be ending about now is that there isn’t much more room above the top? It seems like every season gets more and more heightened, and it feels like it can’t get much more extreme …

MORTON: If anybody else had created the show other than Shonda Rhimes, I’d agree with you wholeheartedly. But Shonda has always said that she had a definite ending for the show from the time it started. So the only thing that changed in terms of her views of that ending was that the election that we just had, had a different ending, and so she had to modify whatever she had in mind to the new person who’s in the White House.

AX: Was it a bit bizarre to be coming into this set to work, and then, like you were saying, turning on the news and seeing what’s happening in the real world?

MORTON: It is. This is fiction, right? So we go way beyond, or one hopes we go way beyond what the real world is actually doing. Although I met someone when I was talking about Rowan who said, “In the real world, he would be considered an interesting character.” Which was a little scary. But yeah. I think that what our writers do is, they do a lot of research and they parallel in some fictitious way what’s really going on, and in a couple cases, they were actually ahead of the curve, which is even more frightening. But that happens, right? It’s like even a broken clock has to be right twice a day. So for us, I think that’s what it’s been, is both those moments where I think, “Oh, my God, we were ahead of it,” and then, “Oh, my God, we’re doing what they’re doing, and isn’t it scary?” But I think the political shows that sort of cropped up in the last few years were all doing that, HOUSE OF CARDS in particular. Because they were doing it for real, even though that was based on RICHARD III.

AX: What do you see as the enduring legacy of SCANDAL, once it’s over?

MORTON: There are so many things. One is, Kerry Washington was the first black female to be in the lead of a drama in forty-five years, something like that. So that’s Number One. Two, personally, I couldn’t remember any show that had a black male character like the one I’m playing on this show that had that kind of power, that kind of language before, so that’s part of it. And the fact that this show, for all of its melodrama, was in some way paralleling what was going on in the real world politically. And then the fact that, if this show didn’t start it, it certainly was among the first to start using social media as a direct input in terms of, the audience could watch the show and, in real time, talk to the actors who played those characters as they’re watching the show. That’s just genius, it really is – a different kind of genius than Donald Trump talks about, but genius nevertheless.