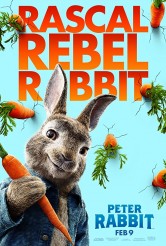 PETER RABBIT is set in the present, but it manages to still preserve some of the look of the Beatrix Potter illustrations that inspired it. As to Potter’s stories, there are indeed rabbits named Peter, Flopsy, Mopsy and more, there’s a hedgehog called Mrs. Tiggy-Winkle and there’s a cranky Mr. McGregor – two of them, in fact – determined to keep the woodland wildlife out of the garden.

There’s also, in tribute to Potter, a character called Bea (Rose Byrne), who paints not-great abstracts but is wonderful when it comes to illustrations of the rabbits and their friends (with Bea’s work represented by the real Potter’s imagery). The mixture of live-action humans and set pieces with 3D CGI animals is much of a piece with what we’ve seen in PADDINGTON, et al.

However, the real inspiration for PETER RABBIT seems to have come from Chuck Jones cartoons, where one adversary keeps trying to destroy another. Here, it’s mostly gardening implements rather than Acme products, and the results aren’t as fast and funny, but the flow is much the same for a lot of the film.

Bea adores the wild creatures who live around her country home, although she never seems to notice that some of them are partially clothed. (This becomes a story point.) Peter Rabbit (voiced by James Corden) adores Bea right back. After Peter raids the garden of Old Mr. McGregor (Sam Neill), the man tries to kill the carrot thief (he succeeded in killing and eating Peter’s father at some time in the past), but instead dies of a heart attack. For Peter and his family – sisters Flopsy (voiced by Margot Robbie, who also narrates), Mopsy (voiced by Elizabeth Debecki) and Cotton-Tail (voiced by Daisy Ridley), their cousin Benjamin (voiced by Colin Moody) – and the assorted badgers, hedgehogs, pigs, frogs and other critters, this means the house and garden are theirs.

However, McGregor’s home is inherited by a great-nephew, Thomas (Domnhall Gleeson), a neatnik with some endearing qualities, who comes up from London with the intention of cleaning up the property and selling it. Thomas doesn’t want the animals in his garden and takes steps to keep them out, although next-door neighbor Bea urges him to share the space with them. Thomas and Bea start to fall for each other, inciting Peter’s jealousy. Claiming it’s all about the garden, he enlists the other animals in declaring war on Thomas, who keeps trying to fight dirty but getting bested by the bunnies.

There’s a lot of ROAD RUNNER-type slapstick that plays best when it’s interrupted by Bea, whose appearance temporarily forces Peter and Thomas to pretend to like each other. There are also a fair amount of explosions, even though (spoiler alert for parents wondering about age-appropriate viewing for kids) no one is actually injured by them.

There’s also a gently entertaining stream of meta-commentary throughout the script by Rob Lieber and Will Gluck, with asides to the audience and a few pertinent questions to the set-up here, although it never gets around to asking why Bea doesn’t just plant her own vegetable garden so the rabbits don’t keep endangering themselves.

Gluck, who has been a live-action director up until now, gets convincing-looking interactions between his live actors and their CGI costars. However, he doesn’t know how to go for moments of the kind of adorableness that this sort of CGI seems designed to showcase. It isn’t a matter of exercising restraint; there are times when we seem meant to go, “Aww,” but the incentive isn’t there.

Corden hits the right notes with Peter’s voice, and Byrne and Gleeson throw themselves into their roles with an admirable lack of inhibition.

The children in the screening audience seemed to really enjoy PETER RABBIT. If you find yourself watching it and can judge the film on its own merits, you’ll probably be mildly amused but not especially edified. If you go in expecting any reflection of Potter’s sensibilities, you may wind up horrified.