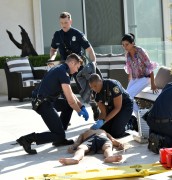 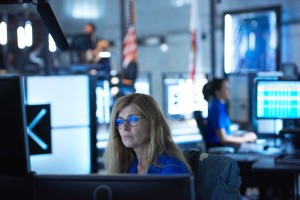 9-1-1, Fox Network’s drama about first responders airing Wednesday nights, has already been renewed for a second season. The series follows a team of police, headed up by Angela Bassett’s Athena Grant (Bassett is also one of 9-1-1’s executive producers), a squad of firefighters led by Peter Krause’s Bobby Nash, and an emergency call center, where we focus on operator Abby Clark, played by Connie Britton.

9-1-1 is created by the prolific trio of Brad Falchuk, Tim Minear and Ryan Murphy. Murphy and Falchuk have together authored numerous series under the banner of Ryan Murphy Television; Minear has previously worked with them as a writer and producer on AMERICAN HORROR STORY and FEUD.

Minear created several series of his own, the FBI drama THE INSIDE and the action thriller DRIVE. He’s also known for working on ANGEL, FIREFLY and DOLLHOUSE with Joss Whedon and on TERRIERS and CHICAGO CODE with Shawn Ryan.

ASSIGNMENT X: Would you be a producer if producing did not allow you to write and direct?

TIM MINEAR: Well, in television, writers are producers, and that’s really the freedom for a writer, is that in television, as a writer, you’re allowed to direct, you’re allowed to produce the show, you’re allowed to be involved in all elements of the production. So I think a lot of times in movies, for instance, the writer’s work gets taken away, and they don’t even get to go to the set. So here we get to really see the thing from its conception to its birth, and often, in my case, to its death, which is why my Twitter handle is @CancelledAgain.

AX: Although you haven’t been canceled for awhile now …

ASSIGNMENT X: How does you work with Ryan Murphy’s production company? Does Ryan Murphy say, “I’m working on this, do you have any interest,” and you say yes or no?

MINEAR: Yeah, pretty much, if he’s working on something. He didn’t initially think of me for this, and then he did. And then he asked me if I’d be interested in joining him, and I said, “Sure.”

AX: Well, 9-1-1 seems like it has some of your creative background, as far as your work on THE INSIDE and TERRIERS and CHICAGO CODE …

MINEAR: Yeah, I’ve been in this genre before, for sure.

AX: Speaking of genres you’ve been in do you have any thoughts about the twenty-first anniversary of BUFFY, which led to your work on ANGEL?

MINEAR: I can’t believe that it’s been that long. I’m also gobsmacked at how long ago was I working on THE X-FILES, in ’98.

AX: And here THE X-FILES is again …

AX: With 9-1-1, are you bringing any of your own emergency experiences to this?

MINEAR: Yeah, actually. I’m actually dealing with Alzheimer’s in my life right now, and there were some scenes that I’d been writing between Abby and her mother [played by Mariette Hartley, whose character Patricia has Alzheimer’s] that, literally, the thing is happening to me the day I’m writing the scene. So I would say yeah.

AX: You have my sympathies.

MINEAR: Well, no, because we know these people [Bassett has starred in and directed on multiple seasons of AMERICAN HORROR STORY], and it’s always collaborative with us. So it’s actually not different in a way.

MINEAR: Yes, it is, actually. I mean, we had talked about for a long time, maybe we just wouldn’t say where it took place, so it could be a little more free-flowing, but when you’re shooting in L.A., it looks like L.A., and part of the specificity of a city suggests what the emergencies might be, and so we just leaned into it.

MINEAR: We prefer to call that haze.

AX: Will any emergencies involve people reacting to the air quality?

MINEAR: Well, I was part of that discussion with Ryan and Brad. It was always the idea that, we’re not doing a medical show, right? We’re doing a first responder show. And what’s interesting about that to us is that you’re not following that story through the hospital doors, and that these people aren’t there to sit there and see how it came out, they’re there to deliver and move onto the next thing. And we wanted a real sense of that, and how that’s actually part of the characters, and part of the story.

AX: Is it difficult to figure out how to your regular characters from different departments together?

AX: Is it more fun to figure that out than to start with something like ANGEL, where they are all together and you have to figure out how to service each of them?

MINEAR: Well, everything has its own challenge, but I think this is kind of fun, to see how things can weave and overlap and intersect. That’s always fun.

AX: Do you have a favorite aspect of it, the cops or the fire or the 9-1-1 or the home stories?

MINEAR: No. I think it all works as a piece, so I wouldn’t say I have a favorite aspect of it, although I think the actual on-the-ground emergencies that Bobby and his crew show up to are probably the most visceral. And then when you can get Angela’s character into that, and Connie’s character, then you’re really cooking.

MINEAR: That we love this arena, we love a great network drama, and I resist calling it a “procedural,” because it’s not a procedural, in terms of, there’s a body and we have to discover how that body got dead. It’s a first responder show. So it’s more like a series of viral videos, much more in the moment, much more urgent, much more WTF, and then you’re onto the next thing.