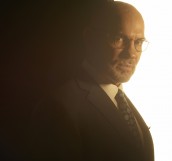 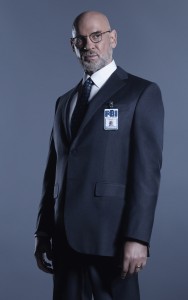 Twenty-five years after it began – and after two movies, five Golden Globe awards, and an historic impact on genre TV series – THE X-FILES is back on Fox Network for a ten-episode eleventh season on Wednesday nights. David Duchovny and Gillian Anderson are back as FBI Special Agents Fox Mulder and Dana Scully, who investigate possibly paranormal and/or extraterrestrial events with varying degrees of belief and skepticism. Also back is Mitch Pileggi as their enigmatic boss, Walter Skinner, whose past gets examined in the February 7 episode, “Kitten.”

Pileggi, a native of Portland, Oregon, has been with THE X-FILES since the middle of its first season in 1994; Skinner was introduced in the episode “Tooms.” Pileggi has a number of other genre credits as well, with recurring roles on TARZAN, DAY BREAK, STARGATE: ATLANTIS, MEDIUM and SUPERNATURAL; non-genre work includes GREY’S ANATOMY, SONS OF ANARCHY and the 2012-2014 run of DALLAS.

Speaking with Pileggi (pronounced Pill-EDGE-ee), it’s clear that THE X-FILES is a source of great pride and affection.

ASSIGNMENT X: Were you surprised when X-FILES came back for a tenth season two years ago, or are you at this point, “Nothing about X-FILES surprises me”?

MITCH PILEGGI: Nothing surprises me. No, it was a pleasant surprise when it came back two years ago, and then to have it come back again this time, and even have more episodes, it was a treat.

AX: What was the point when you stopped being surprised at the longevity of X-FILES? I’m sure at the beginning, it was like, “This is still here?” Not because of quality, but just because it’s so hard for anything to endure the way X-FILES has.

PILEGGI: I came in late in the first season, so they had been going a little bit at that point. And when I came on, we didn’t really know what we had. David said he thought the show would last six episodes and be out. Here we are twenty-five years later. Not the case [laughs]. So with any show, it’s really difficult to anticipate or predict how it’s going to do or what it’s going to do. You think you’re on a show that’s going to last forever, they pull the plug on it after eight episodes. You don’t know. It’s so unpredictable that there’s no point in even trying to guess, but I think the second season, we were nominated and won the Golden Globe. If you put any weight into awards, that was fairly impressive and gave some indication that there was a pretty positive thing going on with this, with what we were doing.

AX: Are you still finding out new things about Skinner, or at this point, is he like a pair of comfortable old shoes?

PILEGGI: No, I know him. I know him inside and out, and he knows me. 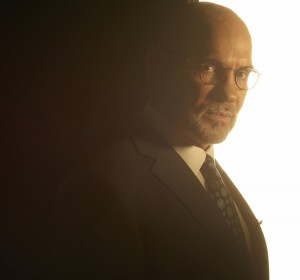 AX: What does he know about you?

PILEGGI: [laughs] He knows what kind of underwear I wear.

AX: What have you learned about Skinner over the years?

PILEGGI: Well, just as time has progressed and the character and the show have progressed, I know who he was, where he comes from, and this season, you learn a lot more about him and his past experiences and what makes him who he is and behave the way he does and do the things that he does.

AX: What is Skinner’s attitude at this point towards belief/non-belief/what he thinks is happening as far as the paranormal and/or extraterrestrial visitations?

PILEGGI: He’s definitely seen things, and he definitely has his own beliefs, and he’s seen things previously when he was in Vietnam. He had an out-of-body experience that he relates to Mulder, I think, in Season 2 or 3. So he’s had his past experiences, and that’s one of the things that draws him to Mulder and Scully. So there is definitely a belief system set up within him to accept it.

AX: But does Skinner believe less than Mulder does, or is he just more pragmatic about fighting the system?

PILEGGI: I think he’s definitely pragmatic in everything he does. But he does have faith in what Mulder and Scully are searching for, so that’s why he’s become their champion within the FBI.

AX: Who has a more secure secrecy system, the X-FILES production company, or the government?

PILEGGI: Well, I’ll tell you what – we’ve been able to keep secrets pretty good this time around, so THE X-FILES right now, I think we’ve probably got it down where leaks are not prevalent. Our government is what it is.

AX: Did you at any point do research for the character into the FBI, or Area 51, or …?

AX: Does everybody approach acting or their characters the same way they always did, or are there different things now?

PILEGGI: Well, I think we’ve all matured as actors since the beginning of the show, and hopefully we’re better. We’ve matured in our lives and in our own skins, so I think hopefully what we’re doing with the characters has progressed some from what we started with.

AX: Do you and your X-FILES colleagues keep in touch during the periods where you’re not working together?

AX: Are you actively happy when X-FILES comes back?

PILEGGI: I’m always happy, yeah. I’m always happy with it. It’s a great character, it’s a great show, and it’s a great group of people to work with. I always have a ball doing it, especially if we’re shooting up in Vancouver, because that’s where the show belongs. And my wife is Canadian, she’s from Vancouver, and my daughter was born there, so we always love going back to Vancouver and hanging out, doing THE X-FILES.

AX: Are you still gratified by the fan response?

PILEGGI: Very much so. The fans have always been great. It’s why we’re still here, because we have such an amazing fan base. They’ve stuck with us for so long. So that is, like I said, tremendously gratifying also.

AX: And what would you most like people to know about THE X-FILES?

PILEGGI: I don’t know. The truth is out there, the lies are out there, I want to lie, I want to tell the truth. There are a lot of lies out there. But THE X-FILES – I just hope that people are liking the stories and they like what we’re doing with it.