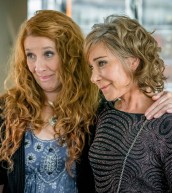 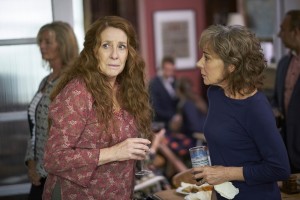 GIRLFRIENDS, originally produced in England for ITV and available in the U.S. on the Acorn.tv streaming service, is a six-part drama that revolves around the friendship between three women “of a certain age,” played by Phyllis Logan, Miranda Richardson and Zoe Wanamaker.

Logan’s character Linda finds herself under suspicion when something happens to her husband Micky (Steve Evets). Logan, who hails from Paisley, Scotland, is best known in the U.S. for her six seasons as the steadfast Mrs. Hughes on DOWNTON ABBEY, and for playing the protagonist’s upper-crust benefactor Lady Jane Felsham on LOVEJOY.

At a Q&A panel for GIRLFRIENDS and then in a one-on-one conversation afterwards, Logan discusses playing the dynamics of lifelong female friendship.

PHYLLIS LOGAN: Well, the piece is very contemporary, anyway, and that’s what are lives are like, aren’t they? We have girlfriends. I suppose it is closer to home. I think there’s always an element, but not of the fact that you’re playing the part. There’s always an element of you in whatever you do, I think. And saying, “too close to home,” not really. I don’t have Linda’s experience either in her marriage. I do have experience with having good long-term relationships with my girlfriends, my girlies. We still talk about going on a girls’ night out. So yes, I do have that in common with Linda. But it’s just nice, and you bring something of yourself, but it’s nice to challenge yourself with other peoples experiences and what they’re going through, and it’s all to the good.

AX: How soon do we find out what actually happened to Linda’s husband Micky? Do we think Linda may actually have done something?

LOGAN: Well, I don’t want to issue too many spoilers. But in Episode One, we don’t know what’s happened to Micky, played by the wonderful Steve Evets. Throughout the series, things chop and change. Suspicion falls in various directions, and then it gets cleared up and then it falls back. So it’s not a simple answer without telling you the whole plot of the six episodes, so I’ve got to be careful about that. But there are certain things that get thrown up about where suspicion may lie.

AX: Can you talk about coming out of the six-year run in DOWNTON ABBEY and doing something very different like GIRLFRIENDS?

LOGAN: It’s great. I never planned that I was going to be doing six years of DOWNTON ABBEY. None of us did. But as it transpired, I was happy that it did last that long. And I love playing the character and I love working with the rest of them, and we all had a fantastic time.

But if they said to me, “Here’s a job and you’ll be in it for the next six years,” I might have gone, “I’m not so sure about that.” Because this is part of what we want to do. And when you first embark upon your career, I thought, I just want to do as many different things as I possibly can. I started off in rep and froze to death, where you played several characters throughout the season, old people, old grannies, young blokes. I used to play them as well, I used to play a series of Shakespearean youths with penciled-on moustaches and stuff. So that was all part of the deal, that you just have an array of different characters and different jobs. Having said that, I loved doing DOWNTON ABBEY for six years. But [I also like doing] something like this or THE GOOD KARMA HOSPITAL, doing contemporary drama, and then going onto something like this where it’s quite gritty, but it’s funny as well as being quite dramatic, and twists and turns and a bit like a detective novel. It’s just great to do different things, so I’m very lucky.

AX: Do you have any information on what, if anything, is happening with the DOWNTON ABBEY movie?

LOGAN: It’s not dead in the water by any means, but then, I’m waiting for the call.

AX: Do you have any kind of a preference between comedy, drama, more naturalistic, more high-style?

LOGAN: No particular preference, but I would like to do a bit more comedy, I think. In fact, out and out farce would be great – I’d love to do a farce.

AX: Is there much farce in British television, apart from sketch comedy?

LOGAN: I’d need to do a restoration comedy or some sort of Feydeau farce at the National Theatre or something like that, probably would be the only way I’d get to do a farce. But yes. Some slapstick, out-there comedy, I’d like to have a go at some of that.

AX: Do you have any desire to produce your own material, maybe partner with a writer and say, “Perhaps we could create this sort of story for this sort of character …”?

LOGAN: Well, it’s never come to that, but that’s not a half-bad idea, if somebody might come up, and I had the idea of what sort of character, I could approach somebody with that. That hasn’t happened yet.

AX: Does having been on DOWNTON give you a little more clout?