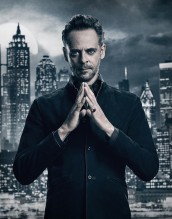 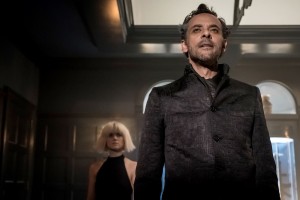 In Season 4 of GOTHAM, Thursday nights on Fox, it appeared that young Bruce Wayne (David Mazouz) had killed Alexander Siddig’s character, the enigmatic and nefarious Ra’s al Ghul. However, this is GOTHAM, where the dead don’t always stay dead. Moreover, Siddig remains in the opening credits and has appeared in previews for future episodes, so it seems Ra’s isn’t done tormenting the future Batman just yet.

ASSIGNMENT X: R’as al Ghul is a pretty major villain in the BATMAN canon. Had you ever wanted to play him before you got involved in GOTHAM?

ALEXANDER SIDDIG: Never heard of him. I didn’t know anything about the lore of BATMAN. I love the BATMAN movies, but because I didn’t read the comics, I didn’t know what any of that was. So I was so excited when I found out, and my friends who were fans of the lore said, “You’re playing Ra’s al Ghul? You have no idea what kind of character, how good that is.” So now of course I’m having a great time. I’m loving it.

AX: How physical is your Ra’s al Ghul?

SIDDIG: He’s pretty physical. He moves, he fights, he does martial arts – he’s pretty good at it [laughs].

AX: Did you have to learn how to do any of that?

SIDDIG: Completely. I learned how to do some aikido. I can’t say I’ve learned, because it takes years to learn, but I’m getting help from aikido senseis, which is great.

AX: You were on GAME OF THRONES, which is obviously a big action show, but I don’t think you ever got to do any swordplay there.

SIDDIG: [laughs] I did not get to do any swordplay. I had gout. I was sitting in a wheelchair.

AX: Did you feel sort of left out?

SIDDIG: Yes. I felt it was a huge mistake, not letting me get up. My brother Oberyn [played by Pedro Pascal] took all the plaudits and got himself killed, like a fool. But yes. I wish I’d been a standing-up guy.

AX: Well, on the other hand, your career did not need the boost, because genre fans already knew who you were, and now everybody knows who Pedro Pascal is, so …

SIDDIG: Yeah, it’s so true. No, I’m ever-grateful to those guys at GAME OF THRONES. I really enjoyed my little stint there. I was a bit disappointed I didn’t do a bit more. I thought we had some more to say, but we didn’t get to say anything else.

AX: Well, at least they didn’t ask you to gain a bunch of weight; in the books, Doran is quite heavy.

AX: By the time you got involved in GAME OF THRONES, did you know it was already quite a big deal?

AX: So is this sort of your career plan, to be in all the big genre projects …?

AX: Well, even if you had stopped with DEEP SPACE NINE, you’d still have your sci-fi bona fides.

SIDDIG: I’d be in one of the biggest, yeah. I can’t tell you how privileged I am. And I say this with a big grin on my face, because you can’t see when you’re [reading this], to do all these cool shows. And you know what, not to be associated particularly with any one of them. I mean, some people like me for STAR TREK, and a few others like me for something else, but I’m not married [to any one show] – I’m polygamous, and lucky to be so.

AX: You do straight drama as well – you did a romantic lead in CAIRO TIME, which was made in Egypt with director Ruba Nadda …

SIDDIG: That was beautiful. One of my favorite movie experiences. Ruba Nadda was wonderful. I think Patricia Clarkson is the reincarnation of Katie Hepburn. That’s the same actor to me. I’m amazed how wonderful she is.

AX: Had you been to Egypt before, or was that new for you?

SIDDIG: I’d been. I was born in the Sudan, which is a neighboring country, so over the years, I’d been to Egypt to see my family in exile.

AX: Had you worked in film in Egypt before?

SIDDIG: No. First time filming there.

SIDDIG: A complete nightmare. It’s constant bullying and blackmailing and trying to get someone to get off the road and move a donkey and clear a traffic jam. But we did it, we did it. Ruba Nadda can speak Arabic, so when she gets angry, she just screams at these men in Arabic in Cairo, and they would sheepishly walk away.

AX: Was it fun to have a larger role that’s maybe a little quieter than some of the genre characters?

SIDDIG: Yes. I do them from time to time. I’ve been, again, really lucky, starting off quite commercial, perhaps, but still very independent with SYRIANA, and then a few French films, and then that film, and then working on another movie with Ruba. I am so blessed. I have done so many different things.

AX: And did you ever get to make NIGHT WITCHES, the film you had been planning to direct about the WWII Soviet women air pilots?

SIDDIG: No. I wish I had. I’d love to. So I’m producing now. I’m working with companies in both England and the U.S. to bring terrific television to the thing, but maybe with a vaguely Arabic flavor. 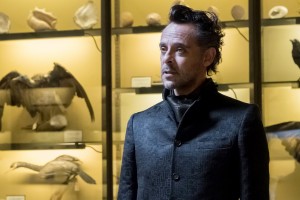 AX: Back to GOTHAM, how did you get involved with the series?

SIDDIG: I learned that it’s all very symbiotic. I work with a really big company out here in Los Angeles called Anonymous Content. I’m lucky enough to be one of their clients. So working with them, and we’re pushing various projects around the world.

AX: Do you have scenes with any of the regulars besides David Mazouz as Bruce Wayne?

SIDDIG: Yes. I have scenes with Ben [McKenzie as James Gordon] and I have scenes with Erin [Richards as Barbara Keane], so I’m manipulating a lot of people on this show, not just David. I’m a lot of people’s worst nightmare. I’m actually really, really unpleasant. They should invent a new superhero, and call him not Ra’s al Ghul but Gaslight. Because that’s what I’m doing to everybody [laughs].

AX: Now that you have the role, have you checked out either Liam Neeson or John Barrowman’s portrayals of Ra’s al Ghul?

SIDDIG: I saw Liam Neeson. I didn’t see John Barrowman. Apart from reading the Wikipedia page, which is like that, not very big, at least the one I saw, I tried not to read any information about Ra’s al Ghul, because I think that when the right actor turns up, they should just do it. So I don’t want to know what Liam – I saw him do it, but I don’t want to know more about it. I’m trying not to research. I even changed the name to [pronounces it] “Raysh.” He’s not “Razz” anymore.

SIDDIG: Just pronounce it. “Raysh.” Which is actually a Hebrew pronunciation. [It means] “head.”

SIDDIG: There are two movies. One is called SUBMERGENCE, with James McAvoy, and the other one is called LITTLE VOICE.

AX: And what would you most like people to know about Season 4 of GOTHAM?

SIDDIG: Actually, I’ve got a message for the people who watched the first episode of GOTHAM, or the first season of GOTHAM. They need to come and look at it again. Because when GOTHAM started, it was quite clean and neat and tidy, and seemed meant to be lightweight. It has got a whole lot heavier and darker and more difficult, and I think people will really enjoy it.