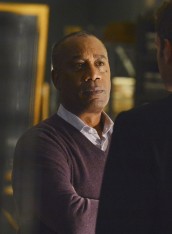 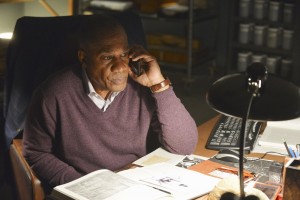 In Part 2 of our interview with Joe Morton, we go in for an exclusive conversation on how the actor feels about the end of SCANDAL, now in its seventh and final season Thursday nights on ABC. Morton recently took some time to play civil rights activist Dick Gregory in a production of TURN ME LOOSE at the Annenberg Center in Los Angeles, which may be revived elsewhere, and is in JUSTICE LEAGUE as Dr. Silas Stone.

ASSIGNMENT X: So are you sad to be seeing SCANDAL wrap up, or do you feel like your character Rowan Pope has gotten so dark that taking him any further would cause him to become a black hole in space that eats planets?

JOE MORTON: [laughs] I think I’m both sad and excited all at the same time. Because I know that for the writers, what it’s going to mean is, they’re going to give us everything they can. So this last season is going to be explosive, I’m sure.

AX: When you started on SCANDAL, were you told that Rowan was eventually going to get this dark?

MORTON: No, this is all just evolution.

AX: Very often, you play pretty good, upstanding people, so was Rowan a fun change for you?

MORTON: This was actually something I was looking for when I came out [to Los Angeles], right before I got the part. Because I’ve played good guys for all of my career, most of my career, I was looking for a very smart bad guy. And this one landed in my lap. I came to L.A. for pilot season, I watched SCANDAL Season 1 on Netflix, fell in love with it, and thought if I could find a way to get on the show – but before I talked to my agents about it, they called me and said, “SCANDAL [wants] to bring you onto the show.”

AX: When you were coming on to SCANDAL, did you and leading lady Kerry Washington, who plays Rowan’s daughter Olivia, talk at all about the family relationship?

MORTON: She didn’t know. I was the only one who knew that I was her father. 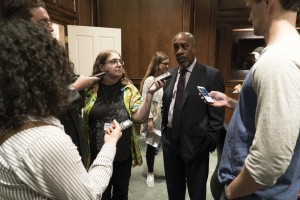 AX: How is working with a show runner/series creator like SCANDAL’s Shonda Rhimes who is very guarded about where the story and characters are going, as opposed to, “Okay, your character is going to …”?

AX: I’m sure you’ve gotten this question a lot, but with what’s going on in the real world, do you feel like sometimes SCANDAL isn’t outrageous enough?

MORTON: I think the difference between us and the so-called real world is that Shonda is trying to tell the truth, and some of those folks in the real world are doing an awful lot of lying. I think maybe you’ll hear those things [like “alternative facts” and other odd terms], but maybe from characters that you don’t expect to hear them from. So yes. We can’t help but sort of deal with what’s going on. But not in any literal way.