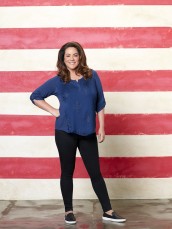 The actress discusses playing a character who is true to herself 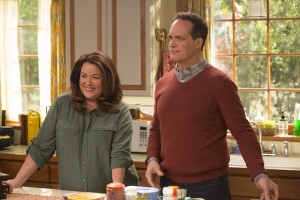 On ABC’s AMERICAN HOUSEWIFE, now in its second season on Wednesdays, Katy Mixon stars as the title character, Katie Otto. Katie has an easygoing husband (Diedrich Bader) and three kids of varying temperaments. She is a normal-sized woman with middle-class issues, but the Ottos have moved to a Connecticut suburb where all of the women seem to be Size 0 and obsessed with perfection. Katie struggles to maintain her sense of self, along with keeping her family up and running.

Mixon previously costarred for six seasons on MIKE & MOLLY as the sister of Melissa McCarthy’s character. In features, the actress has had dramatic turns in HELL OR HIGH WATER and STATE OF PLAY, among others.

KATY MIXON: It’s the very first. I had three pilots and I was on EASTBOUND AND DOWN on HBO. But [MIKE & MOLLY was] the very first sitcom pilot that has gone to series, so yes, ma’am.

AX: In AMERICAN HOUSEWIFE, you’re the lead rather than part of the supporting cast. How is it being the center?

MIXON: I don’t think about it. I literally don’t think about it. I just do it. I can’t meditate on that, do you know what I’m talking about? But, because I’m in a situation where I’m in leadership, I’m leading a team. My background is theatre, and I believe everybody is so important, whether it’s the prop people to the producers, the directors, everybody. So that’s why I’m about, it’s a team effort. That’s how I approach it.

AX: Would you say there’s any different kind of style to the comedy on AMERICAN HOUSEWIFE as opposed to MIKE & MOLLY?

MIXON: It’s single-camera instead of sitcom [multi-camera with a live audience]. That’s a whole ‘nother situation. [Single camera] is not like theatre. The sitcom situation is quite special, because you’re performing for two hundred people. And then this is just many, many hours of filming. And I’m embracing that, too. My background – I went to Carnegie-Mellon Conservatory in Pittsburgh, Pennsylvania, so my background is theatre. So [multi-camera] is like theatre in the round for me.

AX: Do you have input into Katie’s character, or other aspects of the show?

MIXON: They trust me. But I am really about what they need, what they want, what their vision is. But I also bring what I feel that needs to be brought to that character. So it’s been very special that they embrace that also. So there’s a humanity that I’ve got to bring to her that she has got to be slightly lovable.

AX: Does there have to be a balance between Katie getting a little more accepted by some of the neighbors without losing the basic premise of AMERICAN HOUSEWIFE?

MIXON: Completely. I think that what drew me to it was, she’s okay with not being perfect, and it’s okay whatever background you come from or what gender you are, to accept that you’re not going to get it perfect every time, but there’s nobody else like you in this world. So that’s powerful. She just marches to the beat of her own drum, and tomorrow’s a new day. That’s kind of her thing, and she goes back and forth with, she’s feeling not that skinny, she doesn’t feel real good in her body, and then there are other days where she’s like, “This is who I am, I’m gonna rock and roll.” So she feels that each day.

AX: Do you have any friends who have weight as an issue?

MIXON: I think everybody in life has specific people that they love and adore with a desire to lose weight, but truly, darlin’, I feel in my heart it doesn’t matter. Where I come from, it doesn’t matter, my background, whether you’re small or tall, large or big.

AX: Where are you from?

MIXON: Pensacola, Florida. It truly just doesn’t matter. Everybody deals with food. Everybody has a challenge with food. I love cuisine. So it’s all about moderation.

AX: How is it playing a parent of three?

MIXON: You know, honey, I just jumped in. I ended MIKE & MOLLY at the end of January 2016. Four days later, I walked into the AMERICAN HOUSEWIFE room. And so it’s crazy, it’s wild, but I just jumped into it. I wanted something very different to Victoria, the woman I had been playing.

AX: What is the fan reaction like to AMERICAN HOUSEWIFE?

MIXON: I could not be more grateful. It’s been a very, very special situation regarding the fans. They relate. Any time you play a character that someone relates to, it’s pretty special.

MIXON: I’m going to have a baby in May.

MIXON: My second baby. I only filmed the show pregnant. I don’t know what it’s like not to be pregnant [while making AMERICAN HOUSEWIFE].

AX: Are they writing around your pregnancy, or writing into it?

MIXON: They’re writing around it.

AX: Giving Katie four children might change things up a little too much right now …

MIXON: I know, right? She still has three.

AX: And what would you most like people to know about AMERICAN HOUSEWIFE?

MIXON: I think it is about accepting who you are, and there’s nobody else like you in this world, and that’s powerful. And it’s okay if you’re not perfect. Tomorrow’s a new day. She says it like it is, she doesn’t get it right every time, but she’s going to be her authentic self.