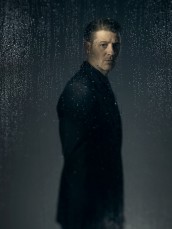 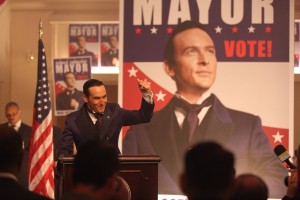 In Season 3 of GOTHAM, Mondays on Fox Network, Bruce Wayne (David Mazouz) discovers he has a lookalike with a very odd background, the heroic Jim Gordon (Ben McKenzie) has gone from being an upright police detective to a cranky bounty hunter and Oswald Cobblepot/the Penguin (Robin Lord Taylor) is running for mayor. Things in the city that will one day be Batman’s are decidedly odd.

ASSIGNMENT X: The subtitle for the first part of GOTHAM Season 3 is now “Mad City,” but it was originally “Heroes Will Fall.” You have some heroes who are so canonically tied into the adult Batman that, for example, unless you come up with a reason for somebody else named Jim Gordon to be running the future Gotham P.D., it seems like if he does fall, he has to rise up again …

KEN WOODRUFF: Well, there are a number of different ways in which a character can fall thematically, and we’re going to explore all of those. They can be physically injured, they can die, they can fall from grace, they can have moral falls, so we’re really looking at each hero that we have in our world, and exploring all the different ways how to do that. We talked about James Gordon’s fall. We also talked about Bruce Wayne digging himself deep into a hole in Season 3 and having to pull himself out of it morally.

AX: Batman has a deep, deep back shelf of bad guys in the DC Comics, but are you allowed to ever invent villains?

WOODRUFF: Oh, one hundred percent. We actually have a lot of fun, especially as writers, because every writer wants to create, and directors want to invent those characters and come up with the look and the style and the performance. I’m sure actors do as well. So we absolutely do, and you have a lot more leeway with those characters. If you invent them, you can do whatever you want with them. You can kill them, you can not kill them [laughs].

AX: Penguin has evolved over the seasons into an antihero, rather than a straight-up villain. Was that expected?

WOODRUFF: For me, personally? Not at all. And I think it’s a real testament to Robin’s acting. [Penguin is] able to do these horrific things, and yet the audience, and we as writers, still give him a pass. It’s unbelievable. Because [Taylor] really does bring a lot of empathy and heart to a villain, which I think just makes it so much more exciting to watch, and so much more entertaining. But it’s a real testament to him. I never would have expected it, honestly, looking at it on paper.

AX: Does Penguin count as a hero that will fall, or …?

WOODRUFF: No, I think he’s safely in the villain camp for us.

AX: It seems that Penguin and Edward Nygma, played by Cory Michael Smith, are mending their friendship …

WOODRUFF: One of the things we talked about, we planned for Season 3 was, Penguin was going to have this rise in the public life, and actually run for mayor. And one of the things that every mayor needs is a great right-hand man, a Number Two, a chief of staff. So we always had envisioned Nygma and Penguin, not [as] a ticket, but for the campaign. The two of them working together to solve problems, operating both on the public side and also on the underbelly side of Gotham has been really fun for us these last couple of episodes.

WOODRUFF: Yeah. I know everyone says this, but he is so much fun to write for. I still haven’t found anything that he can’t do. He really can play every single note on the range. And we’re really excited, and I know Michael’s really excited, by what we have planned for him this season, which is taking a hero and really showing a fall. There are different ways of doing that, like I said, but that’s one of the things I’m most excited about. It’s really taking him to a place and giving him scenes that he’s never played before on our show.

AX: There are a lot of series based on DC Comics right now, but GOTHAM is not tied into the four shows that are on the CW. Has DC ever mentioned that they’d like to weave anything else into GOTHAM?

WOODRUFF: We’re not tied in [to the CW shows] directly, but we are always in communication with representatives from DC. And what we want to do, what their goal is and what our goal is, is to make it feel like all of these shows exist in the same universe. So we have to play fair. If they show a character on one show, we have to show them in a different way, or we can’t show them on ours. So there’s a lot of discussion and talk about that, and we have the great people at DC to facilitate everything.

AX: For example, Ra’s Al Ghul is an important character in the Batman mythology, but he’s really heavy on screen, currently played by John Barrowman, on the CW shows …

WOODRUFF: Yeah. Off-limits for us for now [laughs]. But then they can’t have the Penguin, or the Riddler, and they can’t come to Gotham.

AX: How involved in Season 3 is GOTHAM creator Bruno Heller?

WOODRUFF: Bruno’s in the office every day. For the most part, he’s definitely the guiding force behind the show, but the day to day story-breaking and writing and everything falls on John Stephens and then to a lesser extent on myself and Robert Hull. But when Bruno’s around, he reads everything, he weighs in. Bruno brings a very distinct, unique take on material, and he definitely is continuing to do that on our show.

WOODRUFF: This is our third season together. We’ve always worked really closely – I’ve known John for eleven years, so we go way back. And I think we complement each other well. We are each other’s checks and balances. But yeah, John is the boss. I just try to make him happy.

AX: What would you most like people to know about Season 3 of GOTHAM?

This interview was conducted during Fox Network’s portion of the Television Critics Association 2016 summer press tour at the Beverly Hilton Hotel.