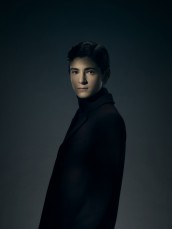 The actor talks about the hit Fox series 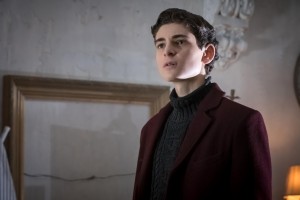 David Mazouz [pronounced Da-VEED Ma-ZOOZ] is now in his third season of playing the young Bruce Wayne on Fox Network’s GOTHAM, Mondays at 8 PM. For those who are somehow totally unfamiliar with DC Comics mythology, Bruce will grow up to be Batman. He’s already meeting youthful versions of his future adversaries, including Oswald Cobblepot/the Penguin (Robin Lord Taylor), Edward Nygman/the Riddler (Cory Michael Smith) and, perhaps most significantly, not-yet-Catwoman Selina Kyle (Camren Bicondova), a street-smart thief who is Bruce’s age.

This season, Mazouz is playing two roles – there’s Bruce, and then there’s an unworldly, pain-resistant copy of Bruce, created in a mad science experiment. Earlier this year, Mazouz costarred with Kevin Bacon and Radha Mitchell in the horror feature THE DARKNESS. A second film, INCARNATE, is due out in December.

One question that’s occurred to many GOTHAM viewers is when Bruce may become Batman. Mazouz shares his opinion on this, as well as other related issues.

ASSIGNMENT X: When you were on TOUCH playing Kiefer Sutherland’s son, the series creator Tim Kring expressed some concern about how to keep you looking like a child if the show continued …

MAZOUZ: Yeah, he’d always come up to me and say, “Stop growing” [laughs]. It’s funny, because I saw Kiefer when I was in New York. He was doing a tribute to Joel Schumacher in Long Island. I was a lot taller [than on TOUCH], and he said, “Thank God the show’s not going anymore, because it would be embarrassing for me to be following you around and running after you, because you’re almost my height now” [laughs].

AX: This season, you’re playing multiple characters – it’s not like multiple versions of Bruce, it’s completely different people who just all look like you …

MAZOUZ: No, I wasn’t surprised by it, for one very specific reason. Because that is who Batman is. Batman is unbreakable. He can take tremendous amounts of physical pain and it’s fine. It’s like it doesn’t even touch him. And that’s one of the distinguishing traits of Batman, and that’s what they were developing in that episode. It’s a wonderful thing that Season 2 really did for Bruce – every episode really showed another quality of Batman and his origin. For example, we all know Batman doesn’t kill. But we don’t really know, where does that come from, why doesn’t he kill? Why is it so wrong in his mind to end the life of another person? And we find out in Season 2, Episode Fourteen, it’s because he comes face to face Max Malone, the man who pulled the trigger that killed both of [Bruce’s] parents. And Bruce had the upper hand, and he didn’t get the satisfaction that he needed, and he realized that this guy was just a man, and that nobody is beyond redemption. And he was obsessing about that event for two years, and when he came face to face with that man, he didn’t get any satisfaction that he thought he would get. And it’s because of that that he doesn’t kill. Because in that moment, he realizes that nobody is beyond redemption. Everybody can be forgiven.

AX: And we also know that Batman is essentially alone. He’s got Alfred, who in this version is his guardian, played by Sean Pertwee, but he doesn’t really bond much with other people. Do you think that aloneness comes out of who Bruce is as we see him now, or do you think something else happens later on to really prevent him from bonding?

MAZOUZ: That’s a question for the writers, really – I don’t know what they’re planning to do with that specific aspect of Batman – but I think it would have to be something that happens later on. I think as of the beginning of Season 3, Bruce is a little distant and a little more cold to strangers than most kids would be, but he bonds with Alfred, and as you’ll see towards the middle of Season 3, you’ll see that he will care about somebody in a romantic sense. I think he doesn’t have that kind of problem with bonding that he does as Batman. I think that will be something that happens in the future.

AX: Is Bruce’s relationship with Selina going to get more complicated?

MAZOUZ: Always. I think the thing is, when Bruce first met her, he was fascinated by her. He’s been sheltered in Wayne Manor his entire life, and he meets somebody who’s from the other part of town, and he doesn’t know what that life is like, and he wants to know what that life is like. So he fascinated by it, and she’s the only person that he ever met that is from that side of the tracks. And so he needs her, because if he wants to figure out what life is like in the slums of Gotham, he needs her to take him there. But now going into Season 3, he’s had experiences in the slums, and he knows what the mobsters are like, and what the super-villains are like, and he’s had dangerous experiences. People have tried to kill him multiple times. Going into Season 3, he’s more independent. If he wants to make that connection to the other side of town, he doesn’t really need her for that any more. But through their bonding, they have a weird connection that makes Bruce like her. So their relationship will only get more complicated as the show goes on.

AX: Have you enjoyed getting to do more fight choreography as the show continues?

MAZOUZ: Yeah. I love it, I love it, I love it. I love it a lot. It’s great working with Sean, because he’s had the most extensive fight scenes on our show by far, besides Ben [McKenzie, who plays Detective Jim Gordon], obviously, who does three fight scenes every episode. But Sean has had very complicated fight scenes, and it’s great working so closely with him, because he teaches me a lot of things in general, about acting, and about being in the business, but especially about choreography, and with fighting. Bruce gets a lot more physical in Season 3. The very first fight scene I ever had in the show was Episode Fifteen of Season 2, so I went a long time without having a proper, choreographed fight scene. But Bruce is going to get a lot more physical this year, and it’s been so much fun to play that. It’s a little nerve-wracking, because I haven’t done it so much on GOTHAM, but it’s a lot of fun.

AX: What else can you say about GOTHAM Season 3?

MAZOUZ: A lot of things. New villains are coming to town – we have Mad Hatter, we have Poison Ivy, we have Killer Croc, Solomon Grundy – and the Court of Owls are the overarching bad guys of the season, and it’s great. You saw, by the end of Season 2, Bruce is the only person to realize their dangerous potential, and he’ll be very involved in the Court of Owls storyline. Another thing that I’m really excited to see is playing two characters. I’m really excited to see how those scenes play out, because it always feels really weird shooting them, when I have scenes with myself. It’s fun, and hopefully it will look okay [laughs]. But it feels very strange to do that. What else? Season 3, GOTHAM is going to get darker, GOTHAM is going to get more scary, GOTHAM is going to get deeper into what makes it necessary for Batman to exist.

This interview was conducted during Fox Network’s party for the summer 2016 Television Critics Association press tour at Soho House in West Hollywood, California.