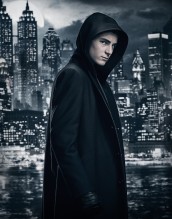 The actor talks about the recently renewed Fox series 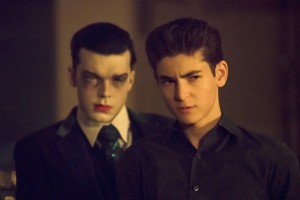 Fox Networks has just announced that its pre-Batman series GOTHAM will be back for a fifth and final season in the fall. Meanwhile, GOTHAM Season 4 is heading for an explosive finale on Thursday, May 17.

David Mazouz, who plays the adolescent Bruce Wayne, talks about where is character is at present, where he’s been and where he seems to be going.

ASSIGNMENT X: While Bruce Wayne is now fighting crime in Gotham while wearing a mask, and has even had visions of bats and his future self, he still has not actually become Batman this season …

AX: But Bruce is doing more finding stuff and getting physically involved, rather than just investigating and going, “How do we get the police to stop this?”

MAZOUZ: Yes, absolutely. And I think he’s learned that lesson. I think at the beginning of the season, he [hasn’t yet said] to himself, “The police can’t do this, I have to do this myself.” That’s later on. That’s what Batman sees. What Bruce sees is, “Listen, the city’s in trouble. An extra pair of hands on the street wouldn’t hurt.” And so he takes it upon himself, and he says, “I’m just going to help people who are in situations that I was in three years ago. I was a victim of a street mugging. I lost everything from that street mugging. People go through that every day. I can help stop that.” And he will. And also, he’s doing it because he wanted to have on-the-street training for when Ra’s al Ghul [Alexander Siddig] returned, because Ra’s al Ghul I think in a way is the center of this season, them going at it. They are the mortal enemies of each other. Ra’s al Ghul was trying to groom Bruce to become his heir, to become the monster that he wants him to be, and in order to do that, he was doing everything that hurts Bruce the most. It was mentally torturous, and the way Alex, who plays Ra’s al Ghul, put it, he twisted and twisted and twisted him, until he snapped. And Bruce did snap. Towards the middle of this season, [he was] on a downward spiral. He went somewhere really, really dark that we’ve never seen him before, where all of his relationships were severed, where he was hanging with a completely new crew of different people. He was really depressed, and it’s going to be really hard to bounce back. Obviously, he will, because he’ll have to become Batman, but when he does, he’ll never fully recover from that.

AX: Do you think Bruce’s descent and recovery this season is part of the explanation of why Batman is as wounded as we know him to be?

AX: What is Bruce’s relationship with Alfred, played by Sean Pertwee, at this point? He was horrendous to Alfred in the middle of the season, but they’ve pretty much made up …

MAZOUZ: Of course. We’ve all read the comics, we know eventually [Alfred is back working with Batman/Bruce], but it was a very rocky road back. I think the way that the writers have handled the breaking apart has been so brutal and has been so messy that Bruce’s clean-up had to be as strenuous and as effortful as possible. It took a lot of work from Bruce – he had to make a very convincing case to Alfred why he should come back, because as we all saw, he was amazingly awful to him. I mean, it was definitely something that I didn’t know Bruce was really that capable of, but we know that Bruce is full of surprises. 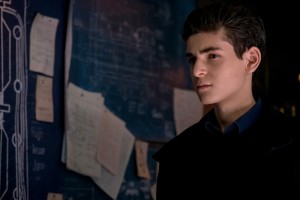 AX: Would you say that Bruce sees Alfred as a father figure, or more of a close friend?

MAZOUZ: I think they’re partners. Bruce Wayne is on the streets, with his mask on, fighting crime, and Alfred is the guy that he talks to in his earpiece, and who tells him where the enemy is coming from on the street. Alfred is the guy that patches up his wounds. Alfred is the guy that is his consultant. Alfred is a partner. They’re in this together. I think saying they’re in a father/son-esque relationship would kind of give the assumption that Alfred has some kind of control over Bruce, which is not true. Bruce does what he wants; Alfred is there to help him. And Alfred has realized that Bruce is going to do what he wants, regardless of what [Alfred] says, and so Alfred’s there to make whatever Bruce is going to do, regardless, as safe as possible.

AX: Is Bruce’s period of being amazingly awful part of what leads to him becoming so closed-off as an adult?

MAZOUZ: He definitely stops being so awful. It’s a very interesting point that you bring up, because I don’t actually know where the emotionally closed-off-ness comes from. I don’t know the answer. But I guess we’ll find out. I think that’s whole point of the show. We know where the characters end up, and we have to watch the show to figure out, connect the dots. How did they get from this point to that point?

AX: Did you enjoy playing Bruce when he was being awful?

MAZOUZ: Yes. Are you kidding? It’s so much fun. You ask any actor whether it’s more fun to play a villain or a hero, everyone’s going to say a villain, because there’s just more you can do. You don’t have to be likable. People hate you anyway. There are so many different things you can do with a villain. Being a hero is much more limited.

AX: Is there a Batman villain or a GOTHAM villain you would like to play, if you could take over from one of the regulars?

MAZOUZ: I would not want to play anybody else on GOTHAM, because I think everybody is doing an incredible job. I think the Riddler is a fascinating character, and I would love to take a crack at it, but never anywhere near Cory [Michael Smith, who plays the character], because I know I wouldn’t hold a candle to him. I’d like to just try the Joker, because I would just want to know if I could do it, or if I could even try to do it. But at the same time, I’d only do it behind closed doors. 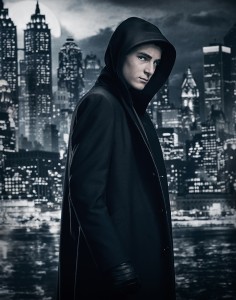 AX: Well, given that the Joker can show up as different people, maybe he takes on Bruce’s look for awhile, and impersonates him …

MAZOUZ: Yeah. I thought you were going to say, maybe if Bruce Wayne is the Joker the whole time. That would be a great twist, right?

AX: Have you gotten to do more physical stuff this year?

MAZOUZ: Absolutely. I feel like I’ve had three fight sequences every episode. Bruce is getting out there. He’s going on the streets and beating people up who are criminals, and so, yeah, he’s fighting.

AX: Do you have a particular style of fighting that you like?

MAZOUZ: I feel like Batman is a very technical fighter. He’s not showy, so there aren’t a lot of kicks. It’s a lot of hooks, a lot of things close to the chest. He lets his enemy come to him. It’s a unique fighting style, and it’s interesting, because there’s a stark contrast between the way Bruce fights, and the way Ra’s al Ghul fights, which is more flow-y and more martial art-y. There are so many different fighting styles on the show, which I really appreciate. Our stunt coordinators do a great job of giving each character a specific fight style throughout every fight sequence.

AX: And have you learned anything physical for this season that you’ve enjoyed getting to put into practice?

MAZOUZ: Yeah. There’s not one [specific] thing that I’ve learned – it’s just that I’ve been a lot more physical this year, especially at the beginning of the year, and so I just feel very physically in tune with my body, which is nice.

AX: Not asking for spoilers, but in what’s aired so far, do you have a favorite scene or episode from this season?

MAZOUZ: I think my favorite scene is the scene where Bruce goes out partying in the club, just because it was so ridiculously fun to shoot. The director, John Behring, was one of my favorite directors on the show. He directed probably one of the most emotional episodes for me, when Bruce meets Matches Malone [who killed Bruce’s father], in Season 2. He was just so cool. It was all one sequence, and it was detailed in the script, but he was, “Yeah, we’re using that as a template. What we’re going to do is, we’re just going to have fun.” So he just thought of different scenarios for me to do, and said, “Just let loose, have fun.” And that’s exactly what I did. He put me on top of the bar with champagne bottles, and I was just spraying everybody, pouring it into my mouth, hitting things with it, throwing things, and I could just do whatever I wanted. It was so much fun.

AX: You weren’t worried about hitting people with the bottles?

MAZOUZ: [joking] No. I’m reckless like that. I live on the edge.

AX: Were there any scenes you had trepidation about?

MAZOUZ: Yeah, absolutely. In the proto-Batman scenes, I had a lot of trepidation about it, especially ones where I had to use my voice. Because I know the Bat-voice is a big thing. But it turned out okay. It was a wise choice on behalf of Danny Cannon, who directed the first episode of this season.

AX: What would you most like people to know about the rest of GOTHAM Season 4?

MAZOUZ: In my opinion, it’s the best season of GOTHAM yet. It’s going to be the ultimate clash of good versus evil, of light versus dark.