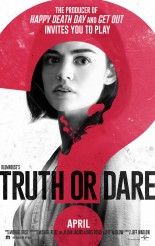 A good mixture of scares, thought-out mythology and sympathetic leads 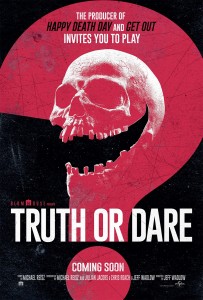 TRUTH OR DARE surprises on a lot of levels. For one thing, it’s that rare PG-13 horror flick that doesn’t seem to be pulling too many punches. Arguably almost as rare, it’s a teen-oriented story that doesn’t rely on its characters being idiots to keep the plot moving.

The game Truth or Dare may not seem the most promising premise for scares, but story deviser Michael Reisz and fellow screenwriters Jillian Jacobs & Christopher Roach & Jeff Wadlow – Wadlow also directs – have concocted mythology that works and has satisfying complications. More, we actually like these kids, feel some genuine stakes in their relationship and become invested in their quest to get out from under a really nasty, undeserved burden.

Civic-minded Olivia (Lucy Hale) is set to spend her spring break working for Habitat for Humanity, but her best friend Markie (Violett Beane) arranges things so that Olivia must instead join the college gang vacationing in Mexico. The group includes Markie’s boyfriend Lucas (Tyler Posey), amiable and gay Brad (Hayden Szeto), alcoholic Penelope (Sophia Ali) and her pre-med boyfriend Tyson (Noland Gerard Funk), and dense hanger-on Ronnie (Sam Lerner). When Olivia meets apparently sweet and thoughtful Carter (Landon Liboiron), he convinces her and her friends to accompany him to an abandoned church, where Carter then suggests they play Truth or Dare.

Things quickly get out of hand and the plot gets underway in earnest. Instead of spending a lot of time having Olivia et al dither about whether what they’re experiencing is real, they quickly accept some pretty convincing evidence that they are under a curse. One by one, they are forced to play Truth or Dare – any attempts to lie or refuse the dare result in almost instantaneous death. The survivors attempt to protect each other and themselves while trying to get to the bottom of exactly what is happening and whether it’s possible to stop it.

In its somewhat baroque scenarios for lethal peril, TRUTH OR DARE bears some resemblance to both the RING and FINAL DESTINATION franchises. However, TRUTH OR DARE positions itself so that there is strategy involved – we’re not just marking time between kills. The game also advances the plot by giving most of the revelations (the “truths” and sometimes the “dares” as well) social and psychological resonance that furthers the action. 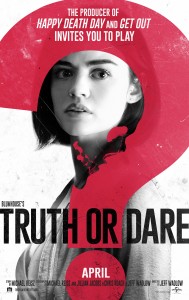 The casting is shrewd, in that most of the leads are veterans of TV melodrama, TV supernatural shows or both (Hale is from PRETTY LITTLE LIARS, Posey was the lead in TEEN WOLF, Beane is on THE FLASH, etc.). They’ve got a lot of practice in handling this kind of material and do it proficiently. Tom Choi does a very good job as Brad’s straight-laced father, who does his best, but misunderstands exactly what’s going on with his son.

The dialogue occasionally melts into premium cheese, there’s some undue hysteria around romantic crushes long after everybody has bigger things to worry about, and exactly where the line is drawn regarding alcoholism is a bit sketchy (only one character is considered by the others to have a drinking problem, when most of them are inebriated a lot of the time). Still, TRUTH OR DARE is overall clever, fun and has a smart twist ending. As this kind of pop horror goes, it’s truthfully one of the better ones to come along in awhile.