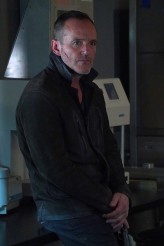 Comments Off on MARVEL’S AGENTS OF SHIELD: Clark Gregg gives the low down on Season 5 – exclusive interview 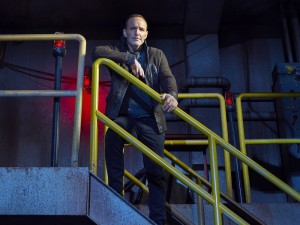 In Season 5 of MARVEL’S AGENTS OF SHIELD, Friday nights on ABC, our heroes have returned to the present from the future, but at possibly great cost. It looks like the agents’ leader Phil Coulson, played by Clark Gregg, may lose his life in the series’ 100th episode, reported to be a game-changer.

Prolific actor Gregg has played Coulson off and on in feature films since 2008’s IRON MAN. The character was killed in 2012’s THE AVENGERS, but was alive again when MARVEL’S AGENTS OF SHIELD premiered in 2013, a revival eventually revealed to have been engineered with painful alien technology that almost drove Coulson mad before its purpose was known.

Coulson and the S.H.I.E.L.D. team have tangled with aliens often since then, especially when most of them got trapped in a dystopian off-world future. This did allow Gregg, who had already helmed the feature films CHOKE and TRUST ME (he also acted in both), to direct his first MARVEL’S AGENTS OF SHIELD episode, “Fun & Games,” earlier this season. With the supercilious blue Kree species in charge and man-eating giant bugs called “roaches” threatening everyone in sight, the first part of Season 5 has been unlike anything done on the show previously.

ASSIGNMENT X: What did the first part of Season 5 seem like to you, sort of a combination of ALIENS and GUARDIANS OF THE GALAXY, or how would you describe it?

CLARK GREGG: Yeah, those are good starting places. Sometimes it feels a little TREK-y. But this is just the first [ten] or seven episodes. If it’s anything like last season, they’ll completely tear it apart and reboot it two or three more times.

GREGG: Framework one [where Coulson’s consciousness was trapped in an artificial-intelligence universe where he thought he was a schoolteacher]. Have there been any besides that? The rest of them have just been Phil. I would say that there have been two versions of Phil, the one who knew he’d been killed and the one who didn’t, and knew that his memories had been restored. But still, that’s just all one guy.

AX: Do you have a special fondness for the LMD or the Framework versions?

GREGG: I have no connection to the LMD. That guy was ruthless, but it was fun to play. I did like playing Framework Phil, who got to kind of be a nerd who made his own soap, who had conspiracy theories that have turned out to be true.

AX: When you directed an episode of MARVEL’S AGENTS OF SHIELD earlier in the season, was there any “Good grief, how do I do this?”

GREGG: Yeah, there was healthy “Good grief, how do I do this – how do I keep up what they’re doing?” Which I think is pretty great and, “How do I keep what I do in the tone of the show?”

AX: Is it difficult to direct yourself? You’ve done it in the features you’ve directed …

AX: And here you had the roaches …

GREGG: Exactly. You could get taken out at any moment.

AX: Well, just in terms of practical special effects on set and making room for the CGI to be added later …

AX: Do you have any more input into Phil now than you did in the beginning, or do you not want to do that?

GREGG: We have conversations. But we’re pretty in synch with where we want to go. They [the writers] come up with the story, and every once in awhile, I’ll have an idea about how Phil Coulson might be feeling about this, or want to proceed, but they’ve got it pretty dialed in at this point.

GREGG: I did a little indie this summer called SPINNING MAN with Minnie Driver, Pierce Brosnan and Guy Pearce that’s coming out pretty soon, I’m told, and nothing else I can divulge at this moment.

AX: And what would you most like people to know about Season 5 of MARVEL’S AGENTS OF SHIELD?

GREGG: It’s our best season yet. They should tune in.