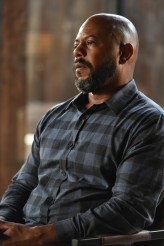 The actor also discusses his role in PRISON BREAK 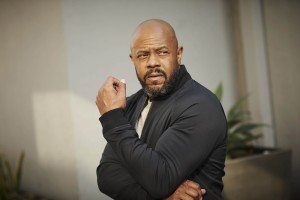 On Fox Network’s 9-1-1, currently in its first season on Wednesday nights and already renewed for a second, we follow police officers and firefighters and the emergency call center that tells them where the newest crisis is happening.

Rockmond Dunbar’s character Michael Grant is not a firefighter or a cop or even a 9-1-1 operator. Michael is married to police officer Athena Grant, played by Angela Bassett, who is also one of 9-1-1’s executive producers. The marriage is under some strain, to put it mildly. Michael has just come out relatively late in life as gay and is in a relationship. As if that’s not enough, Michael and Athena’s teen daughter May (Corinne Massiah) has attempted suicide and young son Harry (Marcanthonee Reis) doesn’t know what to make of the family situation.

Dunbar is well-known to Fox viewers for playing Benjamin Miles “C-Note” Franklin on PRISON BREAK, a character he reprised on last year’s limited revival. The Berkeley native has also had regular and recurring roles in SCORPION, THE PATH, THE MENTALIST, THE GAME, TERRIERS, SOUL FOOD and EARTH 2, as well as appearing in feature films including KISS KISS BANG BANG and HIGHLAND PARK. Dunbar is also a writer/producer/director who made the feature film PASTOR BROWN and the documentary THE GREAT COMMISSION.

ASSIGNMENT X: You’re often cast in action roles. There’s a lot of punching and shooting on 9-1-1, but Michael isn’t involved in any of it. Do you feel at all left out?

ROCKMOND DUNBAR: [laughs] No. Not at all. But I do get slapped around quite a lot by Ms. Angela Bassett there, and you know what? I take those hits well. They feel good, actually. They look horrible, but they feel good, because they’re coming from Angela Bassett.

AX: It seems like the relationship between Michael and Athena is somewhat fraught …

DUNBAR: “Fraught?” It’s amazing in every way. It’s complicated. It’s uplifting. It’s a downer. It’s a mixed-orientation marriage. I believe our relationship is a reflection of America today, adults getting to an age where they’re trying to figure out who they are because they didn’t do the work before, and we’re watching that unfold before our eyes, and I think it’s beautiful.

AX: Michael obviously isn’t a first responder. What does he do professionally?

DUNBAR: I’m an architect. Unless they change it [laughs].

AX: Did you do any research into being an architect?

AX: Was there anything you did have to research for 9-1-1?

DUNBAR: Yeah, coming out at a late age. I talked to a few friends – my friend Chris gave me the law of the land in how everything really goes and what to expect, and how it happened within his situation, and I tapped into that a little bit and regurgitated it.

AX: How is it playing a father of two children, at least one of whom is very unnerved?

DUNBAR: You know what? I’m a dad of three, sometimes my kids can be a little unnerved. I know how it is, I’m in the trenches right now, I have three kids under the age of four, so yeah, you can only imagine the stresses and everything that goes with that. I’m super-excited, and the kids are so great, they’re such good actors. It’s so nice to work with kids that are good actors.

AX: You had worked with 9-1-1 co-creator/executive producer Tim Minear before on TERRIERS …

DUNBAR: Tim is such a great writer, and it’s amazing to actually circle back and end up with him again and be in a position where we can create and make beautiful music, so I love his writing.

AX: There are rumors that PRISON BREAK may come back again. Do you know anything about that?

DUNBAR: I’ve heard the rumblings. But you know what? I heard the rumblings when we were in Morocco shooting, like, “Hey, you know what, we’re going to have to do this again,” and we’re already talking about it. Is [PRISON BREAK creator] Paul Scheuring involved? Yeah, Paul is thinking of all these ideas of how we can have it, and now I’m hearing again the rumblings coming back. I’m in. I will be craft service. I just love working with those guys. Totally, totally excited if it comes back, and I’m one hundred and fifty percent, even if they’re shooting it in [a less-than-enjoyable location], I’ll be there.

DUNBAR: STOLEN BITES: THE EAST BAY DRAGONS STORY. Basically, I grew up with one of the first all-black, all-Harley motorcycle clubs in the East Bay. My wife Maya Dunbar just finished the first draft of the script, and we just budgeted it, we had the budget printed out and we’re building a team right now, so we’re looking to solidify our budget this year and start shooting this year.

AX: And what would you most like people to know about 9-1-1?

DUNBAR: You have to stay tuned, because this show is going to take so many different turns and twists that you don’t want to miss an episode.