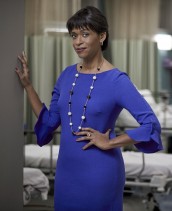 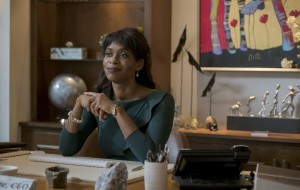 THE RESIDENT, now in its first year Monday nights on Fox, is a different kind of medical show. It starts out with one of its main characters, Bruce Greenwood’s top surgeon Randolph Bell, covering up his patient-killing operating room mistake. While there are plenty of ethical doctors and nurses around (played by Emily VanCamp, Manish Dayal and Shaunette Renee Wilson, among others), THE RESIDENT also gets into a subject most other shows in the genre avoid like the plague: medical bills.

Merrin Dungey (the “g” is soft) plays hospital CEO Claire Thorpe, whose job it is to maximize profits. Dungey, originally from Sacramento, California, played both the helpful Francie Calfo and her evil doppelganger Allison Doren on ALIAS. Dungey has also been a regular on THE KING OF QUEENS, HOLLYWOOD HEIGHTS, CHASING LIFE, CONVICTION, and BIG LITTLE LIES, and worked with fellow THE RESIDENT regular VanCamp in multiple episodes of REVENGE.

During a discussion of THE RESIDENT, Dungey also reflects on the fun she had in her recurring role as the sea witch Ursula in ONCE UPON A TIME.

ASSIGNMENT X: It sounds like Claire Thorpe may be a somewhat antagonistic character …

AX: Did you have to learn anything in order to play Claire?

DUNGEY: I had to learn a little bit more about how hospitals run, and to get the knowledge that there is this bottom line, and how much information she was giving about the CTs and things that cost more money. It’s an overriding idea that you think that hospitals are just there because of a life-and-death situation, and that’s not true. It’s a business.

AX: Did you learn anything you found especially interesting?

DUNGEY: Oh, absolutely. I had no idea what a moneymaker it really was. You just don’t think of hospitals in that respect. You think of it as a place to take your family or your child or your husband or your wife to save their lives. You don’t think about the fact that they would rather give you a CT than an x-ray.

AX: Did you have to learn any tongue-twisting terminology?

DUNGEY: Not really, no. I mean, everyone’s had to say things like “parathyroidectomy” and things like that, but I would get one or two. I wouldn’t have to also insert a line in someone’s vein and have that happen at the same time.

AX: Who does Claire go head to head with most?

DUNGEY: I suppose it would be Conrad [the upright doctor played by Matt Czuchry]. I go head to head with him most, and then I work in conjunction with Dr. Bell.

AX: Does Claire have any idea of what’s going on with Dr. Bell in terms of his duplicity?

DUNGEY: No, she doesn’t.

AX: Does it help the work environment on THE RESIDENT that the creators – Amy Holden Jones, Hayley Schore, and Roshan Sethi – are sticking around as executive producers, because sometimes creators create a show but the EPs are different?

DUNGEY: Of course. They’re not always in Atlanta with us, but it’s nice to have them. It’s the singular vision. And also, coming off a show from last year where you’re in the fall launch, the midseason is so much better, because you do get this chance to build this world without the pressure of [a fall premiere]. I think that’s why things on HBO and Netflix, you get a chance to breathe and do your work and not have the judgment coming down.

AX: You joined THE RESIDENT after the pilot. Was that because Claire doesn’t show up until later, or the writers created the character later?

DUNGEY: Yeah. I believe they didn’t have a CEO. There were other things that were happening in the script, and then they decided to bring that part into the story. I’m not sure, because I wasn’t there. I just know that when I got the call, I got the call.

AX: Is Claire a snappy dresser? Do you enjoy her wardrobe?

DUNGEY: Oh, my God, absolutely. She’s the CEO. She gets the best clothes. I’ve run the gamut of incredible outfits and things. I remember when my character went dark on ALIAS, all of a sudden, I could wear leather, I could wear black. It was very exciting [laughs].

AX: Well, you’ve had some very interesting clothes. You were in ONCE UPON A TIME as Ursula …

DUNGEY: That’s very true. It was one of the most exciting times of my career. To get to dress up and work with those wonderful women and be as evil as it gets, do CGI – the whole thing was a dream come true.

AX: At least on television, you’ve gotten to play a number of openly antagonistic people and morally ambiguous people. Are those parts more fun?

DUNGEY: I’ve played my share of goodie-goodies and best friends and wives as well. But when you get something to play, when you just get something delicious to chew on, it’s much more exciting.

DUNGEY: Well, they did announce BIG LITTLE LIES 2. We’ll see what happens there.

AX: And what would you most like people to know about THE RESIDENT?

DUNGEY: That it’s a side of the hospital drama that you’ve never seen before.