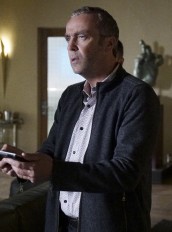 The duo talk artificial intelligence, being Scotsmen in Los Angeles and more 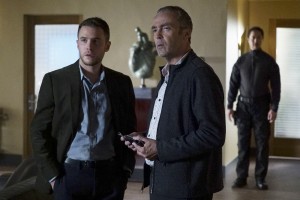 It’s rare for an American show to have two Scottish actors as regulars both playing Scottish characters. However, MARVEL’S AGENTS OF SHIELD, now in its fourth season Tuesday nights on ABC, boasts Iain De Caestecker as Dr. Leopold Fitz and John Hannah as Dr. Holden Radcliffe.

De Caestecker has been with AGENTS OF SHIELD since its premiere. His Fitz is a tech genius whose adoration of erstwhile classmate, biological whiz Dr. Gemma Simmons, played by Elizabeth Henstridge, is now requited. Hannah joined the series in Season 3 as Dr. Holden Radcliffe, a pioneer in the field of artificial intelligence.

Until recently, Fitz looked up to Radcliffe and even helped the other scientist conceal the existence of the human-like A.I. Aida, played by Mallory Jansen. However, since it’s been discovered out that Radcliffe was spying for the anti-S.H.I.E.L.D. Senator Ellen Nadeer (Parminder Nagra), made an A.I. duplicate of himself and another A.I. duplicate of S.H.I.E.L.D. Agent Melinda May (Ming-Na Wen), it can be said that the relationship between Fitz and Radcliffe is now in a cooling phase.

Radcliffe would argue that he’s just trying to help humanity with his A.I. research, and even with his quest for the book of extraterrestrial lore known as the Darkhold.

De Caestecker and Hannah are seated near one another during a set visit arranged by Marvel for the Television Critics Association (TCA) press tour. It is thus possible to speak with both actors at once.

ASSIGNMENT X: As you’re both Scotsmen, do you get caught up culturally or dialectically when you have scenes together?

IAIN DE CAESTECKER: Maybe, probably we do. We don’t think we do, but yeah. It’s definitely a big plus, bonus for me, having another Scot on the show, and someone as cool as John Hannah. So, yeah. We often will talk about stuff back in Scotland people won’t understand. You do need to catch yourself sometimes, so [non-Scottish] people can still understand what you’re saying.

AX: Do you ever make suggestions as to things that your characters can banter about?

JOHN HANNAH: Yeah. Also, within the kind of scientific blah, blah in the background. But then, he’s been doing it for four years, so I just take my lead from him. I let him do it [laughs].

AX: Do you feel there is, or at least has been until recently, a mentor/pupil relationship between your characters, and does it go both ways, because one of them has expertise that the other doesn’t and vice-versa?

DE CAESTECKER: Yeah, I think so. I think probably Fitz looks up to Radcliffe a little bit more than the other way round, but yeah, there’s probably a mutual appreciation there.

HANNAH: Essentially, they get in terms of what [series co-creator/executive producer] Jed [Whedon] was saying there about Radcliffe essentially being a character who wants to be liked – he has worked solo for quite a long time, and the things that we find out about the connections in the scientific community, especially in a country like Scotland, would be quite small, so there are connections there that feed into a relationship beyond two actors meeting and working.

HANNAH: Well, interestingly, we have a philosophical discussion at one point about what the difference is between A.I which has self-knowledge and humanity, so there is a scene there where we discuss that. The idea of artificial intelligence has been around for such a long time now, and it’s something which is still very much seen as a kind of holy grail, but one that in the real world I think we’re very close to. I think people are talking about a singularity [self-aware artificial intelligence] within the next two decades, so I think it’s been interesting to research around the areas of a show like this, to find yourself involved in a discussion of the ethics of artificial intelligence and what humanity is. I think we’re seeing it. It’s interesting to bring those elements into a show like a Marvel show.

AX: Do either or both of you have strong opinions about artificial intelligence in real life, and if so, how do they resemble the opinions of your characters?

DE CAESTECKER: It’s interesting. I probably don’t know enough about it as my character would. But also I’m quite wary, I’m cautious of it as well.

HANNAH: I think there’s a definite evolution about artificial intelligence. There’s an interesting writer called Ray Kurzweil who I’ve been reading during this period who talks about the singularity, that it’s part of human evolution, that we will at some point cross over into – well, we already have trans-humans, so artificial intelligence is not far off at all. Like anything, it’s about who controls it, who’s got their finger on the buttons.

AX: Fitz experienced brain damage in Season 2 and we saw the effects of that for quite awhile, but he seems to have largely recovered. Are you keeping any of that damage in the performance at all?

DE CAESTECKER: Yeah, we spoke about that a lot. Coming out the other side, Fitz is very different from the character that he was before he had the brain damage. There are still probably moments of it there. He’s able to function much more normally now, but yeah, there are ways that he’s found, different ways around obstacles that he maybe would have handled in a different way before. There are maybe small little bits that are in there if you encounter them, but otherwise, it’s not something that has been carried on too much in the scripts, as big a theme as it was. But yeah, it’s still there, and it’s still something that’s referenced, I think, now and then.

AX: Given that romances on AGENTS OF SHIELD often end tragically, were you worried that once Fitz and Simmons got together, either you or Elizabeth Henstridge would immediately be out of a job?

DE CAESTECKER: Well, maybe we still will be. Who knows?

AX: You were on SPARTACUS for three seasons, where you were dealing with a very particular CGI environment. Is working with the CGI on AGENTS OF SHIELD at all similar to that, or is it a completely different context?

HANNAH: It’s all very similar. It’s all theatre. It’s all this [gestures at set], and this is what we deal with. Like SPARTACUS, the sets that the audience see at the end seem very real, and you take that on board, and you know that it’s fake, and you walk out and have a coffee and stuff, but you deal in that moment of reality. That’s what you try and do.

AX: Fitz has gotten to invent quite a few cool things. Was there something you particularly enjoyed playing the invention of?

DE CAESTECKER: The drones have always been pretty cool, the little droids, they were always a pretty cool tool, but probably Coulson’s hand is a pretty cool one. I don’t get to play with it, but I get a kick out of him using him.

AX: Do you ever go up to Clark Gregg and say, “Give me that back”?

DE CAESTECKER: All the time, every day.

AX: Do you think Radcliffe sees himself as a good guy?

HANNAH: He’s a scientist. I don’t think he judges himself in [that] sense. I think he’d probably think he’s a good guy. He’s not doing anything bad at all. He’s simply pursuing science for its own sake, and as I said, it’s what gets done with that and who’s in control of it, which is the same conversation we’re having. I mean, Trump’s already talking about upping the nuclear arms race again. We’ve spent forty years, fifty years, with that in place, which has made the world in spite of everything a safer place for many, many people. It’s a worry.

AX: Feel free to not answer this, but how do you as Scotsmen feel about being in the U.S. at this extremely bizarre time?

DE CAESTECKER: I didn’t get the opportunity to vote. It’s bizarre, but there are also a lot of bizarre things going on in the U.K. But just in the sense, in a way when you first come over anyway, just the cultures are quite different, so I’m still kind of getting used to the culture. We’re in L.A., which I think is a bit of a bubble in itself. I shouldn’t really comment on it.

HANNAH: Well, it is a bubble, but at the same time, I do worry that Britain as well as America is headed for a slow-motion train wreck with the people who are in charge of the buttons – things that are being said. It’s interesting. I wish it wasn’t quite so interesting, but it is interesting. Who was that Chinese philosopher who said, “May you live through boring times”? [laughs] Not that it was exactly boring before Trump, but it certainly ups the ante a little bit, doesn’t it. A lot of people I think are very, very anxious about what’s going to happen, and that’s a shame.

AX: Does it sort of feel comforting to work on narratives like AGENTS OF SHIELD, where there are powerful villains, but usually some kind of solution for dealing with them?

HANNAH: Unfortunately, no, because the machinations of the story are always more or less worked out for the good guys. As a kid, I used to respond to the films and the TV shows where the bad guys actually got away with it a little bit, because it felt more real. And I think the bad guys get away with it pretty often [in real life].

AX: What would you most like people to know about the rest of Season 4?

DE CAESTECKER: That it’s going to be well worth watching.

HANNAH: It looks phenomenal, it’s amazing. These writers continually surprise and amaze us, the actors, and hopefully that translates for an audience watching it also.