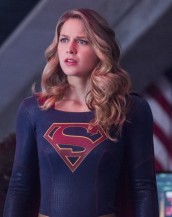 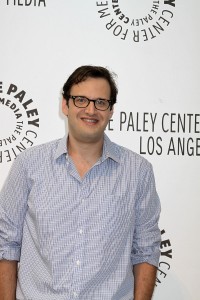 SUPERGIRL is now on Monday nights on the CW in its second season (its first season was on sibling network CBS). Melissa Benoist has received galactic acclaim as the young woman of steel. This season, she’s been joined by a few more family members from her home planet. Chris Wood plays Mon-El, and Tyler Hoechlin, lately of TEEN WOLF, has appeared and may yet be back as Kal-El, aka Clark Kent, aka Superman.

Andrew Kreisberg, who co-created and executive-produces SUPERGIRL (and its CW DC Comics siblings, ARROW, THE FLASH and LEGENDS OF TOMORROW) talks about these developments.

ASSIGNMENT X: Did you have any thoughts about withholding what was in the pod – that is, Kryptonian Mon-El, played by Chris Wood – that was shown at the end of Season 1 for longer than you did?

ANDREW KREISBERG: It gets revealed in the first minute of the season premiere, and we’re going to be outside shooting, and people are going to find out. It’s not like the old days, where you could actually hide who shot J.R. [laughs]. Now, with media saturation, and the exposure the show has, and the interest that the shows have, and photographers, it just felt like it wouldn’t be a secret that would hold.

AX: Did you know what was in the pod when you wrote the season finale?

KREISBERG: [laughs] Yeah, we did. We always knew that this is where we were heading.

AX: Did you have fun writing for Superman, played by Tyler Hoechlin, and Jimmy Olsen, played by Mehcad Brooks, and Superman and Cat Grant, played by Calista Flockhart?

KREISBERG: Oh, yeah. We established that Jimmy and Clark are best friends, so that easygoing best friends camaraderie is part of the episodes, and one of the fun bits that happens in the show is, Cat’s a little smitten with Clark. I mean, I don’t know who would not be smitten with Tyler, but it’s sort of a different color for Cat, and it’s fun to see Clark actually use it to his advantage.

AX: If Superman does prove to be a popular character on SUPERGIRL, how do you prevent him from overshadowing Supergirl, because it will remain her show …

KREISBERG: The point of the episodes is that we embrace the idea that he’s the more popular figure, and it’s a bit of fun with her having to deal with [that], as with any one of us who had a very famous cousin, who is like a movie star or a football player, and you’re used to just seeing your family member, but everyone else treats them with a level of reverence that you think is a little bit over the top. So rather than shying away from it, we’re embracing it.

AX: How did you decide on Tyler Hoechlin as Superman?

KREISBERG: He is Superman. He walked in and he sat down, and I’ve known him for years, between ROAD TO PERDITION and EVERYBODY WANTS SOME, which is one of my favorite movies [laughs], so good, but he just looks like Superman. But in addition, he’s a really sweet, nice guy. I mean, he genuinely is. So when you’re sitting down, when we sat down to talk to him about it, there was nobody else, because he embodied everything that you want in Superman – strength, kindness, soulfulness. And right off the bat, just sitting down with him, he was attracted to all of what I call the quiet moments. Because the spectacle is always great, and we love the flying and the explosions and the heat vision and all, but it’s always the quiet moments that are the things that you remember, and it’s why the Richard Donner movie has stood the test of time, because the quiet moments still resonate, even if the visual effects are a generation behind. 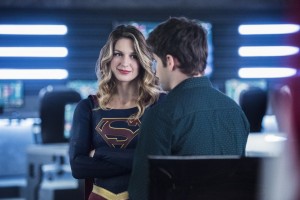 AX: Did you consider using the John Williams SUPERMAN theme when he first showed up?

KREISBERG: That’s John Williams’ music. And this is our Superman. We’re writing a theme for him that’s us, because it’s our version of our show. Our Supergirl, our Superman, aren’t tied into any other version. It’s not an adaptation – it’s not a continuation of the Chris Reeve movies, and it’s not a tie-in to the Zack Snyder-verse. It’s its own thing.

AX: Can you talk about casting the ‘70s TV Wonder Woman, Lynda Carter, as the U.S. President?

KREISBERG: We actually wanted her as the president in the season finale, and we unfortunately couldn’t work out Lynda’s dates. So we wrote her out, because we really wanted Lynda Carter to play the president. So we just decided we would wait a little bit, and we’re so glad it worked out, we’re so excited to have her on. We have a long tradition of having people like Dean Cain [Clark Kent/Superman from LOIS AND CLARK, who plays Supergirl’s adoptive father in SUPERGIRL] and John Wesley Shipp [the ‘90s TV Flash, who plays Barry Allen’s father and the Earth 3 Flash on THE FLASH], people who’ve formerly portrayed superheroes on the shows, and we’re glad to continue that tradition.