The executive producers/co-creators talk about the new season 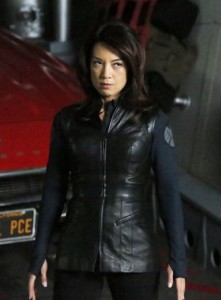 As is often the case, all hell is breaking loose on AGENTS OF SHIELD, Tuesday nights on ABC. As the fourth season ramps up toward its finale, Daisy Johnson (Chloe Bennet) and Jemma Simmons (Elizabeth Henstridge) are trapped in the computer-created artificial world of the Framework, along with virtually everyone they know. The difference is that Daisy and Jemma remember who they are in the real world. Phil Coulson (Clark Gregg), top S.H.I.E.L.D. agent and former director of the organization, thinks he’s a high school teacher who’s new to espionage. S.H.I.E.L.D. director Jeffrey Mace (Jason O’Mara) has just been murdered in the Framework, causing his real-world death. Dedicated S.H.I.E.L.D. agents Melinda May (Ming-Na Wen) and Leo Fitz (Iain De Caestecker) are, in the Framework, dedicated agents of the malevolent HYDRA, which is in charge of the government in the alternate universe. Also, real-world HYDRA agent Grant Ward (Brett Dalton), killed last season by Coulson, then taken over by the villainous Hive and exploded in space, is alive and well in the Framework, where he is a trustworthy S.H.I.E.L.D. agent – something Daisy and Jemma are still trying to process.

AGENTS OF SHIELD executive producers Maurissa Tancharoen and Jed Whedon, two-thirds of the team who created the series (with Joss Whedon) based on the Marvel Comics universe, take some time to talk about where the show has been and, in non-spoilery terms, where it’s going.

ASSIGNMENT X: With Season 3, when in the life of AGENTS OF SHIELD did you know that’s how you were going to end Season 3, with the deaths of Hive/Ward and Lincoln, played by Luke Mitchell, and the alienation of Daisy?

AX: Did removing Coulson as Director of S.H.I.E.L.D. and putting him in the field at the start of Season 4 come about because Clark Gregg came to you and said, “Please let me run around in the street some more,” or …?

WHEDON: That’s precisely it. He said, “I’m sick of these clothes, I’m sick of this office, I want to get out there and stretch my legs.” No, we try every year to change the dynamic and mix things up and pair people with new people, and with the meeting with the [U.S.] President last year and moving towards legitimacy, we thought it would be a fun dynamic to shake up, that he gets some of his powers stripped from him. 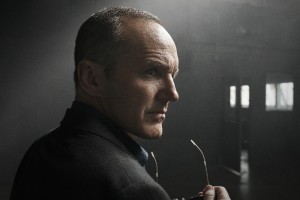 AX: Are we going to be seeing more of Adrian Pasdar as General Talbot this year?

WHEDON: We’re such big fans, and it’s definitely in our list of things that we want to do.

TANCHAROEN: He is on our wish list. Whether or not he’s available is always a question, but we’re always wanting Talbot on the show.

AX: Did you initially stick Hive into Ward to change up what the actor was doing?

TANCHAROEN: It’s not necessarily that we wanted to change up what Brett was doing. It is a testament to how we know he can absolutely do anything. And also, just to be able to sustain an antagonist for that long, we sort of were doing another iteration of who he could possibly be as our antagonist. 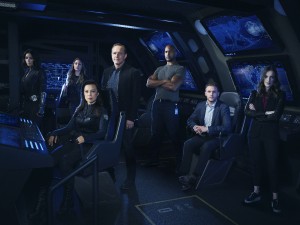 AX: Without getting too spoilery, are the plots of Season 4 all from the comics, or something from within your internal development?

WHEDON: It’s all from the comics, I’d say, but as always, there’s our own little spin on it.

AX: Should we be worried that any of the Inhuman-making genes have floated down to Earth, or is that storyline over for now?

WHEDON: We tried to definitively end some stuff last year. We wanted to sort of end the Inhuman Genesis chapter. They’ve been our antagonists and our presenting mission for awhile, so we wanted to move on to new stuff. That doesn’t mean that it’s not still in the mix.

TANCHAROEN: Yeah. It doesn’t mean that Inhumans are not out there.

WHEDON: They’re definitely in our world.

TANCHAROEN: And we do have a faction of Inhumans that we can call upon if we need them.

AX: What were you happiest about in Season 3, and what was the hardest thing in Season 3?

WHEDON: We were very happy with all the performances at the end. It was a bit of a puzzle. We painted ourselves into a corner with the flash-forward of that final moment, and we knew how we wanted it to feel, and we knew how we wanted the poetry of the moment to feel, and I think that between all the writers sort of [working] up the story and the actors’ performances leading up to that moment, I think we were really satisfied with how the plane landed at the end.

AX: And what was the hardest?

WHEDON: The hardest part? Probably painting ourselves out of that corner [laughs].

TANCHAROEN: Well, the hardest part was saying goodbye to Luke Mitchell and Brett Dalton [although he’s now temporarily back as Ward in the Framework]. Brett Dalton been with us since Day One, the first day of the pilot, and again, not to repeat myself, but just to sustain him as an antagonist as long as we have, that just goes to show how much we value his work and we value what he brought to the character. But it was very hard to say goodbye to both of those actors, and those characters. But story-wise, we felt that it served the purpose that we intended. 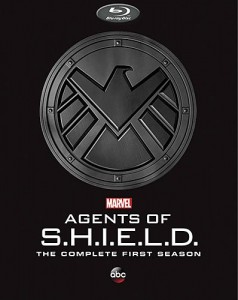 AX: Are we going to circle back to the Ghost Rider mythology and find out who it is that he talked to that he thought was the Devil, or because they don’t really reveal that in GHOST RIDER, we can’t answer it here?

WHEDON: We just might see some more Ghost Rider, and how much we learn, you’ll have to wait and see.

AX: Would it be Ghost Rider in the person of Robbie Reyes as played by Gabriel Luna, or Ghost Rider as an entity?

TANCHAROEN: That is a good question.

WHEDON: Mayhap the return of our friend Robbie Reyes.

TANCHAROEN: That chapter is not closed.

AX: Did you feel the need to have Coulson definitively say he thought we’d see Ghost Rider again to forestall a real-world campaign to bring him back?

WHEDON: Yeah. We also like the idea that you reveal that Coulson’s like, “Oh, this is my first Ghost Rider,” because he always knows everything, so we like that idea. But yeah, I think we pretty definitively said, “Don’t worry, there’s more.”

AX: With May, you had Ming-Na Wen play her as an artificial-intelligence Life Model Decoy earlier this season, and the Framework version of May is different from the “normal” version. You’ve had Wen play different versions of May before. Does that character just lends herself to that, or is there something about Wen as an actress where you go, “Oh, let’s have her play this other thing”?

TANCHAROEN: Well, she is a beloved character, so of course, as [Marvel Vice-President of Television Jeph] Loeb was saying earlier, someone who the audience has grown a relationship with and has an emotional attachment to, of course we take that and flip it on its head. There’s also the thing of people always saying that May is very close to being a robot anyway, so maybe that was the connection there [laughs].

AX: With Iain De Caestecker as Leo Fitz and John Hannah as Holden Radcliffe, you’re the only American TV show I can think of that has two Scottish series regulars playing two Scottish scientists. Was that ever part of your strategy, and do you ever go to them and say, “What would Scottish banter be like?” And do you ever have to say, “Tone the accent down, or we’ll have to subtitle you”?

TANCHAROEN: We’ve had the note of, “We need to understand you a bit more clearly,” but other than that, no. It was just sort of an organic thing that happened.

WHEDON: They’ll tell us occasionally when we write something, like in one episode, I think in Episode One, he comes in and says, they’re going to watch a football match, “They’re just taking the field,” and they were like, “Ah, it would be the pitch.” We’re like, “Okay.” So they do correct us occasionally, but in terms of them both being Scottish, we just liked John Hannah for this role, because he’s fun.

TANCHAROEN: We worked with him on SPARTACUS and he’s great, and we knew he’d be perfect for the role.

AX: Is there a difference in the way you have to tell the actors to interact with the CG on SPARTACUS and on this? Because SPARTACUS had a big CG component, but it generally wasn’t used in exactly the same way as it is here.

WHEDON: Yeah, that was more environment, and this is more effects that you’re seeing interaction with.

TANCHAROEN: And thankfully, we have a cast who is game for all of that.

AX: Do you ever have to give the actors a heads-up when you’ve got a particularly strange set, or strange set of effects that they’re going to be dealing with?

WHEDON: We give them a heads-up on anything that’s physically or emotionally or intellectually draining. And if they’re going to have their clothes off, we give them a couple of weeks’ warning to stop eating carbs.

TANCHAROEN: So they’re not freaked out that they might have to be naked in front of everybody.

AX: In Season 4, you have a 10 PM time slot for the first time. Does that give you anything new?

WHEDON: The puppies are evil and the rainbows fight them.

This interview was conducted during a visit to the MARVEL’S AGENTS OF SHIELD soundstages sponsored by Marvel and ABC during the Television Critics Association (TCA) winter 2017 press tour.