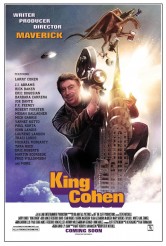 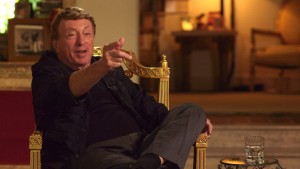 KING COHEN: THE WILD WORLD OF FILMMAKER LARRY COHEN is a delightful documentary about filmmaker Larry Cohen. The term “outlaw” has been applied all over the place to just about everyone and everything less corporate than the Mousketeers, but Cohen really walked the walk – or, more accurately, ran the run. When we see footage of a pair of actors scrambling up a moving airport baggage shoot, and hear Cohen and his performers explain that this was done in a real airport without permits (yes, this was back in the ‘70s, couldn’t happen now, even so), we know we are in the presence of true chutzpah.

Cohen is known for a wide variety of work in so many different genres that, for instance, fans of his 1974 killer baby horror movie IT’S ALIVE may be surprised to learn he created the ‘60s Western TV series BRANDED; people who know him for his black crime drama films, including BLACK CAESAR and HELL UP IN HARLEM, may not realize that Cohen created the influential ‘60s sci-fi series THE INVADERS. This is someone whose storytelling imagination ranges almost as widely as his creativity in getting around budgets and regulations. 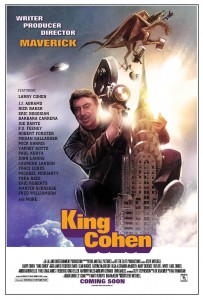 Director/writer Steve Mitchell interviews Cohen – who, in addition to being a writer, director, and producer, proves to be a top raconteur – and plenty of people who worked with him, including both Cohen’s current wife Cynthia Costas Cohen and his former wife Janelle Webb. We even get Martin Scorsese, who hasn’t worked with Cohen, but is simply an enthusiastic admirer of the man. Mitchell provides an ever-lively portrait of a man who is almost literally fearless in pursuit of getting movies made. Whether Cohen is talking about using Betty Ford’s fondness for one of his actors to film on the grounds of an FBI training facility for THE PRIVATE FILES OF J. EDGAR HOOVER or exploiting the fact that the Chrysler Building was being renovated to shoot scenes for Q: THE WINGED SERPENT, his stories are so outrageous that they’d defy credibility if they weren’t true.

Then there are disputes, with hilarious intercutting of Cohen insisting that he threw himself out of a cab to persuade actor Fred Williamson to do the same when cameras were rolling, and Williamson insisting that Cohen did no such thing. Actor Michael Moriarty similarly disagrees, via intercutting, with Cohen about a hairpiece, but here we are shown something deeper. Cohen directed Moriarty on multiple occasions, and the performer speaks with fervor of the complete freedom he felt. Mitchell’s judicious use of film clips illustrates what Moriarty is talking about, and the effect is electric. It’s not just that Cohen created situations that few others would dream of in order to get his movies made, it’s that sometimes he also created something magical in the end result.

The pacing on KING COHEN is dynamic, punched up with striking scenes from his movies and flowing easily from one tale to the next. Mitchell is respectful of Cohen, but both men see the humor in what they’re talking about, which makes for a portrait that is intensely funny and fun, as well as enlightening.