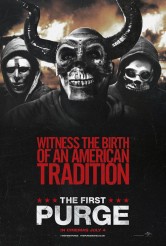 Speculative fiction agitprop, big and bloody as ever 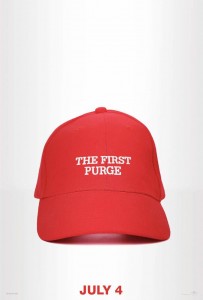 THE FIRST PURGE is actually the fourth in the film series created by James DeMonaco. A prequel to the other three, THE FIRST PURGE shows how the government-sanctioned “Purge,” which we find out was initially confined to Staten Island, New York, and called “the Experiment,” came to exist.

For those who’ve somehow missed the other PURGE offerings, here’s the premise. The U.S. government has decided that it is beneficial to society to have one twelve-hour period every year when all crime, including murder, is legal. This way, everyone can get out their aggressions, leading to peace and safety the rest of the time. In practice, psychos who can afford heavy weaponry take out their aggressions on the poor, especially those who cannot afford shelter.
The first PURGE played out mainly as a home invasion thriller, set in a gated community, though even then its political commentary was clear. The subsequent two films, THE PURGE: ANARCHY and THE PURGE: ELECTION YEAR, were more explicit in their anger at racism. THE FIRST PURGE is as explicit as it can be in terms of the largely white, moneyed power structure exploiting and abusing downtrodden people of color. However, the action is so enormous and outrageous and bloody that nobody is going to confuse THE FIRST PURGE (or any previous PURGE) with a straightforward message drama.

The purpose of the experiment, devised by Dr. Updale (Marisa Tomei), is to determine whether people would act on their aggressive tendencies without the threat of legal consequences. The setting for this experiment is Staten Island. People who don’t want to participate can leave the island before the experiment starts. However, there’s a $5,000 incentive to stay (tracking devices are implanted to make sure no one falsely claims to have been there when they weren’t), with more promised for those who become more actively engaged. The officials running the experiment provide participants with handguns, and glowing contact lenses that double as mini-cameras.

At first, the Experiment is pretty much a bust. The only people displaying violent antisocial behavior are the neighborhood psychos. This isn’t proving the point the government hopes will be made, so they start adding elements. 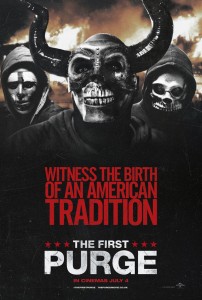 In the midst of all this are ex-lovers Dmitri (Y’lan Noel) and Nya (Lex Scott Davis). Both of them are staying put on Staten Island, but not engaging with the Experiment for different reasons. Nya thinks the Experiment is vile and feels responsible for protecting her neighbors from anything bad that may arise, while Dmitri has a drug empire to protect. Dmitri also happens to be ex-military.

Noel and Davis are both strong, charismatic performers. It’s easy to watch them, even when Davis is made to deliver one of those “you used to be a good man and now you are destroying this area with drugs.” For what it’s worth, THE FIRST PURGE is not necessarily in favor of dealing illegal narcotics, but it seems that as far preferable to false propaganda and paramilitary action on the part of the authorities.

Gerard McMurray directs from a script by James DeMonaco (DeMonaco created the series, writing and directing first three). In true PURGE spirit, the filmmakers go for a combination of mounting suspense, jump scares and high-octane firefights. For PURGE purists, there does seem to be a missing link between the source of violence here and what we see in the other films, but perhaps that will be covered in the ten-part USA PURGE TV series previewed in THE FIRST PURGE’s closing credits. Meanwhile, if you want some tension and major butt-kicking in service of an unfortunately timely message, THE FIRST PURGE is here for you.