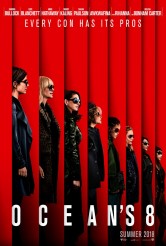 Glossy, deft fun for the most part 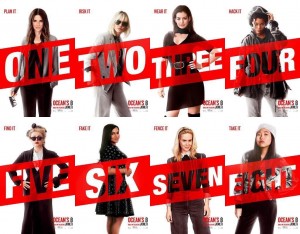 OCEAN’S 8 might be called a spinoff rather than a sequel of the OCEAN’S 11 franchise. The Ocean here is Debbie (Sandra Bullock), sister of Danny Ocean (the character played in the earlier films by George Clooney).

Newly paroled from a five-year prison stint, Debbie has used her time in prison wisely – well, if one’s definition of wisdom is coming up with a lucrative crime. Returning to her old partner Lou (Cate Blanchett), Debbie proposes a bold plan that involves an incredibly valuable diamond necklace, a museum display of royal jewelry, and the Met Gala. Co-conspirators include old and friends: organizational whiz and parent of small children Tammy (Sarah Paulson), and jewelry expert Amita (Mindy Kaling), computer genius Nine Ball (Rihanna), surveillance ace Constance (Awkwafina), and befuddled, famous Irish clothing designer Rose Weil (Helena Bonham-Carter). Superstar Daphne Kluger (Anne Hathaway) is vital to the scheme. Debbie would also like to get back at former boyfriend Claude (Richard Armitage), an art dealer and scam artist who let her take the fall for one of his ruses that went sideways.

There are so many good things in OCEAN’S 8 that it’s hard to know where to start, but perhaps the best place is the overall tone. Director Gary Ross, who also crafted the story, and co-wrote the screenplay with Olivia Milch, creates an atmosphere of alert enjoyment. We’re always paying attention, always finding something amazing for the eye, without feeling either distracted or tremendously stressed out. Then there’s the camaraderie between the women – there are a few disagreements and a bit of teasing, but nothing ever mean. Mostly, they are confident in each other’s abilities and happy to be parts of a well-oiled machine, doing what they’re doing because they’re good at it, not in reaction to men. Almost every scene here passes the Bechdel test. Blessedly, there isn’t the quasi-obligatory fallout over nothing, or even something, that we have to sit through in order to get back to the plot; everyone just gets on with it.

The plot itself is entertaining, laid out so that we can understand what’s happening, but leaving room for some surprises in the concluding revelations. Since not everybody knows one another, or each other’s areas of expertise, it makes sense that the more complicated bits are laid out by one of the characters for the rest. The production design is sumptuous, courtesy of Alex DiGerlando, and Sarah Edwards’s costumes are flat-out amazing. The Met Gala looks like something out of a fairy tale, but then, so does the real-life version.

It’s also pleasing to see some of the more well-known performers play against expectations. Bullock gets to be wily without being whiny, sunny without being overly vulnerable. Bonham Carter is allowed to act at normal volume and has some very amusing silent reactions as Rose tries to work out where things are going and what she’ll need to do next. Rihanna has mightily attractive self-assurance. Blanchett, given the low-key anchor function, give Lou warmth and wisdom and soul. Awkwafina brings deft humor to her exuberant character. Kaling is good is a little underused and Paulson is stalwart. Hathaway has moments of both broadness and subtlety, displaying adroit timing. Armitage, so wonderful in television’s BERLIN STATION, is suitably smarmy, and James Corden is delightful as an insurance investigator.

Ironically, one of the best features of OCEAN’S 8 works against it to a degree. The same lightness that keeps it buoyant also prevents us from working up much suspense – we’re curious about how things work, but not hugely invested, because the stakes (apart from the financial ones) never seem that big.

Then there’s the matter of Danny Ocean. Apparently, he’s dead, and this is brought up a number of times. Surely a film could be made about his sister without the need to create an off-screen bummer ending to the earlier trilogy. It’s not clear if this is meant to explain his absence, which hardly needs explaining; after all, nobody felt a need to discuss where the rest of the Ocean family was in the movies with Clooney. Perhaps this is a misguided attempt to evoke some deep emotion, which flatly doesn’t work and somewhat detracts from the “sisters are doing it for themselves” theme, or (please no) it’s intended as a set-up for a “this time it’s personal” sequel.

These last few aspects aside, OCEAN’S 8 is exactly what it sets out to be: a snappy, gorgeous caper movie, highlighting a lot of top-flight female actors.