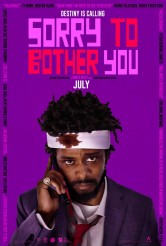 Movie Review: SORRY TO BOTHER YOU 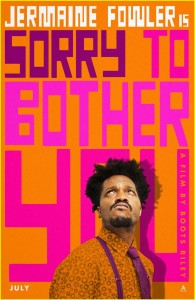 SORRY TO BOTHER YOU is agitprop comedy cinema at its most pointed. Director/writer Boots Riley has devised a wicked social satire that takes on race, economics, the corporate state and more. It’s often simultaneously funny and depressing in how close its outrageousness is to reality. Even when the third act takes a turn into sci-fi, the metaphors are grounded.

Our protagonist, Cassius “Cash” Green (Lakeith Stanfield), is a young black man trying to make ends meet in Oakland, CA. Living with his activist artist girlfriend Detroit (Tessa Thompson) in his Uncle Sergio’s (Terry Crews) garage, Cash takes a job as a telemarketer. Initially, he’s awful at it – SORRY TO BOTHER YOU takes its title from how Cash greets prospective customers – until coworker Langston (Danny Glover) offers a few words of advice, namely, to use his “white voice” and sound successful. This is a rousing success. Awakened to the possibility of actually making money, Cash is at first both responsible and generous. But when ambition kicks in, Cash is caught between new opportunities and old friends.

This may sound like the basis of any number of dramas/comedies/dramedies/you name it, but SORRY TO BOTHER YOU has a much more imaginative take on the subject. At the same time Cash is refining his pitch, several other things are happening. Detroit is preparing for a big show and becoming worried about Cash’s increasing interest in, well, cash. Cash’s fellow telemarketers, led by Squeeze (Steven Yeun), are preparing to strike for a living wage. A company called WorryFree, headed by golden boy entrepreneur Steve Lift (Armie Hammer), offers people three meals a day and lodging (in one-half of two bunk beds per room) in exchange for a lifetime work contract, i.e., legal slavery.

All of these elements come together in ways both expected and increasingly bizarre. SORRY TO BOTHER YOU has drawn some comparisons to GET OUT. Both films share concerns about racism that veer into the fantastic, but where GET OUT starts from a place of comedy about real-world social discomfort that morphs into horror, SORRY TO BOTHER YOU filmmaker Riley plays it broad almost all the way through, though there are a few moments where what’s happening blasts from wild absurdity to the real pain beyond (a sequence in which Cash is coerced into trying to rap simply because he’s black brings up despair). The analogies are clear and precise, and the laughs are big. It’s hard to tell, though, if the impact might be greater if things were played a little straighter, or if the farcical tone is what’s standing between the audience and utter bleakness. 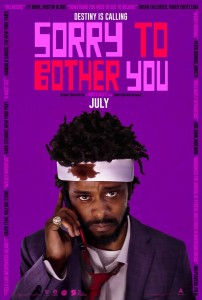 Stanfield is adroit at handling all aspects of Cash’s persona, a feat more impressive when he has to juggle the mostly absurd tone with straight anguish. Thompson shines, especially when Detroit does some performance art in her gallery. Hammer epitomizes the never-my-fault attitude seen so much in the moneyed classes and Yeun is likable. As Cash’s telemarketing supervisor Mr. ___, Omari Hardwick creates a character so silky and salesmanlike that he seems to have stepped out of an Old Spice commercial.

Cash’s “white voice” is provided by David Cross, while his boss sometimes is voiced by Patton Oswalt. The dubbing is not exact, making it unclear whether Riley is trying to underscore that these voices are at odds with the characters’ true personas, or if this is an actual technical glitch. If the former, it’s overkill, since the concept makes the point; if the latter, it seems like a fix was in order.

This aside, SORRY TO BOTHER YOU is an energetic original, both strikingly timely and sadly timeless in its riffs on what ails us all, and how racism makes everything so much worse.