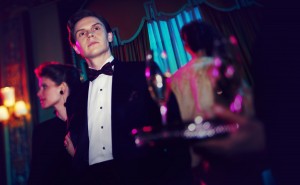 FX’s Sunday-night drama POSE, now in its first season, explores and celebrates New York’s underground ballroom scene of the 1980s. The real-life ballroom world continues today with many changes, but it was and continues to be both a stage and a haven for transgender people, many of color, who compete in costume and dance categories.

Steven Canals created the premise for POSE, which he subsequently developed with Ryan Murphy and Brad Falchuk as a series; Canals serves as a writer and co-executive producer. Previously, Canals worked as an assistant to Dustin Lance Black before writing for DEAD OF SUMMER.

ASSIGNMENT X: A lot of people on the writing staff on POSE are transgender, but you are cis-gender – that is, you are a man who identifies with and maintains your birth gender, which is male. How did you wind up interested in the transgender and ballroom community?

STEVEN CANALS: I was introduced to the balls in 2004 by a professor. I was studying film at Binghamton University as an undergrad. What I was so dismayed by, after being introduced to the balls, was that my parents both were raised in Harlem, and I’m obviously a Bronx native, Afro-Latin, queer, but didn’t know that this community existed, despite the fact that both my parents grew up right around the corner from the Apollo Theatre. It’s like, “How did we not know that these balls were happening?” It was kind of crazy. And as I continued educating myself on the community, and the nuances, and the beauty of the ballroom community, I discovered that the community was built on the backs of trans women. And so this show was always created with the intention of paying homage, really, not only to those intrepid individuals who were part of the balls and survived New York in the ‘80s, but also specifically to the trans community and trans women who really helped to build it in the ‘70s, and who have essentially been erased from history.

AX: Were you introduced by your film professor specifically through the 1990 documentary about the ballroom scene, Paris is Burning, or was it something else?

CANALS: [laughs] Funnily enough, it was through a critique of Paris is Burning. Bell Hooks and Judith Butler both have pieces that they wrote about the documentary, and so we were reading those critiques.

AX: Did you read the critiques before you saw the movie?

AX: Did you ever perform in the ballroom culture?

CANALS: No. I’m not a performer [laughs]. I’ve attended balls, but I’d never walk a ball, no. 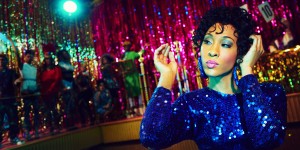 AX: Because ballroom culture still exists today, and it began in the ‘70s, why did you decide to start POSE in the ‘80s?

CANALS: For me, the entry point was always, what makes the story personal for me, is having grown up in New York in the ‘80s, and having my life being directly impacted by both the crack epidemic, having grown up in the projects, and then the HIV/AIDS pandemic. And so I’ve always been fascinated by that particular decade, and what was happening culturally, socio-politically, in New York. Obviously, POSE is just the beginning, but I think that [in] my career, I’ll always be investigating that period of time and what happened in New York, the intersection of race and class and gender, and then that juxtaposed against the nouveau riche and the rise of that era, and just the art and culture and Reaganomics. There was just so much happening in the city at that time, and I was pretty young, but again, my life, and my family, and my parents, were all impacted by that period of time. And so setting POSE in the mid-to-late ‘80s was very intentional. It was about wanting to tell a story about New York City through the eyes of these individuals, who are not just surviving but thriving in the face of all these things.

AX: Obviously not literally, but does POSE sort of spiritually intersect with Larry Kramer’s play about the AIDS pandemic in New York, THE NORMAL HEART, that Ryan Murphy adapted for HBO?

CANALS: I suppose so. The intention right now is for each season of the show to focus on another year of New York. So the first season will be ’87, and currently – this might change – Season 2 would be ’88. And obviously ’87-’88 is when ACT UP emerged and Larry Kramer [became increasingly active], and there’s no way we can tell a story about New York City where we’re learning into the HIV/AIDS epidemic and not talk about ACT UP, and not talk about what was happening at the time. I think what’s different about POSE is that it’s aspirational. And I think in leaning into the show being positive – that’s not to say that we’re not going to show the reality and the truth of what’s happening on the ground level, but I think in wanting the show to be aspirationally positive, we’re giving a more hopeful response to what was happening at that time. So I think, without giving too much story away, we have characters who are HIV-positive, but as opposed to seeing it as a death sentence, they’re using it as a call to live more life. And I think that’s maybe the difference.

AX: And also, you have people who, despite all odds, can perform, can put together a gown, can have Houses that are families of choice, have the meaning of all of that. All of that is very positive …

CANALS: Well, you look at someone today, like Beyonce or Lady Gaga, and you see that influence from the ball community. For decades now, the balls have been at the forefront of fashion and music and dance. And so they’ve completely impacted pop culture, without ever really getting any credit for that.

AX: Do people in the ball community feel ripped off at all by more mainstream pop culture? I mean, do they accept the way the ball culture has been appropriated, or do they feel like they’re not getting proper credit?

CANALS: I think that’s probably a question for folks within the ballroom community, and I think it probably depends on who specifically within the community you speak to. I know that there are quite a number of folks from the balls who definitely can cite influence. They don’t use the language “appropriate.” Typically, when I’ve had conversations with folks who have pointed that out, they always use the word “influence,” which I think is interesting. But yeah, I suppose it depends on who you speak to.

AX: When you originally conceived POSE, did you conceive of it as a television series, or was it a screenplay or a stage play at some point?

CANALS: No, I wrote it as a one-hour drama pilot. I wrote it in a drama pilot class that was taught by Neil Landau, who is a screenwriter himself. He wrote DON’T TELL MOM THE BABYSITTER’S DEAD, and he’s a friend and a mentor. So I wrote that first draft with him, under his tutelage, and after I wrote it, I had a couple of folks who read it, and was actually encouraged to adapt it into a feature-length screenplay. And what I was told at the time, and this was again 2014, is, “I think you’ll get further with this script if it were a movie, because you could finance it and direct it independently.” And I just always saw it as a [TV] show, because like I said, at the core, I wanted to investigate everything that was happening in New York City in the ‘80s. That was what was interesting to me. And looking at all these different segments of New York life and culture through the lens of these individuals who were at the balls, and I thought, two hours is just not enough time to tell that story.

AX: After developing the pilot on your own, how is it for you working in the writers’ room with other people’s input?

CANALS: It’s great. Ryan and everyone, Brad Falchuk, Janet Mock, and Our Lady J, it’s a real brain trust, and it’s like all cylinders are moving. Everyone brings their full selves to the table. Everyone is at the top of their game, and they’re bringing their A game, and I really appreciate that. I’m not precious in that way, so it doesn’t feel like it’s mine – it’s ours, and it’s a true collaboration, as Ryan [has] said. All of us are just so deeply invested in telling the story, and all of us have very emotional and personal reasons for being invested in this world and in these characters. So more than anything, when I originally conceived this idea in 2014, that was all I ever wanted from any collaborators. I didn’t really care who the collaborator was, I just hoped that it would be someone who was as passionate about the story and the world as I am. I received that in spades.

AX: And what would you most like people to know about POSE?

CANALS: That POSE is so much more than just what the headlines have been reporting. It isn’t just a trans show, it isn’t just a show about the balls. This is a show that tackles universal themes. It’s about family, it’s about resilience, and it’s about hope. And so I really wholeheartedly hope that the audience recognizes those universal themes and watches it.