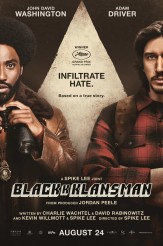 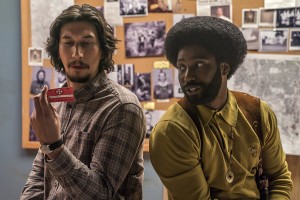 BLACKKKLANSMAN is based on Ron Stallworth’s autobiographical book BLACK KLANSMAN. The facts are incredible, but not in dispute. In the ‘70s, Stallworth (played in the film by John David Washington) became the first black police officer in the town of Colorado Springs. When Stallworth saw a recruiting ad for the Ku Klux Klan in the local paper, he called the number and represented himself as a white racist. He was accepted and moved up the KKK social chain. When the Klan representatives wanted to meet Stallworth in person, he got a white fellow officer to pose as Ron Stallworth, aspiring Klan member.

There is enormous potential for both comedy and drama in the premise. Director Spike Lee, working from a screenplay he co-wrote with Kevin Willmott and Charlie Wachtel & David Rabinowitz, mines a fair amount of both. Washington (a son of Denzel)  plays Stallworth with exactly the sort of level head that one always hopes for in an officer of the law, and with just enough incredulity at what’s going on to keep him real, without tipping over into self-congratulation. Adam Driver as Philip “Flip” Zimmerman, the white police detective who impersonates Stallworth for the face-to-face Klan encounters, proves to be an excellent understated tough guy. We believe he has the ex-military background he claims and that he’s as cool under fire as he needs to be. Laura Harrier has the conviction and gravity of a real student union leader as a young activist who piques Ron’s interest, and Ashlie Atkinson balances pathos and hatefulness as a Klan wife willing to do anything to gain her husband’s approval. Jasper Paakkonen plays said husband with certainty and boundless nastiness. Topher Grace, in addition to not flinching at some of the heinous statements he must make as KKK Grand Wizard David Duke, is made to bear an astonishing resemblance to the actual Duke, who is shown in archive footage.

Speaking of archive footage, good use is made of clips from both GONE WITH THE WIND and D.W. Griffith’s BIRTH OF A NATION. These serve to show that recruitment for the Klan has been part of mainstream American culture, as well as why so many people find both movies profoundly objectionable, regardless of their historical status.

However, filmmaker Lee has got so much on his mind that BLACKKKLANSMAN also at times serves as a framing device for lectures. One of these, while a bit lengthy, fits into the proceedings both in terms of narrative and factual history. The real Stallworth was indeed sent undercover to report on a student union gathering featuring black activist Kwame Ture, aka Stokely Carmichael, played here by an assured Corey Hawkins. Then there’s a speech by Judge Jerome Turner, played by the venerable Harry Belafonte, detailing a horrendous lynching of a child, a friend of Turner’s, in the 1920s. The incident certainly deserves attention, but the speech is used here in a way that is strictly for the edification of the audience, rather than of Stallworth or even Zimmerman, and it’s not even so much an indictment of the Klan than of general savage racism. Again, this is something that should be condemned, thoroughly and in detail, but this feels a little less like something that belongs exactly where it is and a little more like Lee thinking maybe we somehow have missed the message so far. This is intercut with footage of a Klan induction ceremony, which emphasizes the hate group’s fondness for ridiculous spectacle. BLACKKKLANSMAN does a thorough job of illustrating that these people are generally awful and often pretty idiotic throughout – it’s not irrelevant, but it feels a little redundant. 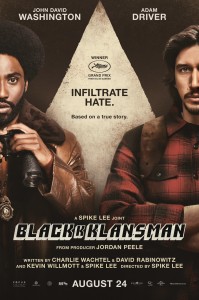 Then there is use of photographs of this historic outrage, and video footage of the 2017 incident in Charlottesville that includes the murder of Heather Heyer. Are we shocked and appalled to see these things in all their heartbreaking awfulness? Absolutely. Can we remember what we were feeling about the movie we were watching before this? Kind of difficult. Is this Lee’s point? If we’re supposed to see the folly in watching any kind of narrative instead of watching documentaries and then taking some kind of direct action, it’s a momentary win, but probably a hard sell long-term to most people who love movies. If that’s not the point, there might have been a better way to send us out of the theatre.

As it is, Stallworth and Zimmerman sort of get short shrift as characters. It seems like it would be interesting to know more about what caused Stallworth to decide to become the first black police officer, and subsequently undercover detective, in Colorado Springs, but apart from what he tells his captain, we don’t see it. We therefore can’t tell what effect, if any, listening to Ture’s speech has on Stallworth – if it’s opening his eyes, or just affirming what he already believes. We know even less about Zimmerman. It is heartening to see a movie that underscores that black people and Jewish people have a vested interest in one another’s civil rights (something that some individuals on both sides often overlook).

BLACKKKLANSMAN winds up being a mixed bag. It’s a fascinating story, told by people with skill and passion, but it also keeps trying to teach us something by adding to it, as though the filmmakers don’t trust the impact of the lessons inherent in the material.