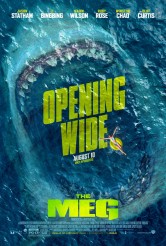 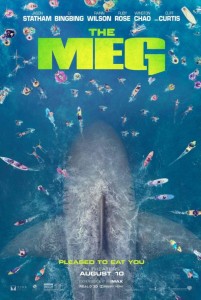 A Megalodon, “Meg” for short, is a species of giant shark that died out several million years ago – or so they’d have you think. Ha! In THE MEG, a team of researchers discovers that the Pacific Ocean’s Marianas Trench goes much further down than previously supposed. Penetrating the cold cloud previously mistaken for the ocean floor within the trench, an intrepid trio from the group finds a whole new ecosystem teaming with life – and then get stuck down there when something (no prizes for guessing what, though we don’t see the creature for a good long while) hits and disables their submersible.

Enter reluctant hero Jonas Taylor (Jason Statham). We meet Jonas in the prologue, where he manages to rescue a submarine crew from a similar depth (and a similar strange impact), at the cost of two friends. Jonas has been so traumatized by that incident that he’s apparently spent the last five years drinking in Indonesia, but since his old pal Morris (Cliff Curtis) is the one who’s asking, and Jonas’s ex-wife Lori (Jessica McNamee) is one of the people who’s trapped, he agrees to get the people out of the submersible.

Here is where one has to ask of the script by Dean Georgaris and Jon Hoeber & Erich Hoeber, based on Steve Alten’s best-selling novel MEG: how exactly does giving Jonas this past semi-failure impact the plot? What would happen differently if he were just an expert deep-sea rescue specialist who comes in because he’s needed? The answer is, nothing. This is what passes for character development here, and it mainly serves to slow down the action and strive for emotional peaks and valleys that it cannot achieve on its own. The extremely fit Statham also doesn’t look like someone who has been succumbing to constant drinking for half a decade. He’s entirely charming in the role, and seems wholly capable of doing rescue work; it’s just the back story that’s a bit of a head-scratcher.

That said, the people of THE MEG mostly make understandable decisions. Their initial goals are reasonable – boldly going where no one has gone before – and their decisions make sense. There aren’t too many moments where the audience yells at the screen, “Don’t do that!” Rainn Wilson’s billionaire does a couple of unwise things, but on the other hand, he gets a lot of good zinger lines, which the actor delivers with verve. All of the other characters ultimately care for each other, demonstrating appealing humanity.

Then there’s the ninety-foot Megalodon shark that finally rises out of the trench and starts causing problems, which Jonas and his employers feel duty-bound to solve. Their solution is to kill the Meg, which naturally is not easy from the outset, and then runs into what could be called a big complication. 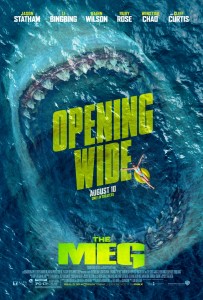 It’s good to see a shark movie that actually has other aquatic life forms in it, even if the sub-Marianas Trench sea floor seems pretty well lit and inhabited by species that ocean lovers will recognize as existing at higher levels. We see a good deal of the Meg, which looks decent, if not spectacular, as giant prehistoric sharks go. The teeth are impressive, but mostly, it has been designed to resemble a Great White of exceptional size rather than something we haven’t seen before.

Director Jon Turteltaub sets up a good sense of menace, but doesn’t manage too many jump scares – it’s hard to hide something the size of a Megalodon, even underwater. One of the best unnerving moments is in the trailer, when canny eight-year-old Meiying (Sophia Cai), exploring the underwater laboratory, sees something alarming outside the glass. There’s also another strong jolt that accompanies a plot twist at the halfway mark.

THE MEG is a serviceable example of its breed, the big-budget attempt to replicate JAWS. It doesn’t reach that level of skill and terror, but for those who have an appetite for the genre, it serves well enough.