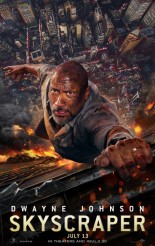 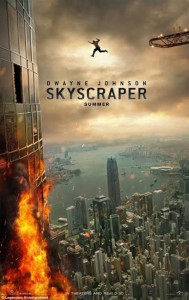 The title of SKYSCRAPER would seem to refer to the 210-story structure where most of the action takes place. “The Pearl,” as it is dubbed, is the (fictional) tallest building in all of Asia. But it’s easy to see where SKYSCRAPER could also metaphorically reference Dwayne Johnson’s character Will Sawyer, a hero of towering height, family love, moral rectitude and physical ability.

Will was an expert hostage negotiator until tragedy intervened. Now he’s a security consultant, who has just been put in line by his former colleague Ben (Pablo Schreiber) for the biggest deal of his life, supervising security for the Pearl. Will’s wife Sarah (Neve Campbell) and two young children (McKenna Melvin, Noah Cottrell) are currently the Pearl’s only tenants in the residential section of the building, which has not yet fully opened. The Pearl’s owner, Zhao Long Ji (Chin Han), lives in a penthouse at the top of the Pearl.

Will lost his left leg in the incident that begins SKYSCRAPER, but when manmade disaster strikes, he’s not going to let a little detail like that – or the fact that he’s not in the building, or that most of the thing is on fire, or that armed mercenaries are trying to kill him and the Hong Kong police force is trying to catch him – stop him from rescuing his family.

There isn’t a whole bunch of plot to SKYSCRAPER – well, actually, there is, but none of it surprises. The point is for the bad guys to make sure the building catches fire and for Will to go in there, save Sarah and the kids, and with less vengeance than necessity, show the evildoers what happens when you mess with a human skyscraper’s loved ones.

It’s pretty much the kind of thing that Arnold Schwarzenegger, Sylvester Stallone, Bruce Willis and Johnson himself have been doing over the years. While some of the stunts that Will executes look superhuman, if anybody could do them, Johnson looks like he’s the man for the job. He’s also soulful and likable, which helps greatly, though he’s not allowed to be as lively as he is in other films. Granted, a man who is worried that his family could die at any moment would generally not be prone to wisecracks, so while this doesn’t show off every aspect of what Johnson can do to full advantage, it makes sense emotionally. 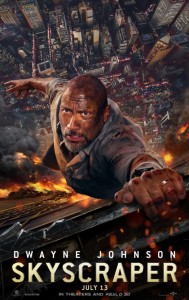 Director/writer Rawson Marshall Thurber makes sure that some of the other characters have agency, especially Campbell’s resourceful Sarah. He also comes up with some fun riffs, like the particular aspects of the Pearl’s roof, even if we can guess how they’re going to be worked into the finale.

However, what we don’t get here is exciting villains. Hannah Quinlivan is intriguing as one of the lesser malefactors, but (probably wisely) Johnson’s Will goes after more sizable adversaries. There’s one who has promise, but he goes early on, and while Roland Muller does exactly what he should with his amoral mercenary, there’s nothing in the character’s construction that lets him shine.

Another issue is that, in some shots where Will is hanging off the side of the skyscraper, the ground, while still far away, seems less distant than it should be considering where he is.

All of that said, SKYSCRAPER is a perfectly serviceable summer action superstar movie. It gives you what its genre promises, inoffensively and energetically, no more, no less.