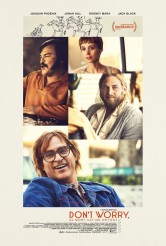 ©2018 Amazon Studios
HE WON'T GET FAR ON FOOT poster
Reviews

Movie Review: DON’T WORRY, HE WON’T GET FAR ON FOOT

A biopic drama that focuses on recovery from alcoholism 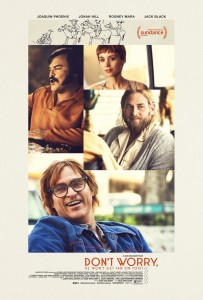 This would seem the height of insensitivity coming from an able-bodied person, but Callahan became paralyzed in an automobile accident, unable to use muscles from the chest downward, though his hands still worked. He found dark humor in his situation, which gave him a singular artistic voice. Callahan also lampooned marginalized groups that he was not part of. Van Sant directed and wrote the screenplay, based on a story by Callahan and Van Sant & Jack Gibson & William Andrew Eatman, which in turn is based on Callahan’s autobiography. Van Sant is no stranger to controversy in his films, but it feels like he’s punting a little with Callahan’s jabs at others. The point is made that the tough humor that gets Callahan through his sobriety is so helpful to him that he can’t see how it would hurt others, and in one case, it seems like his work is actually supporting how certain others would like to be seen, but we never see someone full-on pained by a particular cartoon.

What we do see is John’s adult life, jumping all around in time, from shortly before the critical car accident to the moment when Callahan, clean and sober and successful, is accepting an award. John’s alcoholism is raging while he’s able-bodied, and continues even after he’s in the wheelchair. He finally gets into an Alcoholics Anonymous group led by Donnie (Jonah Hill), where John receives tough love from everyone around him. He gets more engaged in his cartoons, exulting when he is first published; he falls for an independent-minded young woman (Rooney Mara); he grapples with his powerful grief and anger about being given up at birth by his mother.

Van Sant made the astonishing, moving biographical drama MILK about the late Harvey Milk. It’s not that the filmmaker doesn’t connect with his material and characters here, it’s just that he doesn’t seem as inspired as he was in his earlier film by what surrounds his protagonist in terms of the world and the era.  DON’T WORRY, HE WON’T GET FAR ON FOOT makes sense intellectually and emotionally, but it also feels very “good for you.” There is no doubt that the twelve-step program of AA had an indelible impact on John’s life. It perhaps was felt that viewers who have no experience with AA or other, similar programs might need the steps explained to them so that John’s actions make sense. Still, there is so much emphasis on the details of “working the steps” that the movie feels a little more like an infomercial for the benefits of AA than it does like an exploration of a man whose unique view of the world allowed him to live a unique life.

Phoenix is authentic and winning as John, good company for the running time. Hill, who has lost so much weight since his last feature film appearance that he’s virtually unrecognizable, is terrific as the sharp-tongued but infinitely responsible Donnie. Jack Black is excellent in a smaller role, and Rooney Mara is charming if improbable as John’s primary love interest.

In the end, DON’T WORRY, HE WON’T GET FAR ON FOOT isn’t dull, and it has its highlights. It just isn’t a revelatory portrait of Callahan or his work, just a helpful look at how AA can help a soul in distress.